It was all going so well. The ridiculous FA rule changes mean that this is the last major football tournament I can place bets on. Because of my role at Lewes, I am deemed by our governing body that I will have inside knowledge on games like this and so could put undue influence on the players. Absolute laughable. Anyway, the main event and thankfully we can turn over to BBC and have to try and understand what on earth the pundits were saying. Poyet and Fabio were fine – it’s the other two buffoons I can’t understand. Fortunately, there was no shortage of English or Italian beer in the fridge so this one would be a close call.

1. Socks – an early win for Italy on this one with a stylish blue and white number. Nike have really let the side down with their offerings this year and deserve nil points for imagination or effort for the tournament. As adidas say, #allinornothing.

2. Band – Shhhh…do you hear that? Exactly. No “official” England band…thank goodness. Having had to sit/stand next to their out of tune songs on a number of overseas away trips I can feel the relief from thousands of miles away. They’ve been following England for well over a decade, funded by sponsorship yet their repertoire of songs only got as far as “Come on England”, the theme to the Great Escape and of course their Italian favourite, The Self Preservation Society. 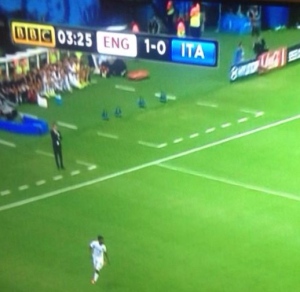 3. Oops – Sterling shoots, the ball hits the stanchion holding the net back, the crowd on one side of the stadium cheers….we all laugh as we can see it didn’t go in. But someone in BBC towers didn’t and changes the score in the top left hand corner to ENG 1 ITA 0….we all saw it so no denying it.

4. Phil Neville – it’s 11pm…people have been drinking for a few hours and they need something to keep them awake. Surely the BBC Sport producers must have done an audition with Neville? What he says is all true and knowledgeable but there is absolutely no passion in his voice. Even the shipping forecast is more exciting than his co-commentary, although not quite in the Townsend league. Surely at half- time Gary would have rung him and told him in a brotherly way to add some “oooooooohs”. The nation is slipping into a deep sleep. I’ve not seen so much criticism for a presenter since Sam Fox and Mick Fleetwood presented the Brits Live.

5. Gary Lewin – not the first time I’ve seen a physio injured – our Lewes physio Nathalie fainted on the pitch last season – but a bizarre injury for him to suffer. I worked under Gary’s tutelage a decade ago for six months and he is a top chap who has worked under Hoddle, Eriksson, Capello and now Hodgson in five World Cups. A sad end to his tournament.  Perhaps the Chelsea physio is conveniently holidaying in Rio?

A close call but ultimately England’s win was down to three different Fuller’s beers (Pride, Honey Dew and ESB) against just the one Italian brand, Moretti.