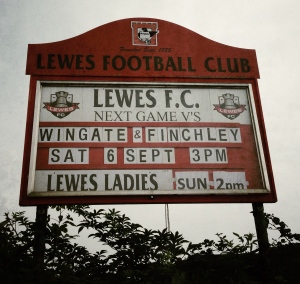 Non League Day.  The best day in the Non League calendar…bar the first round of the FA Cup…or the end of season play-off/relegation six pointer.  And the game after Christmas.  Heck.  Every day is the best day of the season in Non League football.  Non League fans do not need a special day to celebrate all that is great about the beautiful game in its purest form.

Non League Day is about encouraging fans who drive past their local Non League grounds without batting an eyelid every Saturday as they head off to their very expensive bit of plastic.  It is about them trying something new, like a bottle of Schoodlepip (latest beer being sold in the Dripping Pan) and maybe finding something that you like (unlike the Schoodlepip).  Every Non League club needs more fans, more money coming through the turnstiles and more volunteers to help keep the ship afloat.

Last week it was announced that the Premier League had spent over €1 billion in the Summer transfer window. ONE BILLION EURO.  That is simply obscene. Whilst clubs at the top level may think they aren’t a business, they are.  At some point they will need to get a return on investment.  TV deals, head-scratching commercial deals with random partners and selling the naming rights of every part of their stadiums bring in huge sums of money – so much these days that the fans have become almost irrelevant.  And when something doesn’t have a value anymore, you can charge as little or as much for it as you like.  And that is why ticket prices continue to rise, because many clubs actually no longer value the fans who buy the seats in the Fly Azabaijan Airways Family Stand. 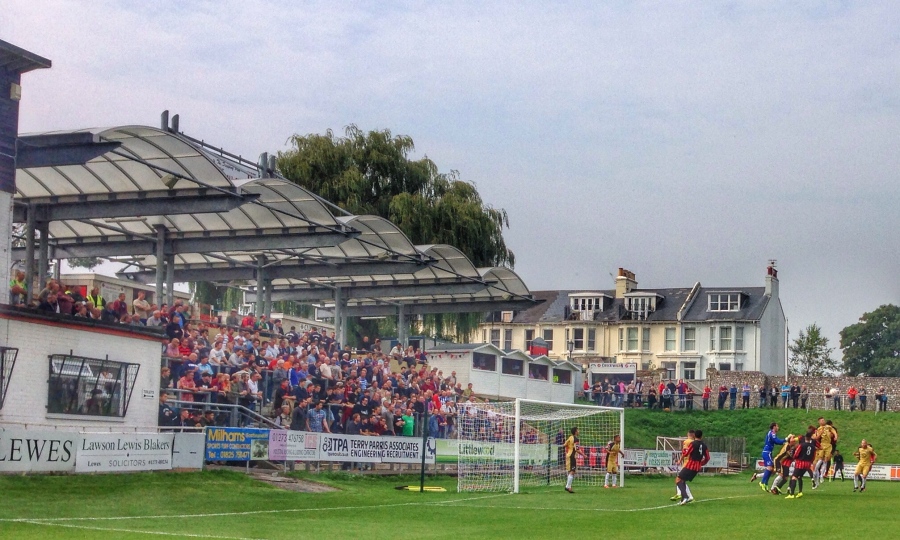 Non League Day gives clubs an opportunity to boost the revenues for clubs that are in many cases living hand to mouth.  The big decision to make is whether to discount your admission prices or not.  Obviously clubs want to get as many through the gate as possible, but who is the target market?  Premier League and Championship fans?  Those who think nothing of paying up to £100 for a ticket.  So will £11 really make a dent in their wallets?  What does “value” mean to them?  Our approach was one to highlight what Non League football was all about – inclusion, community, decent food and beer.  Remember, this was trying to give people a reason to come back time and time again, so perhaps loss leading isn’t the best strategy here.  Of course, some clubs used the opportunity to promote other causes – Dulwich Hamlet’s offer of “pay what you want” would see all of the gate receipts, less their costs, going to charity.  That is a great gesture and ticks the community box completely.  Others, such as Bungay Town decided to offer a punnet of mushrooms to anyone coming to their game.  Was it a success?  Find out for yourself here (just a bit of Funghi).

We were fortunate that we were playing Wingate & Finchley, where one of their directors is Mike Bayly, co-founder and one of the driving forces behind Non League Day.  Plans were soon drawn up for our respective disability teams to play a curtain raiser and with the sun shining, the team on their longest winning streak of the season (one game, three days granted) and Sky Sports in town it promised to be a top afternoon.

The simple law of economics in football is if your team is winning, people will come and watch you, irrespective of the price.  Football fans want to see a winning team (unless they play like an Allardyce team of course). That is why it costs more to watch teams like Chelsea, Arsenal and Manchester United than it does to watch Stoke City, West Brom or Burnley.  A second consecutive win for the Rooks, this time more convincing and less nail-biting than Wednesday night ultimately made Non League Day for Lewes, although they did need a slice of luck to get all three points.

Up until eight days ago it was fair to say that Lady Luck had given Lewes a wide berth this season.  Couple that with some dreadful refereeing and we went into the game last Saturday against Hampton & Richmond Borough with just two points and on a run of four consecutive defeats and with three red cards.  Whilst the game at The Beveree ended in defeat, we played for long periods against ten men and really should have taken a point.  Then on Wednesday Grays lost two players to red cards, both perhaps a big harsh having seen the replays but finally got our first win.  Yesterday it was a snap decision from the referee late in the first half that changed the game.  A ball was whipped across the six yard box and Nathan Crabb, steaming in at the far post, was impeded.  Penalty?  Yes.  Red Card offence?  Harsh as Crabb wasn’t guaranteed to get to the ball. But we weren’t complaining as Miss Luck was flirting with us.  Dixon stepped up and sent the keeper the wrong way.

Half-time saw us try and give away one of our much talked about Beach Huts for a game with a penalty kick competition.  Good laid plans and all that but as the teams re-emerged and we still had three people in the competition, having scored all of their spot kicks I had to use a bit of on-the-spot and out-of-the-box thinking to resolve the contest.  Paper, scissors, stone is an official FIFA approved method to determine a competition, right?

Lewes started the second half impressively, with Nicky Wheeler demonstrating all the tricks in his winger’s spell book.  It wasn’t long before the Rooks doubled the lead when Wheeler’s cross was headed home by Nathan Crabb at the near post.  Two became three in the last few minutes when another Wheeler cross was headed home by substitute Luke Blewden giving the score a slightly unfair reading but did the Wingate fans mind?  Absolutely not.  They greeted the final whistle with a conga around the pitch, under their Sid’s Army banner and wearing masks of Sid James.  Of course, Sid James.

The mood around the ground had transformed in just three days.  That’s the beauty of football.  Non League Day had been a winner for us and let’s hope that up and down the country some of those “on loan” fans see the beauty of the grass roots game and don’t leave it too long before they come back again.