Four months ago Leyton Orient found themselves 2-0 up going into the dressing rooms at Wembley in the League One Play-Off Final.  They O’s were just 45 minutes away from their first visit to the Championship and sticking one over on the Rotherham United manager, Steve Evans.  Nobody wants to see that these days do they?  Ninety minutes later and the players lay distraught on the pitch, having lost the game 4-3 on penalties.  After a forty nine match league campaign, their fate had been settled by one missed spot-kick.  Harsh. 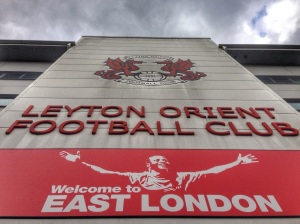 A few months later and the O’s were looking up the table rather than down it. Amazingly, after those exploits last season, manager Russell Slade was under pressure.  The fickle nature of football, combined with a new owner who had bought the club in the summer from Barry Hearn, means that a manager is only as good as his last match, irrespective of what has gone on before.  Slade’s achievements in finishing third last season were impressive, especially with clubs with much bigger resources, and of course, budgets in the division such as Wolverhampton Wanderers, Sheffield United, Preston North End and the anti-club, Milton Keynes Dons.

Whilst The Mighty Rooks would be starting their FA Cup campaign down on the south coast at Bognor Regis Town, I would be in London.  Westfield Shopping City, Stratford to be precise.  Sometimes even I have to compromise between football and family time, and this was a promised treat for the Littlest Fuller.  But then a cunning plan started to emerge.  Get to the Shopping mecca early doors, take family to nice restaurant for lunch and then walk across the Olympic Park for some football.  Genius.  So clever that they agreed to come with me.

I’ve always had a soft spot for Orient, as they always were when I was growing up.  My Dad often used to bring me to Brisbane Road when I was young as the Dad of one of my best school friends, Derek Possee,  used to play for them and so we didn’t used to pay to get in.  I remember seeing a couple of classic games against West Ham here, including the FA Cup 4th Round back in January 1980 when the Hammers edged a thriller 3-2 on their way to Wembley (proper FA Cup Final Wembley, not money-making Semi-Final Wembley), standing on a milk crate at the front of the West Stand.  I remember that stand well, with the tea bar at the back and the rust falling from the roof whenever the ball hit it.  I stood on it for the last time in December 1996 to see Peter Shilton make his 1,000 appearance against Brighton & Hove Albion. 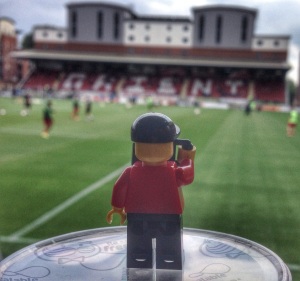 Since then the ground has been totally transformed.  The old West Stand is now a unique-looking stand with steep obstruction free seating and then a huge wall behind it, with various local community facilities inside – a great and innovative use of the space.  In each corner there are the privately owned flats with their balconies that openly flaunt their ability to disregard the Taylor Report with spectators able to stand (STAND!) and drink beer (BEER!) in view of the pitch.  How many of them do you think cause problems each home game? Exactly!

Leyton Orient 0 Colchester United 2 – The Matchroom Stadium – Saturday 13th September 2014
Sometimes things just don’t go your way, and that will be the sentiment of the majority of Leyton Orient fans as they reflect on the defeat to Colchester United. It was a decent game of football, with the home side peppering the visitors goal (16 shots) but failing to really test Walker in the Colchester goal.  There was one incident in the second half where from the view we had in the North Stand, Watt appeared to handle the ball on the line, although most of the crowds view would have been of the keeper diving in front of him.  May be just the angle but looked like a penalty from where I was sitting.

There were a few familiar names in the starting line up for both sides.  Leyton Orient had Jobi McAnuff on the bench, a player who showed considerable promise at West Ham under Pardew but was shipped out far too early. Colchester lined up with Freddie “The new Tony Cottee” and George “son of John” Moncur.  Sears problem was, like Cottee, he was a small, in your face striker.  He, like Cottee, scored on his debut for the Hammers and was then seen as the saviour.  Unlike Cottee, he never really repeated that high and was released by the Hammers. 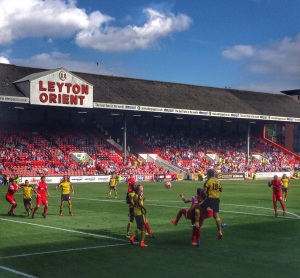 Colchester were forced to start the game with 10 men, as the referee wasn’t happy with the black ankle pads that George Moncur had on over his socks.  The U’s were wearing a black and yellow kit, with striped socks.  Quite what was wrong with that I don’t know.  Good to see he was so hot on those laws of the game but let so many very physical fouls by the away team go unpunished in the first half.  It’s all about priorities, after all.  It did seem that Colchester had been sent out to simply use brute force to stop any Orient attack and it was a surprise that it took twenty minutes for the first name to go into the book, that of Moncur. Like father, like son.

Colchester seemed happy to hoof the ball into the corners for Sears to chase.  They weren’t in the game at all, appearing to have come for the draw.  Just before half time Magnus Okuounghae rash challenge on David Mooney saw him see red and the most ludicrous “stand off” between two aging, plump fans in the East Stand, gesticulating to each other that frankly made them both look very silly.

However, come the second half and Colchester realised that if they played on the counter-attack, using the pace of Sears and Watt, playing it to feet then they may have some success.  Twice they broke, twice they scored.  The first, was less than 10 seconds after Leyton Orient had taken a corner, with Sears the creator.  Five minutes of injury time were announced but still the O’s couldn’t hit the target.  “We’re only playing against ten men” shouted the chap next to me.  True, but with Orient always keeping two men on the half-way line to counter the attacking threat, they lost that numerical advantage. 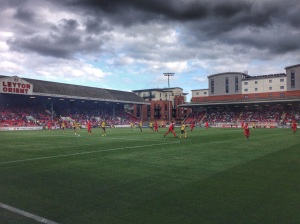 The defeat meant that Slade could be soon looking for another job.  Director Mauro Milanese was the man to pass the message on to Slade from ‘President’ Francesco Becchetti after the 2-0 loss to Colchester.  “The president has been honest enough via Mauro Milanese to tell me we have got one game to sort it out so hopefully we get a response on Tuesday,” said Slade, “That’s in terms of my future, obviously today’s result is not a great one for the football club, these things can happen but obviously the president will want better than that.”

And that, ladies and gentlemen, is why football will one day eat itself.  Senseless decisions made by people who believe they can be the next Manchester City or Chelsea, spending peanuts along the way.  As a neutral it was a very enjoyable afternoon, watching a decent game of football. One game can change the course of a season and I hope for all that Slade has done for the O’s it comes on Tuesday night.