In May 2013, the Football Association unveiled a new five year kit deal for the England national team with US sports giant Nike. As part of the announcement they launched two new kits, much to the annoyance of England fans, who had only replaced their shirts less than eighteen months before. The cost and frequency of change of football shirts are a huge bone of contention with consumer groups, supporters and parents alike, with questions being asked as high as in the Palace of Westminster. 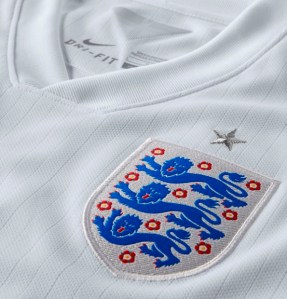 England’s latest kit deal, worth approximately £25million per annum, is the second most valuable ever signed behind the current Nike deal with the French Football Association. This may surprise many people, especially as Nike have been the official partner of the Brazilian Football Association for nearly twenty years. The Brazilian shirt is currently Nike’s biggest selling International football shirt, with over 5 million unit sales expected in 2014. Whilst there is almost an expectation that every nation that qualifies for a major tournament will bring out a new shirt, it has been the announcement of the cost that has caused a major public outcry in England.

With unit sales in excess of 1 million in regular years, rising to 3 million prior to a major tournament, the temptation to bring out a new kit for the FIFA World Cup starting in Brazil in two months was too much for the FA and Nike to resist.
However, few people expected that the latest kit when announced in March 2014 would cost up to £90, a huge increase in the price tag from previous kits. Unsurprisingly, the cost was criticised from every angle, with Radio and TV chat shows dedicated to this one subject. The Shadow Sports Minister Clive Efford commented shortly after the announcement of the new kit, “The game of football seems to be increasingly about profit and commercialism rather than the community and the fans, who have sustained football for many generations.”

The Football Association immediately responded, absolving themselves of any blame, by saying that “The FA’s policy is to avoid any involvement with how its partners/licensees set their prices, so as to avoid any risk of or implications of price fixing”
Whilst it is only the “deluxe” version of the shirt that will sell at the high level, the standard shirt’s recommended retail price is still 20% higher than we have seen before at £60. Still a bitter pill for most fans to swallow. Sports shirts manufacturers have invested heavily in recent years to incorporate the most modern design features and materials into their products, as well as explicitly targeting shirt counterfeiters who have become smarter and more determined. What many so-called experts failed to reference was the fact that the England Rugby Union shirt had been priced at a similar level for a number of years without any outcry. Perhaps that is because the rugby union is perceived to be more of a middle to upper class sport where disposable incomes are higher? Or even that as a more successful side, with two World Cup Final appearances in the past eleven years, they can command a higher price tag.

Unfortunately, it took just a few hours after the public unveiling of the new Nike shirt before counterfeit items started appearing on online marketplace sites, selling for just a fraction of the excessive £90 official price tag. These marketplace sellers offer quantities in excess of 100 units at a time, spreading the counterfeit items quickly across the world. With price tags of less than £10 for the “Player version” it is not hard to spot the fakes from the real ones.  These websites also offer versions without the manufacturers logo at an even lower price – essentially creating a tiered structure of counterfeits. Anyone who has been to the Grand Bazaar in Istanbul, the Night Market in Marrakesh or even Las Ramblas in Barcelona cannot have failed to have seen the thousands of football shirts on sale, some looking as authentic as the real thing complete with genuine manufacturer tags and security measures. They even offer a sliding scale of fakes at different price points.

What many of the manufacturers of replica football shirts fail to realise is that they are dealing with irrational buyers. Football shirts are not like Gucci handbags or Hermes scarves. They are not luxury items. They are lifestyle items. If someone buys a fake football shirt they are still pledging their allegiance to a brand, or in this case country or football club. They know that none of the revenue from the sale will go to the club or the manufacturer but that doesn’t stop their enjoyment of the product in any way at all. Other fans will not look down their nose at them for sporting a fake shirt – in fact the high quality of some of these fakes makes it very difficult to recognise it is so without close inspection. A football fan with £20 to spend on a shirt will spend £20 on a shirt whether it is a fake or not in most cases.

One in six products sold today is counterfeit. In the UK alone it is an industry worth over $40billion. This number continues to rise every year despite attempts by companies such as NetNames to scour the Internet, find the infringing items and removing the offending websites or online sellers from the web. However, with money still tight in many households, high-ticket desirable items such as the England football shirt fuel the growth in counterfeiting.

Manufacturers state that the prices are being driven up by counterfeiters, not realising that by increasing their prices they make the issue worse. They claim that the effect of buying fake ‘knock off’ goods has a ‘knock on’ effect on the price of legitimate products. Every pound, euro or dollar spent on counterfeits is a pound, euro or dollar not spent with the brand owner, reducing the savings from economies of scale that can be passed on to the consumer. Production costs, support costs, marketing costs and legal costs are all higher, which the brand owner must pass on to the consumer – a double whammy. However, in the football shirt world it seems that the price tag is high because they know irrespective of the purchase price, the demand for the product is already there. An England football fan is hardly likely to decide to support France and buy a French football top simply because of a price tag. They will simply seek a cheaper “fix”.

Only time will tell if Nike’s pricing strategy of introducing a premium item at a premium price will work. In my experience of both consumer behaviour and being a fan I would say that football at its most basic level of wanting to show support for a team or country is as binary as it could be – I am no less of a fan if I buy the premium priced shirt or a normal priced one.

The final word on this comes from Football author Mark Perryman:-

“Commercially, if you go back through history, the most successful England shirts in terms of sales have been the ones from periods when England are doing well.

“To that end, I think Nike have got a bum deal because expectations ahead of the World Cup are at an all-time low. People are just not that excited about the England team.

“Who in their right mind thinks we are going to do well in Brazil?”

“Who in their right mind thinks we are going to do well in Brazil?”

I hope you are wrong Mark, but I think you may just be right once again.