Name four teams that have played League football on Merseyside? Liverpool, Everton, Tranmere Rovers and who else? Well go back to the 1898 and Tranmere Rovers biggest rivals would have been just around the corner from Prenton Park. On tip of the Wirral you will still find today the lonely spot of New Brighton, and it was here at the start of the 20th century that league football was being played by New Brighton Tower FC. 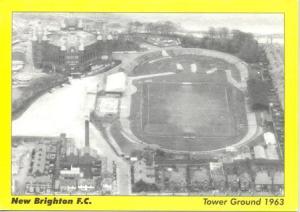 The club were formed in 1896 and moved immediately into a ground adjacent to the New Brighton Tower (hence their name). What made this so unique was that at the time it had a capacity for 100,000, and thus one of the largest stadiums in Britain. The development included the actual Tower, which when opened in 1900 was the tallest building in Great Britain at 189 metres tall, looking out over the Mersey and the Estuary and modelled on the Eiffel Tower. With a ballroom at the bottom, the whole area was THE place to be seen in Merseyside.

The club won the Lancashire League in only their second season and were elected to the Football League in 1898, taking their place in the newly expanded Second Division. Their record in the first season was good – finishing 5th and just three points off 2nd place and promotion. One of the reasons for this success was the club’s intention to sign up as many of the top footballers in the country as they could. After all, who else could offer the bright lights and glamour that New Brighton could at the time? The Football League were aghast at such behaviour and strongly rebuked the club for their strategy.

Did it have any affect? Not really. The club continued to try and offer the best salaries and in the following season they gambled on promotion to the top tier of English football. The local authorities were desperate to make New Brighton an all year attraction to rival, if not beat Blackpool amongst others, and saw a successful football team playing during the winter months as key to this strategy. Unfortunately the gamble didn’t work as less than 1,000 spectators on average saw the club finish in tenth place and then in fourth in 1901. The consortium that had been bank rolling the club admitted failure. They simply could not keep bankrolling the experiment so it was with some relief that the Football League accepted their resignation in September 1901 with their position being taken by Doncaster Rovers.

The ground was still used for other sports including cycling and motor bike racing. However, the company struggled to make anything really work. They even tried a live action Cowboys and Indians show during the summer months of 1908 with over 500 performers.

With the onset of World War One the tower was deemed too dangerous to use, and by June 1919 it had been decided to dismantle the structure. The ballroom and the stadium stayed, although the terraces were reduced in size. In 1921 a new club was formed after the demise of South Liverpool FC, and two seasons later a second incarnate of New Brighton were elected into the Football League 3rd Division North. Initially they played at Rakes Lane close by but after the Second World War games were played back at The Tower, although by this stage the capacity was a shadow of its former self. In 1951 the club finished bottom of the Third Division North and were voted out of the league in favour of Workington.

The club continued to play in the regional leagues, still using the New Tower Athletics Ground but it was clear the future wasn’t bright. Finally, the left home in 1970′s after fire and vandalism had made it unusable, and the ground lay vacant until purchased by a developer who over time turned the site into houses.

Today nothing is left of one of Great Britain’s biggest ever football stadiums bar a memory. The Wirral has returned to a one club area (although Vauxhall Motors may say otherwise), but for a couple of glorious years, one club tried twice to break the mould of English football, and basically failed. Kevin Costner may have been told “Build it and they will come” in his dreams in Field of Dreams, but for New Brighton Tower it was all just a Nightmare on Egerton Street.