Slowly but surely I know you are all coming around.  You are seeing the light, the enjoyment of football in its most basic form.  Non-League.  As the gap between the Football League and the Conference narrows to a point that most teams are now completely interchangeable, you have to drop down a few divisions before you find the beating heart of grassroots football.  Places where people say “thank you” when you give them money at the gate.  Places where children are admitted free, because, as we all know, children are the future.  Places where food is home cooked, the beer is local and the atmosphere is welcoming.  Of course I have omitted Lewes from this list, as although I may be biased, they would win hands down every year.

Nestled in a nook of the South Downs about 10 miles from Brighton, Sussex County League Hassocks won our hearts this year when we visited in pre-season.  The smart little ground is enclosed by fields and trees and overlooked by not one, but two windmills.  I’ve never been to a ground with one close by, so to have two is, well as the Ambassador’s guests would say, “spoiling us”.  Feeling lazy?  Well, you can park your car right behind one goal and not move a muscle.  Come when the sun is shining and have a picnic on the hill behind the goal – if its good enough for Glyndebourne or Kenwood, it’s good enough here! 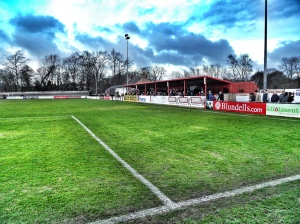 The home of football has to be on everyone’s list to visit.  But history aside, this is a fantastic place to watch Non-League football.  Located in the village of Dronfield in North East Derbyshire, the club has grown up with the Coach and Horses pub next door which is a reason to visit on its own (six Thornbridge ales on tap if you are asking).  Facilities are good with a couple of covered stands and the people behind the club not only have respected the past but are looking to the future for the club. 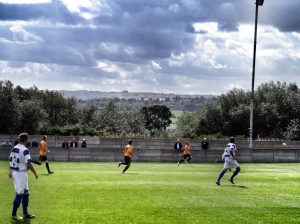 There are few places in England so small that can support two football teams, but Ossett pulls it off in style.  The West Yorkshire market town has a population of just over 21,000 but has two football teams playing in the Northern Premier League Division One (North) who are separated by just under half a mile.  Add in some decent pubs who serve the fine Ossett Brewery beers then you have the makes of a great day out.  Saturday’s when both are at home are few and far between, but if you do find one then sample a half in each – you can easily walk between them during half time.  Ossett Albion is on the edge of the town and has a pitch with a slope that rolls away into the Calder Valley.  The magnificent Peninnes frame the scene perfectly.  Hospitality here is served with a chip butty and a pint of mild. Ten minutes walk away and Ossett Town is an old-school ground with a big stand behind one goal.  The outlook here is definitely urban but the welcome from the locals is heart-felt and well worth the visit.