Football clubs aren’t often the most imaginative organisations when it comes to nicknames. Some clubs see it as an opportunity to leave an indelible mark on the world, thinking up names so obscure that nobody but a small band of followers actually understands why. But on the whole, nicknames are a bridge too far for the PR agents and the marketing executives. So for every “The Nuts & Bolts” there will be three or for “Reds”, each “Monkey Hanger” is bettered by a dozen “United’s” and of course for every “Shrimper” there is half a dozen “Rovers”. 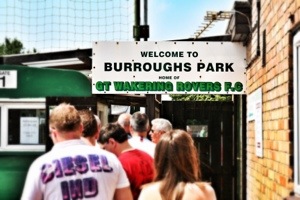 And that is the story of today, the hottest day of the year. In the deepest, darkest part of South East Essex is a place called Foulness Island. Not high up on the list of “Best Places in Europe to Visit 2013” according to Trip Advisor, but actually one of the most important areas of land for finding Brent geese no less. This flat, virtually uninhabited areas of Essex doesn’t see many visitors, as the roads and rails from the west stop at Southend-on-Sea, Britain’s 101st biggest settlement and home to the world’s longest pier. To the local’s it is simply Las Vegas on Sea. Home to Lee Evans, Phil Jupitas and James Bourne (what do you mean who? Do you not know anything about rock music???), it is also the Friday and Saturday night traditional entertainment spectacle of “Cruising”.

Having spent a year working in Essex, and actually occasionally going out with a genuine Essex girl (born in Essex, owned a white handbag, had a tattoo before they were trendy) I remember this ritual. “Where shall we go tonight? ” I would ask. “Cinema, Opera, Ballet?” I would offer as options. “Let’s do daarn Saafend and cruise” would come the response. Driving up and down the Essex Riviera with music pumping out of the car was the nocturnal pleasure of choice. I think I only kept going out with her because it was a cheap date…

Anyway here I was back in Southend. Well, skirting about the edge of Southend to find the little village of Great Wakering, sitting on the edge of Foulness Island. Great Wakering is “well served” with numerous historical pubs, according to the T’internet so I was looking forward to sampling some local beer before watching the biggest match in these parts in years. Local derbies don’t get much bigger in these parts than Great Wakering Rovers v Southend United I can tell you…Rovers v The Shrimpers. One-nil already to Southend United who resisted the urge to simply call themselves “United”. Come on Rovers you can do better than that surely?

Like our two games last Saturday, this was a once in a blue moon opportunity for the Non League club to make hay whilst the sun shines. It is not often they have the chance to face a Football League side, and especially one sitting on their doorstep. Back in 2006 over 1,150 squeezed into Burroughs Park for this fixture and it was hoped that now social media has been invented that the word would be spread far and wide to bring more people to this game. 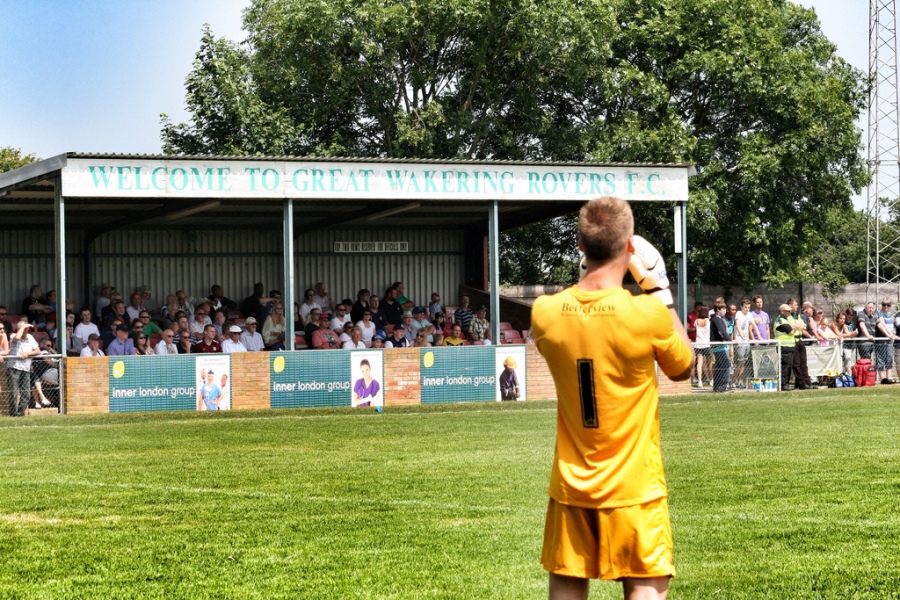 GWR, as they are now known to me, were until a season ago a Ryman League club, but in one of those rare moments of Isthmian League correctness, were relegated for finishing bottom of the league. Last season they narrowly missed out on bouncing straight back by finishing 4th in the Essex Senior League. Whilst GWR were running out against Sporting Bengal United last April, The Shrimpers were running out at Wembley in the Johnstone’s Paint Trophy in front of 50,000. Different worlds.

But these games aren’t about seeing who has the biggest balls or loudest music, it is about generating some much-needed revenue for the clubs at the grass-roots. When I am in charge of football in this country I will make it mandatory for all league clubs (Premier or otherwise) to play two friendlies per season against local non league teams. Some already do it – Charlton’s annual friendly at Welling United normally attracts three of four times the normal league crowd (ironically taking place today), and my beloved Rooks will be hosting Brighton & Hove Albion for the second successive year in a few weeks time. Simple, but effective.

Uni…sorry, The Shrimpers had a mixed bag of a season last time out, with the trip to Wembley being the highlight and the removal of manager Paul Sturrock just a few weeks before that game undoubtably the low point. The ham-fisted attempts to justify the decision didn’t put the club in a positive light which is more than can be said for new manager Phil Brown who appears to have spent far too long under an UV light.  According to a Shrimpers expert, Peter Miles, the club was in a bit of a mess, and would be making the short trip to Great Wakering in a mini-bus such was the lack of players signed up.

The early kick off was to stop any clashes with the other big events in the town.  The Robin Hood Country Show was in town, with cowboy-related fun for all the family whilst just across the way was the About Your Dog Show.  Life here in Eastern Essex is never dull that is for sure.  I avoided the temptations of both, but made a note that the Wellesley Hospital was having a Varicose Vein Open Evening on the 10th July – all welcome, tea and biscuits provided before arriving in the pretty village of Great Wakering.  Football fever had gripped the village, with even the local allotment owners delaying tending to their marrows for a few hours.

Great Wakering Rovers  2 Southend United 3 – Borroughs Park – Saturday 6th July 2013
In the end Southend United breathed a huge sigh of relief as they made their way back down the Eastern Avenue.  For the first thirty minutes of this game they had been completely outplayed by a team who will be playing five levels below this season. Despite starting brightly with the Rovers keeper pulling off the first of many great saves early doors, Southend fell behind after just three minutes when the impressive Gary Paterson smashed the ball home from 20 yards. 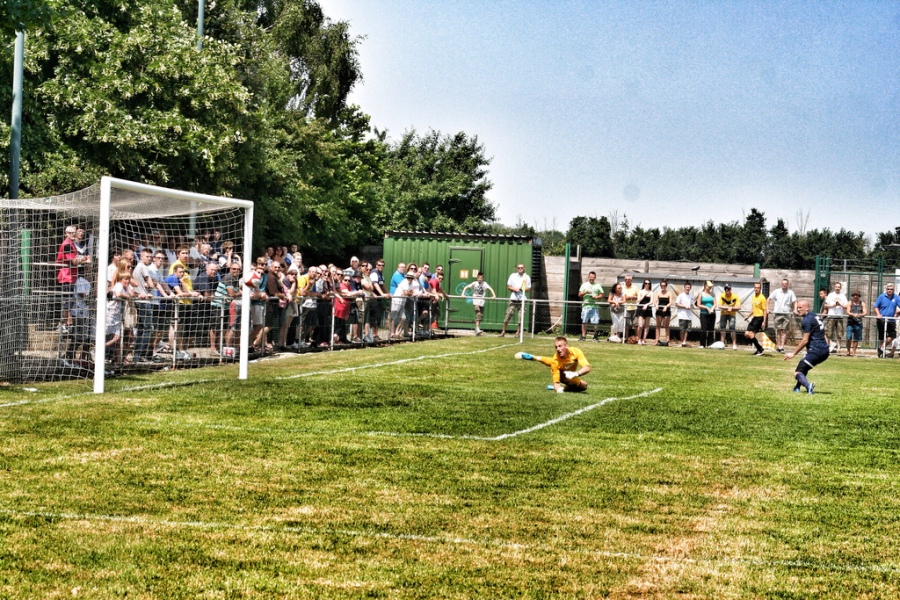 The vast majority of the 913 in Borroughs Park had come to support Southend but soon saw that this would be no pushover.  I felt decidedly out-of-place without either a tattoo or a Southend shirt (or both) as the locals took the opportunity to strip off and enjoy the sunshine.  After a drinks break (I fear this will become a regular occurence in football, with TV companies welcoming the opportunity to sell more advertising revenue), Paterson showed his Non League class by robbing the Southend defenders and walloping the ball home from the edge of the area.  Half time – GWR 2 Shrimpers 0.

Phil Brown ventured out of his dugout to catch some rays at half time, deciding to make just the eleven changes to his team.  Whatever he did and said worked because within 60 seconds of the second half the Shrimpers pulled one back as Taylor shot home through a crowd of players from the edge of the box.  The Southend line was being led by Freddie Eastwood, the one-time terror of the Non Leagues at Grays Athletic.  He had certainly lost a bit of “timber” from the last time I saw him at Coventry City and was a constant threat in the second period.  Despite the heat it was a decent game, played in a good spirit. 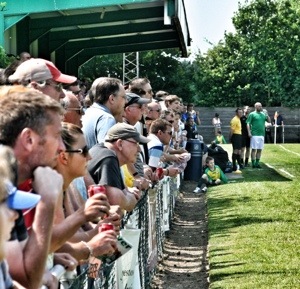 With ten minutes to go Auger drew the visitors level with a decent curling effort and then in the final seconds that man Eastwood fired the ball home to give Southend a 3-2 win, ironically the same scoreline in the corresponding friendly fixture last season.

As I was leaving a couple were walking into the ground, confused that a game was going on.  “Has it started?  It’s not 3pm yet!” the chap asked me.  I explained it had been a 1pm kick off and he said “Bollocks.  I assumed it was 3pm and went to the About My Dog show first.”  He then gave his wife a look that would kill..”Don’t even like dogs either”.

So the Shrimpers ran out winners, which they of course should have based on their league position, and of course, their nickname.  So let me leave you with a couple of more bizarre nicknames to go and ponder (and ultimately look up on Wikipedia). 1. The Dolly Blues

2. The Knitters
3. The Riversiders
4. The Terras
5. The School of Science

Answers on a postcard to win a random old book from the TBIR Museum.