Every day I get dozens of emails, promising me the world in return for a little bit of sponsorship.  However, few prick my interest as the one last week that was inviting me to a press conference at Wembley FC where ex-England manager (and footballing “Technical Advisor”) Terry Venables was going to make a big announcement.  Well, Tel and Budweiser.  The American brewing giants had got involved with the club last year as part of their commitment to the grass roots game.  That and the sponsorship of the FA Cup, which of course lives in at Wembley Stadium, its arch casting a shadow of a sunny Vale Farm pitch. 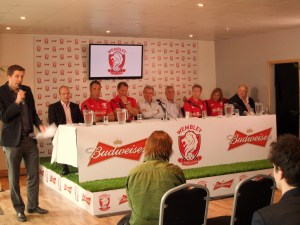 When I arrive I am taken aback.  We were last here for Hendon (their tenants) v Lewes back in September.  Since then the place has had a lick of paint or two, and the brand new clubhouse gleams.  Our hosts have laid on food for the waiting throng – and I mean a throng.  I had been worried I would be the only person here, but the room is packed.  Around 100 people are gathered to hear what this is all about.

Around 1.15pm the top table is filled.  Eyes move from the stunning blonde in her Budwesier red dress to the assembled ex-professionals.  Introducing them as “legends” may be stretching it a bit far but David Seaman, Ray Parlour, Greame Le Saux and Claudio Caneggia certainly raise an eyebrow in the room.

BBC 5Live’s Mark Chapman introduces the “team” which would also be boosted by Martin Keown (“too ugly for press conferences” quipped Chappers) and US international Brian McBride.  The “veterans” would be lining up for Wembley in the FA Cup this season.

Venables told us that they had “all” been working with Wembley’s squad of 30 players for the last month or so.  Woah – hang on.  First up, what non league side has a squad of 34?  Most get by on the bear bones.  In fact Lewes on occasions last season (granted it was in the King era) had a match day squad of 13.  Secondly, what team starts pre-season a week or so after the season end?

The head of marketing for Budweiser talked about this being the model for their investment in English non league football.  It was also announced that ESPN would show the team’s FA Cup games live on TV this season, and that Umbro were the new shirt manufacturers, complete with a Budweiser logo on the shirts. 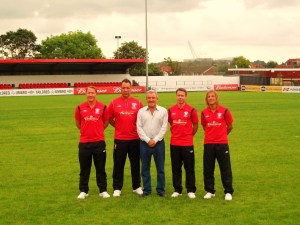 Questions came from the audience, although most were directed at Brian Gumm, the chairman of the club about how this would work.  “Will they be available for league games?” (if they want to play, although the promotion is around the Budweiser FA Cup), “Is it fair on other clubs?” and “Why Wembley?”. The whole “project” is also being recorded by US film maker Evan Weinstein, seven times Emmy winner, under the title of “Dream On”…

Quite what other areas of Non League football will make of this I do not know.  Certainly it will raise the novelty value in the Combined Counties League, not seen since AFC Wimbledon played at this level some years ago.  As their motto says, “From Possibility to Reality”.