“On the fourth day of Christmas my true love sent to me, an away trip that fills you with glee.”

Who doesn’t love a football away day.  Bunch of mates, a few beers, being beaten senseless by the police, stones thrown at you by local yobs, missing the last train home and paying £200 for a cab.  Bloody brilliant.  Last year we rated our top three away days as Neath, Spakenburg and Malta.  This year the decision was much tougher but after looking at the pictures from all of the places we went to we came up with the following top away days of 2011. 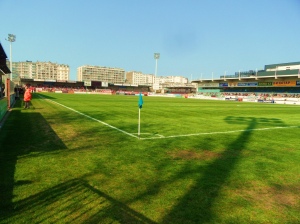 Did you know that Ostend is actually nearer and quicker to reach by car from London than Birmingham is?  Nor did we until we decided to take a day trip there in April for the game versus Royal Antwerp.  Sure, it was a “bubble” game, and OK there was a bit of water canon action on stand-by but we also have beers on the white sandy beach, saw Jack Nicholson (or someone who looked like him), had our photo with Miss Belgium (North Coast) 2011 and saw a football match with enough action to keep any euro-sceptic happy.  For £60 and an hour in the car Ostend is a cracking day out. 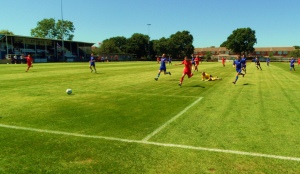 When we stumbled on the fact that the Island Games would be held on the Isle of Wight we were literally checking every day for when the fixtures came out.  We booked up as soon as we could and on a foggy June day we boarded the ferry from Portsmouth with four games on our agenda.  As soon as we docked and made our way to Cowes, the sun was shining for the opening game of the tournament with Isle of Man taking on Götland.  Our day then took us to Brading for Greenland v Rhodes, East Cowes for Ålund v Samareema and finally to Newport for the Isle of Wight’s comprehensive win over Ynys Môns.  Four games in one day for the price of a beer at City Airport.  Days like these only come around once every blue moon. 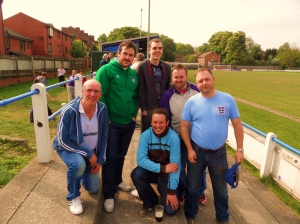 Let me take you back in time to Friday 29th April.  The day the world turned on their TV’s to watch the Royal Wedding we headed north.  At the moment the happy couple said “I do” we were parked up in a service station near Doncaster on the A1. Even when Big Deaksy shed a tear when he caught a glimpse of her dress on the TV we carried on regardless.  For our venue was Wakefield FC in their last ever game at their College Grove ground.  Ever since we had declared the day Royal Wedding Avoidance Day we had gained a number of followers who also wanted to share the day with us.  So in a small corner of West Yorkshire, in a stand made of scaffolding and polythene some of the most influential football writers met, chatted, oogled the best looking physio in the non leagues and then slapped ourselves on the back for avoiding all of the patriotic drivel.

More pictures from a fantastic day out can be found here.