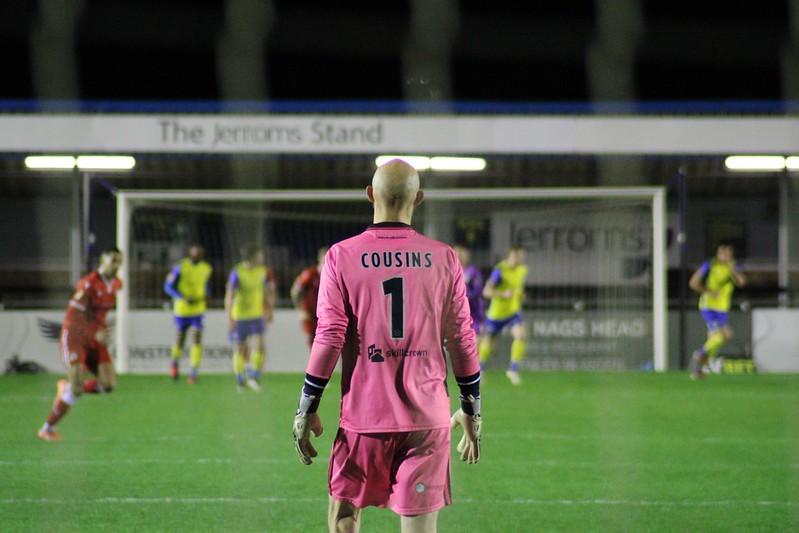 Whilst the feel-good stories were being heralded by the major radio broadcasters on my Saturday afternoon journey about fans being finally allowed back into games and the undoubted impact that would have to the home teams, I took my place on the side of the pitch in a deserted Damson Park, home of National League Premier Solihull Moors.

Whilst there had been some good news this week about fans being allowed back into grounds in Tier 3 in very limited numbers, that only applied to ‘non-elite’ clubs which mean the West Midlands side would be hosting this game in front of the TV cameras with no fans still allowed to attend.

The West Midlands club have only been an entity since 2007, formed as a merger between Solihull Borough FC and Moor Green FC. The new club kicked around the lower reaches of the Conference North for a few seasons before being promoted as champions in 2016. They avoided relegation in their first two seasons at Step 1 under the management of former Blackburn Rovers keeper Tim Flowers, who guided them to their highest ever league finish in 2018/19 when they finished runners up to Leyton Orient. In the play-offs they surprisingly were beaten by AFC Flyde at home in the Semi-Final stage. In last season’s truncated season they finished 9th, with Flowers departing for Macclesfield Town in January.

The visitors Bromley continue their patient rise up the footballing pyramid. Fifteen years ago they were playing in the Isthmian League Division One, step 4 of the Non-League game. A win in this game would take them to third in the National League with the Football League firmly in their sights. Their ambition on the pitch has been matched with the facilities being built at Hayes Lane to make it ready for the EFL should the call come….apart from the 3G pitch which has been a major revenue generator and allowed them to be where they are today, but that story is for another day.

It was eerily spooky taking a position opposite the main stand alongside a couple of other photographers and a club official whose job was to retrieve and clean any balls that ended up in the stands. The social distancing arrival of both teams ruins the impact of the referee taking the ball from the plinth but as soon as the action got underway it was football without any visible COVID-19 restrictions.

Damson Park is dominated by the smart main stand that has a row of hospitality boxes above the covered seats, which were sparsely populated with guests. The impact of having to play in front of no fans is visible when you see that – the club are incurring the ongoing costs of operating a professional club but the opportunity to gain revenue is limited due to the restrictions. The club could have easily managed a decent crowd of a few hundred last night, in a socially distanced manner.

The first half started slowly but as the game progressed the away side looked the more dominant. Moors welcomed back Adam Rooney into the starting line up but the former Salford City striker only lasted until the 40th minute before he limped off.

Moors keeper Ryan Boot was forced to make good saves in the first period from Bromley’s Michael Cheek and Liam Trotter but he was finally beaten in the last minute of the half after an excellent cross by Chris Bush was well met by Cheek, giving the keeper no chance.

The second period saw Bromley sit back and look to counter attack, which drew pressure from the home side. Moors had a great should for a penalty with five minutes to go when Ward appeared to be man-handled to the ground but the referee waved play on.

Three points for Bromley saw them rise to 3rd in the table whilst inflicting the first home defeat on Solihull Moors this season. There’s no doubt with fans in Damson Park this would be a tough place to come to play but the current restrictions are tough both on and off the pitch for the home side.