It’s a Tuesday night in early December. It’s freeing – no surprise there – and I’m the only person to align at Stansted Mountfichet station.  A loan taxi gets his hopes up as I walk towards him but he’s not going to be lucky this time.  My mind is focused on food and football, in that order. 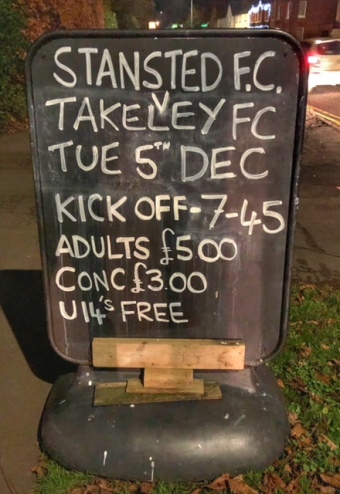 Fortunately, I’ve arrived in take-away city by the look of it.  Quite why a village of 5,500 needs so many eateries is a mystery to many, especially when they appear to be quite literally in direct competition – the Mayflower and Lams Chinese takeaway guard the entrance to Station Road, trying to lure the passing trade (me) in with offers such as “unlimited prawn crackers” and “free chopsticks with every meal”.  Ruthless marketing, I tell you.

My relationship with Stansted Mountfichet is one of pure convenience.  Many a traveller will have been seduced by the thought of a visit to the House on the Hill Toy Museum, reputed to be the largest of its kind in the world, whilst others over the years will have arrived, suitcase being pulled a few metres behind like a disobedient dog, searching for the airport terminal.

The latter, wayward tourists would be too far out of their way.  Stansted Airport lays three miles to the east, 5 minutes on the train.  Originally a US Airforce base on the edge of the village of Stansted Mountfichet, it was taken over by the government and for a short period acted as a Prisoner of War camp before being developed as a commercial airport in 1966, today handling nearly 25 million passengers, one of which in just twelve hours would be me.

Despite Christmas approaching, work travel had not started to wind down for the festive period which meant that after flying out of Stansted on Monday morning, arriving back on Tuesday, I was about to go through the whole process again.  Rather than driving the hour or so back home I’d decided to stay at the airport so the 4am start became a much more reasonable 5am one.  CMF was hugely impressed that I chose to stay in a Travel Tavern than go home to her.

As luck would have it (genuinely), there a game to go to see almost on the doorstep of the airport.  Not just any old game either – a local derby pitting one of the front-runners for the Essex Senior League title with a team currently on an alarming and rapid slide down the table.  In these parts Stansted FC versus Takeley is talked about in hushed tones, normally reserved for the likes of Ossett Town versus Ossett Albion or even the Dunstable Derby.

To say that Stansted FC were having a bit of a ‘wobble’ was an understatement.  It had been nearly two months since the side had experienced the joy of a win and came into the local derby on a run of eight consecutive defeats that had seen them fall to just three points off the Essex Senior League.  Takeley, on the other hand were firmly looking at the opportunity of promotion to the Isthmian League North.  With two teams likely to move up to step 4 of the Non-League game from the Essex Senior League at the end of the season they had been there or there abouts all season, off the back on an impressive home record that had seen them take 31 points from a possible 33. Not bad I suppose.

The home side had had little to shout about for a number of years.  They still talk about that team in and around the ground.  That team being the one in season 1983/84 that not only won the Eastern Floodlight Cup, The East Anglian Cup and the Essex Senior League Cup.  Oh, and a small matter of the FA Vase, beating Stamford 3-2 at Wembley Stadium.  Fast forward to 2010 and the team finally won the Essex Senior League but inadequacies with their Hargrave Park ground saw Witham Town promoted into the Isthmian League. 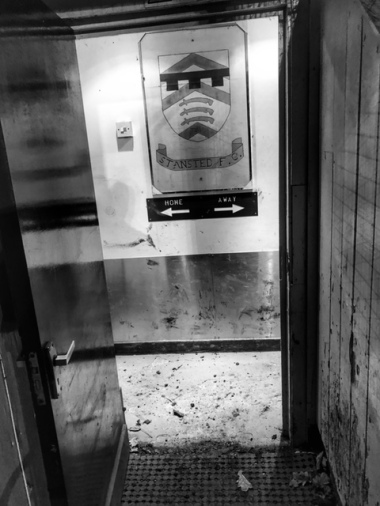 The internet is great for finding out facts such as Stansted’s record win came in that golden season when they beat Coggeshall Town 15-0, their assistant manager when they had their big day out at Wembley was Glenn Hoddle’s Uncle Dave or that an anagram of the name Takeley is Teak Eye but on this occasion it failed to mention that the 0.5 mile walk from the station to Hargrave Park should only be attempted with oxygen.  Granted it is not in the league of Stocksbridge but it was a bit of a shock to the system having just taken advantage of the freebies offered by the Chinese takeaway(s).  Note to village council – open a pub about halfway up the hill for unfit, random Non-League football fans who arrive by public transported.

I actually knew a resident of the village, who had promised to accompany me to the game.  Kevin is an accountant by trade and supports Everton, so he needed some escapism from the reality of pessimism.  What better way to lift the spirits than watching a Non-League game on a day and freezing night along with a few dozen other hardy souls.

You can understand why Hargrave Park didn’t quite make the ground grading for step 4.  It has a very shallow, albeit full of charm, main stand with a small cabin that reminded me of Santa’s workshop from various films that was the committee room.  Around the pitch the perimeter was a series of metal barriers, the ones used to keep screaming kids away from their pop star idols, or grandmas trying to get to Cliff Richard, which if I had my health and safety hat on would worry me considerably.

The teams were warming up when we arrived which involved, in Takeley’s case, smashing the balls as hard as they could from the penalty spot at a teenager in goal which either hit in or flew over the bar and into the gardens of the houses behind.  The referee suddenly appeared at our side, through a magic door on the side of the main stand, shook me by the hand (perhaps confused by my Lewes FC jacket) and said “Right, let’s get this circus pumping” before heading onto the pitch. 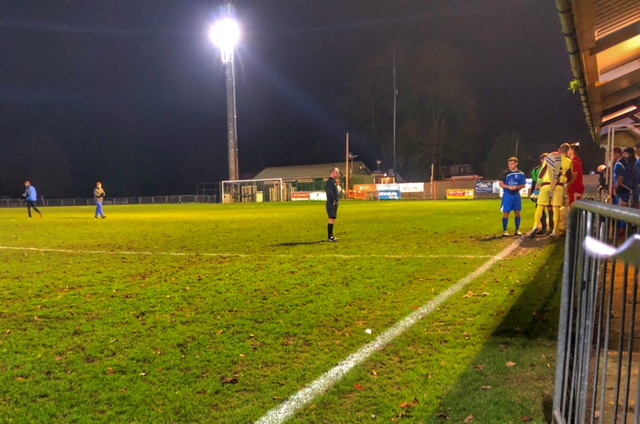 As for the game itself?  The differing fortunes of the two sides was clear to see as the first half wore on, with Takely opening the scoring through the impressive Mullings.  Whilst Stansted tried to break down the visitors, especially down the left-flank, the final ball was often misplaced or simply not there at all.  There wasn’t much between the two sides for long periods but a slice of luck with some cream on the side saw Takeley double their lead when a wickedly deflected shot from Todd saw the Stansted keeper flat on his arse as the ball trickled despairingly out of reach.  Mullings scored a cracker of a third late in the game when he flicked the ball up and volleyed home from the edge of the box.  Whilst the score line may have flattered the visitors, there’s no denying they were the better side.

With only one train an hour back to the airport I ducked out a few minutes before the end, gaining momentum from the strong wind as I headed down the south face of K2, avoiding the Chinese takeaway wars and onto the platform.  Mission accomplished.

Life is all about taking the opportunities as they are presented to you and I think I can quite-rightly claim 9/10 for making the most of an otherwise boring night in a hotel at the airport with nobody for company apart from a bunch of sales reps and overseas visitors who believed the hype that Stansted was actually in London.