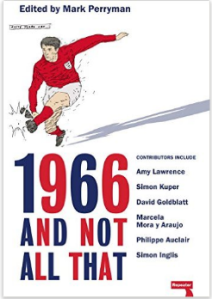 In celebration of the 50th anniversay of our greatest ever footballing day as a nation, below is an extract of the chapter I wrote for Mark Perryman’s excellent book ‘1966 and Not All That’.  The book looks at the build up to the 1966 World Cup from a social and a sporting aspect in England as well as containing updated match reports 50 years on, written by some of the finest footballing authors around today (plus me).

My chapter focuses on the changing nature of the travelling English football fan in the last 50 years, starting 4 years before the 1966 World Cup in Chile and finishing up with the run up to the European Championships in France last month.  If you want to buy a copy then head over to Amazon by clicking here.

Have tickets, will travel

The England squad that travelled to the 1962 World Cup in Chile had to endure a flight with two separate changes to Lima where they played a warm up game against Peru before moving onto Santiago, then Rancagua where they would play their group games and then bus to their base in the Braden Copper Company staff house in Coya, some 2,500ft up in the Andes.  The journey of over 7,500 miles would have taken them more than 24 hours.  Hardly an ideal preparation for the tournament.  Very few fans could afford the high cost of travel (around £4,000 in today’s money) or the five refuelling-stop flight to the Southern Hemisphere on a BOAC Comet, meaning that England played their games in the Estadio El Teniente in Rancagua in front of less than 10,000 locals.   Today, that same journey would take 13 hours and cost as little as £500, with no stops. On the basis of England’s travelling support in the past twenty years several thousand would follow the team should they ever play Chile away in the near future.

When Walter Winterbottom’s squad left these shores for Chile in 1962 it was from the Oceanic Terminal at London Airport.  Four years later, when the squads for the 1966 tournament landed on English soil, the airport had a more familiar ring to it – Heathrow.  It would be from departure points like this that the shift in our boundaries as fans would start.  The travel revolution was still a couple of decades away when the 1966 World Cup kicked off on 11th July with England taking on Uruguay in front of nearly 88,000 fans, but there is no doubt that the staging of the tournament in England changed the perceptions of whole communities in terms of overseas visitors, the like of which many English people had never seen before.  If the North Korean, Argentine and Mexican fans could travel halfway around the world to support their countrymen then so could England football fans from Consett, Corby and Chatham.

It would however be a further 16 years before England fans got the opportunities to really experience what it was like to be a Football Tourist.  Four years after the tournament in England, Mexico offered better opportunities for the travelling fan than Chile ever did but still the cost and the misguided perceptions created by the media of what visiting foreign countries was really like restricted the number of supporters prepared to travel to Central America.  However the 1970 FIFA World Cup did see the first attempt to create an official England supporters travel club for those now intending to follow the team overseas.  The England Football Supporters’ Association offered members who wanted to travel to Mexico the opportunity to travel on an organised trip to watch the tournament, with travel, hotels, a full English washed down with pints of Watney Ale.  The downside?  Fans would need to part with between £230 and £250 per person for a three week trip, or around 8 weeks money for someone on the then average UK wage of £32 per week, around £7,500 in today’s money. Britain was on the verge of a recession, after the “never had it so good” Sixties.  The typical demographic of football fans at the start of the decade was more likely to spend their money on a new Ford Cortina or Teasmade for their semi-detached in suburbia.

English football in the intervening years between 1970 and our next appearance in Spain in 1982 went through a radical change.  To many, the watershed moment in the development of a culture of following club and country came two years earlier in Italy when England qualified for the new-look European Championships.  Thousands of fans travelled by plane, train and automobile to the group games against Belgium, Spain and hosts, Italy. This was a new generation of football fan who had not previously had the opportunity to watch their nation play in an international tournament. Many of these fans, only used to the passionate, if sometimes unruly terrace culture of England simply weren’t prepared for the way the Italian authorities treated them.  With few having experience of watching football abroad, many didn’t adapt their behaviour and faced with a new foe in the Italian police and the locals too, the English responded, by running riot.

Despite the experience of being tear gassed, or worse, or two years later even more fans headed to the World Cup in Spain. For some the appeal would be to repeat the Italian experience, while for others just like the Scots and Northern Irish they would bring their very English version of carnival football to the World Cup for the first time since 1966. This was the first major tournament where individual English national identity would come to the fore.  Whilst the English fans would still confusingly be waving the Union Jack, the Scots and the Northern Irish defined their support as ‘anyone but English for decades to come.  Spain was the founding moment for the Scots’ Tartan Army, whilst the mainly Unionist Northern Irish support would put their politics aside and proudly wear their own Northern Irish Green then, and ever since.  The Scots and Northern Irish, perhaps not weighed down with the expectations of a nation on the pitch, made the most of their time in the sunshine off it, while the troublesome reputation that wrapped itself round England at Italia ’80 was resurrected once more across the tournament at Spain ’82 too.

That reputation stayed with England and their travelling support for a number of years, and was one of the main reasons why the nation’s group games in the 1990 World Cup were held on the island of Sardinia.  The Italian police felt that by containing the fans in one place for the first part of the tournament would be a benefit for all.  Despite a tepid start and scraping through the group on goals scored, England woke up in the knock-out stages and gave the fans belief that nearly twenty five years of hurt could be put to rest.  Of course penalties were our undoing in the semi-finals but the national team had a new identity amongst the fans and the media back home.

To read more then buy the book!