It seems that finally footballing authorities are starting to take notice of the growing voices of the genuine fans on the subject of ticket prices.  Last weekend the mass walkout at Anfield with Liverpool leading 2-0 not only grabbed the headlines but could be argued to have such a distracting effect on the team that they conceded two late goals.  On Tuesday night Borussia Dortmund fans showed their displeasure at being charged £55 for a ticket for their trip to Stuttgart by raining tennis balls down onto the pitch during the game.  With so much money gushing into the English game there can be little reason why ticket prices continue to increase in many cases at rates well above the level of inflation.

Every club wants to play in front of capacity crowds and whilst some will offer discounted admission for some games, such as cup ties, where season ticket holders do not get automatic admission, come Premier League time and the prices increase.  Some clubs are desperate to increase capacities, trying to meet finite supply with almost unlimited demand.  The economists among us will know when that happens price equilibriums can be manipulated by the supplier, a situation that is leading to the anger in instances such as at Anfield where Liverpool fans could be charged up to £77 for a ticket in their new stand next season. 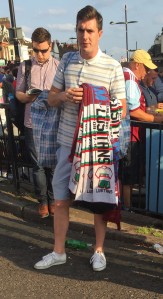 The English game has never been so popular.  In a statement issued by the Football Supporters Federation after the Anfield incident, Chairman Malcolm Clarke suggests that rising prices will lead to  “Stadiums filled with tourists waving “half and half scarves and taking selfies”.  I’d actually say in many instances that is one of the reasons why ticket prices continue to rise – the number of overseas visitors attending Premier League games has never been higher, filling the vacuum left by English fans unable or unwilling to pay the increasing amounts for a ticket.  Again, simple Economics 101 suggests that “half and half” scarf sellers would pack up shop tomorrow and do something else if there was no demand for their product.

Clarke claims the money from the new £5.1bn television rights deal, due to kick in from next season which will see every Premier League club receive a MINIMUM of £99 million in revenues for the three years after that, could let every supporter into every home game and still bring in the same revenue as this season.  Yet it is unlikely that wholesale price reductions will be seen in England next season.

Last year’s BBC report on the Price of Football painted a relatively healthy picture of clubs offering low price tickets but the results on some levels were flawed because they asked the clubs to submit information rather than researching the situation and looking at the average cost of tickets. Headline figures of the “cheapest ticket” for instance often related to one game where the club discounts all tickets for a particular purpose rather than the cheapest average ticket cost across the whole season.  At West Ham United for instance, the cheapest ticket is listed £25, which it is for the pre-Christmas game versus Stoke City. The game before, versus West Bromwich Albion the same seat would cost you £45 (for a ‘Category A’ game this would rise to £70). The Hammers also take the prize of having the highest away fans ticket price at an eye-watering £85, yet also offer many games at low price where more often than not the ground ends up being full, such as the Europa League games in the summer or the FA Cup ties against Wolverhampton Wanderers and Liverpool.

You can argue about the “value” of a ticket as well.  Leicester City fans would certainly say they are getting value for money this season but what about at Chelsea where it hasn’t been the happiest of seasons to be sitting in an £82 season for some games.  Any price increases will be easier to swallow based on the success of the season, although even a Foxes fan may baulk at a 100% price increase next season should the club owners decide to.

Whilst many Premier League fans have been priced out of the game and now get their football kicks further down the pyramid in the Non-League game where £20 can buy you admission, a programme, beer and a burger rather than just a Thai Green Salad Emirates Burger at some stadiums, their places have been filled with the overseas visitors.  Visit Britain published a report in 2014 that revealed over 800,000 tourists to Britain in 2014 attended a football match whilst here, spending around £684 million in the process.  It is not just tourist that enjoy football matches; out of the 800,000 total, more than 40,000 international business visitors went to a football match during their stay in 2014, with Manchester United, Arsenal and Chelsea the three most popular destinations.

The findings show that football is the number one sporting draw for international tourists to Britain. Of those visitors who gave their primary journey purpose to the UK as ‘watching sport’, 73% said they had attended a football match. Around 40% of those going to a football match said that watching sport was the main reason for visiting the UK.  However, the stumbling block is often access to genuine tickets, with most clubs operating a Members-only policy for the very limited amount of tickets that are put on sale for Premier League games.  Some clubs will try and drive visitors to hospitality or travel packages instead potentially at the expense of those hardcore fans who can no longer afford the basic ticket prices.  What is clear though is that any attempts by fans to protest with their feet and not attend games will simply see their void being filled by these “tourists waving half and half scarves and taking selfies”

The protest by the Liverpool fans last weekend certainly created some waves but it may take a concerted effort of protests from other fans, potentially those willing to make the sacrifice of walking out of matches to make the clubs sit up and listen.  The Premier League currently has a valuable asset in terms of full stadiums, but if empty seats start appearing in games being broadcast around the world ultimately rights holders will value the product less and so the knock on effect could be a lower value deal in three years’ time, consequently meaning less money for the clubs involved.  Remember, greed and gluttony are both deadly sins.