Up and down the country teams who haven’t had the best of starts to the season will be encouraged by the fact they come into the first game of the new year unbeaten in 2016. Yep, we’ve all said it, more out of hope that our team’s fortunes will miraculously change simply because the calendar has rather than through any other event. Of course, for those fans who follow a team in the top four leagues the prospect of the transfer window now being open brings the hope that you may sign someone who will turn your season around, or get an opportunity to offload someone who has been the root cause of your problems.

Down here in the seventh tier of English football we don’t have the same type of transfer window. Ours is more of a fly screen which can be opened at will. Few players at our level are on anything more than a nod and a wink contract, with the mystical 7 Day Approach process often the only thing standing between that key player shooting you up the table or seeing you fall through the relegation trap door. I don’t really deal with that side of footballing affairs. Give me a notebook, a pen and a little video camera and send me off to watch a game and I will give you a full tactical analysis of a team, their strengths and weaknesses, set-piece routines and quality of pies on a nicely presented PDF within 24 hours. But ask me which form needs to be signed by our new Spanish winger (no word of a lie by the way) and where to send it then I’m lost. Thank goodness for Club Sec Kev and his magic cardigans is all I will say.

Suffice to say that if someone puts in a “Seven Dayer” you have a week to convince the player to stay with you. My idea would be to play on the ‘caring, sharing’ perception of our fantastic community club. A bunch of flowers delivered to Mrs Centre Forward, some sweets for Holding Midfield junior or a case of Becks for Goalkeeper’s flat mate. It’s all very well the club’s chairman trying to lay on the charm but when it comes from their nearest and dearest it tends to resonate more.

Alas, it normally comes down to cash. You will have managers who are simply better negotiators and persuaders than others but nothing peaks the interest of a footballer than money, especially at this level of the game. By money I also mean opportunity costs – the reduced time (and cost) of getting to training, the fact we never fail to pay players on time, that we have a very cool shirt manufacturer and sponsor.

But back to today. It’s the start of a New Year and a win could put us top of the first 2016 table. Well, when you’ve had such a desperate 2015 you will cling to any hope. 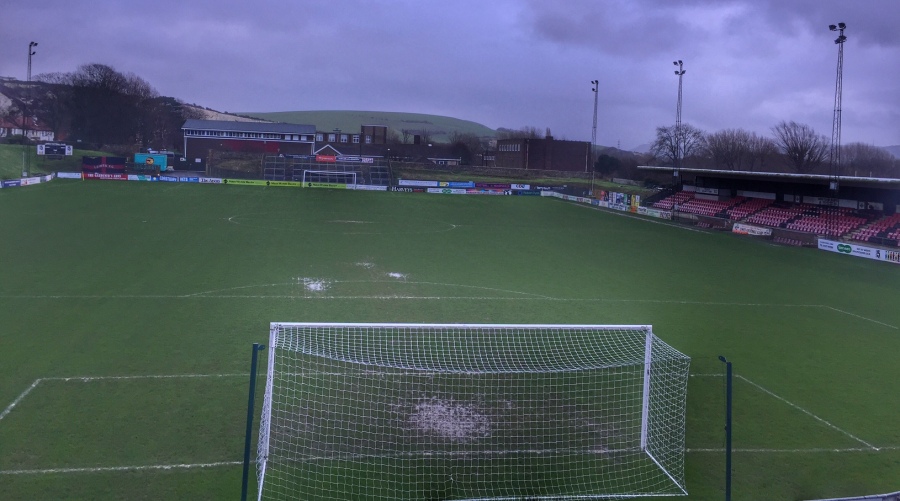 The first victory of the day was over the elements. Heavy rain overnight may have dampened the pitch but not the spirit of everyone at the club. Alas, in true Lewes style the elements rallied and scored a late equaliser. At 1pm when the referee arrived, the pitch was playable. At 1.45pm after over half an hour of heavy rain it wasn’t. By the time I arrived at 2pm and congratulated myself at being able to park outside the ground for the first time this season fans were heading in the opposite direction.

At 9am the pitch was playable. At 11am it was almost good enough for a garden party. At 1pm when the officials arrived it could have hosted world championship bowls. Then it started to rain….and rain…and rain. At 1.45pm the referee decided that the conditions were bad enough to warrant an inspection, and consequently, postponed it. “You should have communicated the game was in doubt” said one fan. But the game was never in doubt until the referee said it was. Five minutes later it was called off. You can’t make decisions on contingent liabilities. The heavy rain was forecast from 9am. It didn’t materialise until 1pm. Of course, we could have communicated that the 3pm kick off was subject to final approval of the officials but then that’s the same for any game. The pitch could be too hard, the snow could obliterate the lines on the pitch, the wind could cause structural damage, the ice could make spectating areas dangerous. Only the referee can determine how the weather conditions impact on the game. I totally get the frustration of anyone who travelled to the game but we could only work with absolute facts and not what ifs.

So instead of watching The Rooks I headed down the road, along with a fair few other Rooks fans plus a smattering of Whitehawk fans also without a game, to watch over the young ex-Rooks (Peacehaven & Telscombe) play older ex-Rooks (Hastings United). Not quite the afternoon I had in mind but having travelled so far, I couldn’t go home empty-handed.

Peacehaven & Telscombe 0 Hastings United 4 – The Sports Park – Saturday 2nd January 2016
Just before Christmas, Peacehaven announced that they were going to cut their playing budget. The announcement went on to explain that the decision, whilst a very difficult one to make knowing the potential ramifications for the team, was in the best interests of the club. Most of the senior, and potentially bigger weekly earners had departed, leaving manager Simon Colbran with a very young squad. However, despite their age and experience, and Colbran’s absence due to illness, Peacehaven put up a strong fight against a Hastings side who would still consider a play-off spot as a realistic ambition this year. 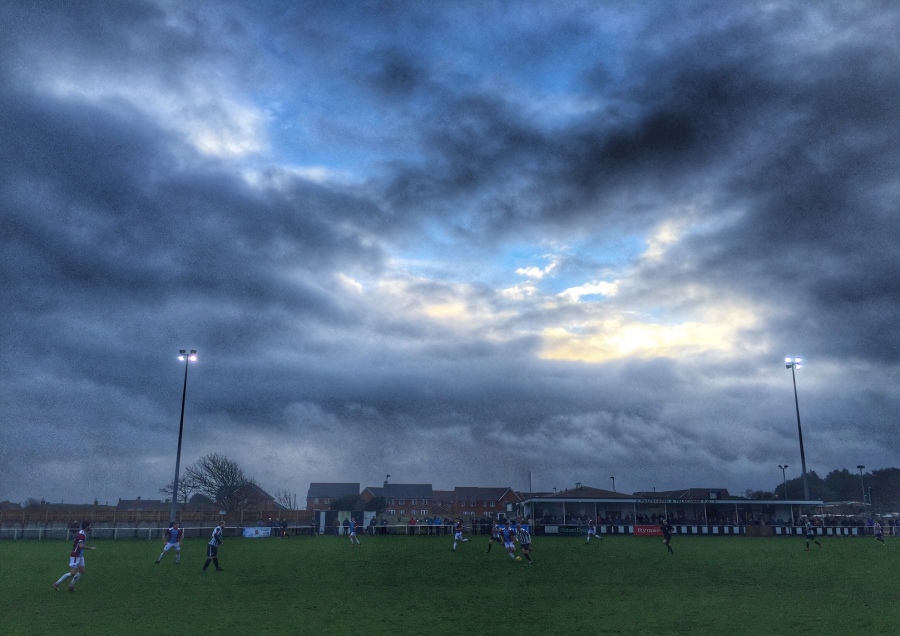 With the postponement of both Lewes’s and Whitehawk’s games, Peacehaven saw a significant increase in spectators – we simply cannot deal with a Saturday afternoon without our football – which hopefully translates into some additional cash into the budget for them.  The 250-odd fans will have seen a decent, open game, played in testing conditions.  Peacehaven certainly had their chances to equalise Billy Medlock’s early goal for Hastings in the first half, hitting the bar and missing a couple of great opportunities.  Players slipped and slid around the muddy pitch, with the referee letting the game flow as much as possible.  Hastings scored a second when former Rook Sam Cole finished off an excellent move that ripped apart the home defence to give them a comfortable lead at half-time.

The second half saw Hastings dominate, with conditions worsening.  The Peacehaven keeper struggled to stay on his feet on many occasions but he could do little with the two late goals.  First, a Sam Adams free-kick seemed to stick in the air due to the wind, and despite trying to re-judge where the ball would finally come back to earth, it slipped from his grasp and Richardson-Brown tapped home.  The scoring was complete when Cumming-Bart shot from the edge of the area after some neat build up play.

Whilst Hastings walked away with three points, Peacehaven can also pride themselves on being winners.  Not only did they manage to get the game on (or perhaps have a referee who wanted to officiate a game despite the conditions) but they also competed for long periods with a team short on experience and age.