Living in a hot-bed of Premier League and Championship fans (oh, and Millwall), Non-League football sometimes doesn’t get a look in.  It’s all Chelsea, Charlton Athletic, Arsenal and West Ham in these parts (oh, and Millwall), yet on our doorstep there are some grassroots clubs who are doing quite nicely too.  Of course they’d all like more fans, but it is hard to move the Soccer Saturday crowd from their comfy sofas.  Just down the road from TBIR Towers is Badger’s Mount (yes, I know it technically should be Set), home of Cray Valley Paper Mills, a club who currently play at step five of the Non-League pyramid, or in words that a Premier League fan may understand, eight promotions underneath them.  They’ve built up a nice set up, with a tidy ground, new well-appointed club house and thriving youth football.  They also share their facilities with fellow South Eastern Counties League side Erith Town, and it was the tenants rather than the landlords that I was wandering down the road to watch in the FA Cup Preliminary Round.  Doing my bit for the environment you could say, by walking.  The fact that The Park Tavern enroute had a beer festival had no bearing on my mode of transport at all.

The clubhouse was heaving when I arrived, not due to an influx of Groundhoppers, although there were a fair few of them too clutching their plastic programme wallets and discussing the merits of Britain’s smallest Wetherspoons (The Banker’s Draft up the road in Eltham apparently).  There was a wedding reception on.  South East London’s finest with 50 shades of orange, had taken over the club. I would imagine when they booked that they had no idea they’d be sharing their big days with a bunch of Dockers of Erith and Christians from Horsham. However, with a decent crowd for yesterday’s cup game against big-spending Hasting United and the profits from the function, it will have been a “nice little earner” for the club over the weekend.

The winner of this tie could look forward to hosting Burgess Hill Town in the First Qualifying Round as well as a cheque for £1,925.  At this level, with most players on sub-£100 per week wages, that is a decent boost to the budget. Horsham YMCA, not that long ago of the Ryman League, came into the game as favourites at kick off, sharing a five-way lead in the Southern Combination League and still unbeaten whilst Erith had two wins from three games in the league.

The Dockers of Erith used to have their own stadium, in Erith, called bizarrely, The Erith Stadium.  A relatively impressive multi-use facility owned by the council. And therein lay the issue.  The club used to turn up to find grass unmowed, goal posts absent and huge holes in the pitch from shot put competitions.

Happier times indeed here and within touching distance of welcoming The Hillians.  All that stood between them and a potential £3k in prize money was the Young Man’s Christian Association of Horsham.  Not that you’d have known that’s who they were judging by the language from their bench during the game, which included an impressive three-hyphenated swear word at the linesman at one point.

Erith Town 2 Horsham YMCA 4 – Badger’s Mount – Sunday 30th August 2015
And so to the action.  First thirty minutes it was all square with little to write home about.  Then Horsham took the lead when midfielder struck from close range. Erith’s response took ten minutes when Tom Garrick beat the offside trap, dance round the keeper and slotted home.  Horsham should have gone in at half-time in front but for Sullivan’s powerful goal bound shot hitting an Erith player on the line squarely on the chest, knocking him into the net in the process.

Ten minutes into the second half Horsham took the lead from one of the many free kicks awarded on the edge of the box.  Dan Evans strike clearing the wall and the keeper.  Number three arrived soon after, centre-back Matt Crane headed home from a free-kick then Brown made the tie safe with his second and Horsham YMCA’s fourth.  Despite a late Garrick goal for the Dockers, poor discipline in the second half in conceding so many free-kicks had been their undoing. 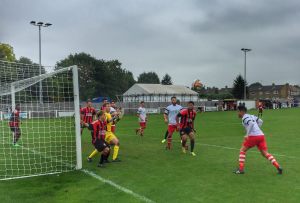 With rain looming overhead and an approaching bus that run to the end of my road it was just too tempting.  Of course I hopped off one step early and stepped up the pace so I arrived home all of a fluster.  My reward for my healthy afternoon, a beer or two “because I’d earned it”.  Who doesn’t love the FA Cup?