We all pay our money in the hope of seeing a cracker.  The beauty of football is that it can deliver five goal thrillers, end to end action and a few 22 man punch ups.  It can also deliver dull, turgid and frankly mind-numbing action.  Alas, it is more often the case that it is the latter rather than the former we witness.  Picking the three worst games wasn’t too difficult.  One was so bad that two of a group of ten of us actually fell asleep in the game, although the copious amounts of free German beer may just have helped. 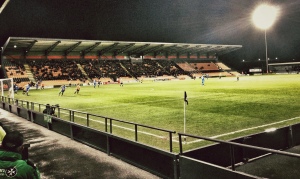 With 90% of football in England washed out, an opportunity presented itself to visit a new ground – The Hive, home of Barnet (the Bees – clever that!).  An easy journey all the way on the Jubilee line, passing the ground as we went.  Barnet, managed by the volatile Edgar Davids were in relatively good form, the visitors less so.  At £10 this would have been way too much for what was on offer, but nearly double it and it was possibly going to be the worst value game of the year, even 4 days in January it was that obvious.  The afternoon’s gloom was lit up by two things.  First was the winning strike from Dani Lopez and the second was watching the rare occasions when two tube trains crossed as they passed the ground. 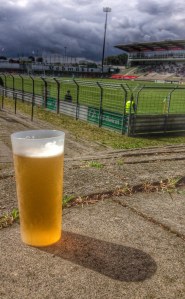 Even the joys of an EFW can sometimes be outweighed by a turgid game.  This one was so bad that not even cheap beer could keep Danny Last and I in the ground until the final whistle as we bunked off with twenty minutes to go, missing the one and only piece of action of course.  Nothing against Lubeck, and their fans who were magnificent, it was just that this game needed to be forgotten as quickly as possible so that we could get on with the rest of our weekend. 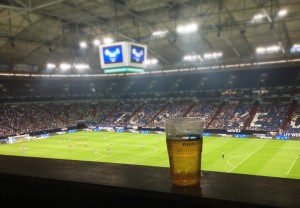 A proper Jolly Boys Outing with ten of us heading for the bright lines of Gelsenkirchen as West Ham played in the inaugural Schalke Cup also featuring Newcastle United, Malaga and of course Schalke 04.  We arrived, having already drained Stansted Airport out of most of its alcohol and sat through the second half of a dreadful Newcastle performance against Malaga.  Of course, West Ham under Allardyce’s new regime of “attacking” football would put it right.  And if they didn’t then the magnificent surroundings of the Veltins Arena and its free bar (complete with a not-so free barmaid according to one of our party) would.  Alas, it was the most forgettable, negative, dire performance many of us could remember (and some of us remember a long way back) as both teams seem to have agreed to play for penalties from the first whistle.  Our party started falling like flies, whether it was to sleep or table football rather than watching the game.  Never again.

Tomorrow – The best Footballing Day out of 2014 – which games couldn’t we remember, which matches provided 90 minutes of pain in an otherwise great day out.