It’s been another top year of football over at TBIR, taking in 76 games in 12 countries, including visiting four continents.  It’s not always about football though, and that is reflected in our choice of the Best New Ground visited during the last 12 months.  Our judging criteria?  Simply the grounds that make us want to back time and time again, irrespective of the quality of the game and the atmosphere.  It’s an aesthetic thing.

Our winners last year were Sheffield FC’s Coach and Horses Ground, Arundel FC’s Mill Road and The Guldensporenstadion, the magnificent arena of Belgian aces KV Kortrijk.  It is the most anticipated award in our set of twelve, the one that has seen our message pass around the world in Christmas spirit.

So to this year’s winners.  We saw games in 21 new grounds this year, but that’s just the football – we also visited half a dozen other grounds to sample sports including Baseball, American Football, Cricket, Rugby Union, Rugby League and Aussie Rules Football.  And that is where we start with this year’s top three.

The MCG is a legendary venue – It is the 11th-largest stadium in the world, the largest in Australia, the largest in the Southern Hemisphere, the largest stadium for playing cricket, and has the highest light towers at any sporting venue. It drips history and should be one of the stadiums to see on a world pilgrimage of stadiums.  Alas, the football season had ended when I was in Melbourne back in June, but the Australian Rules season was in flight and so I got to experience my first taste of Australia’s famous past time – drinking pots of Coopers Ale.  Oh, and a game between Richmond and Sydney.  Thirty thousands were in the famous crowd, creating a bit of noise, but you can just imagine what it is like on a Boxing Day test.  Spine-tingling.

As you approach the new national stadium of Romania your breath is taken away by the superb architecture.  It is built like a Greek temple, sitting high on a mound, with uniform columns and arches around the whole ground.  Whilst the inner area of the stadium isn’t anything special, spartan in fact, the actual bowl itself is a cauldron of noise.  A canopy roof, held in place by huge TV screens ensures that the cold Romanian nights are kept out and the white-hot atmosphere is kept in.  Already highly rated by UEFA, with the 2012 Europa League final being held here. 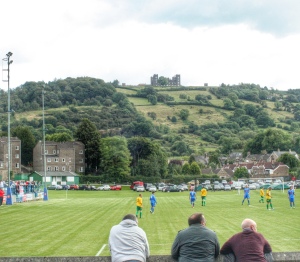 Following in the footsteps of Belgium, Germany and Poland comes….Matlock.  A town of 10,000 people on the edge of the Peak District Park in Derbyshire, home to Northern Premier League side Matlock Town.  And quite simply, one of the best grounds you can visit in the world.  Of course there is the heart-felt Non-League hospitality, the tip-top pie and peas but it’s the views that are the reason why Causeway Lane has scooped this year’s award.  A three-sided ground sat in a bowl with a spooky Scooby-Doo inspired castle on the hill looking ominously down on the game.  Words fail to sum up the beauty of the ground so I will leave it to my pictures from the visit back in August here.

Tomorrow – The ying of the yang…the worst new ground visited.