The quarter-finals haven’t yet set the competition alight after such a barn-storming group stage.  So far the games have gone to form and there was little chance that the final game would throw up a surprise.  Whilst our hearts may have wanted Costa Rica, the 66/1 outsiders, to progress, it would take a super human effort for them to outwit the Dutch.  They’ve been what has been good and bad in the tournament so far.  Good – the domination over world champions Spain and THAT goal by Van Persie and then the Bad – Robben falling over whenever someone coughs in Brazil.  Say it like it is – irrespective of how talented he may be, he is a cheat.  Cheats never prosper is the saying….try explaining that one to your kids when Robben takes home millions of pounds every year.

1. The Dutch Bench – Surely smartest bench of the World Cup?  Immaculately turned out in their blue jackets and orange ties.  Looking like secret service agents on a dress-down Friday. Two hours after they walked out onto the pitch they still looked as “smart as the Man from Burtons” as my Mum would say. There is no dignity in a pensioner wearing a tracksuit.

2. “Intriguing” – When any commentator says the game is intriguing then it is time to go and make a cup of tea.  Why don’t they simply say it is a shocker – it is what we are all saying and thinking.   And then when it is still goal less with 10 minutes to go it changes to a game with a “Grandstand finish”…what on earth does that mean?  To mean that just conjures up images of Frank Bough and his misdemeanours.  In fairness, he was spot on (Mowbray not Bough) – it was a Grandstand finish to the game in normal time. 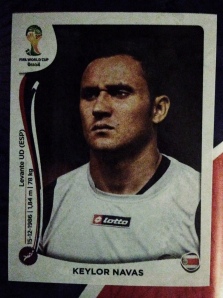 3. World Cup of keepers – The stars of the tournament so far have been the keepers.  Howard, Neuer, Ospina and Costa Rica’s Navas have all been outstanding. In fact every keeper could probably say they have performed on the world’s stage.  Well, Iker Casillas excepted.  Navas once again put in a fantastic shift, although probably felt that he would have had a busier two hours.  In fact for the first hour he could have sat in his goal and caught up on 24 without many problems.

4. Extra-time – Hard to believe that the final 15 minutes were being played by the same two teams that had contested the previous 105.  Absolutely top stuff – end to end, with the Costa Ricans suddenly realising that they could still win this game without penalties.

5. Tactical master stroke or balmy old cack – Van Gaal’s decision to bring on Tim Krul for Cillessen just to face penalties – it’s not a pre-season friendly or a testimonial is it? Is the Newcastle keeper that good? He’s no Paul Cooper is he?  Alan Shearer reminds us that he has only saved 2 penalties from 20 for Newcastle.  Is Cillessen hoping for a win or defeat whilst he sits on the bench? The result? Tactical Genius.

Still no luck in tracking down a Costa Rican number so we substituted in a Fuller’s Honey Dew to compete against a few Oranjebooms.

Netherland 1 Costa Rica 1 – Costa Rica win on penalties because Oranjeboom is actually brewed in Faversham and not Netherlands.