The title should read “Five things from the First Half of France v Honduras” as I am currently watching the game from the lounge in Gatwick waiting for a flight to the Middle East. Nothing much will happen in the second half, right?  No controversial incidents or commentating faux pas? But that does mean the Beer World Cup has been suspended once again, as despite the opulence of the Emirates lounge, they are rather lacking on beer, or any spirit at all from Honduras. Luxury airline? You are having a laugh! (Before I get downgraded, that last comment was a joke. Top service from top airline). 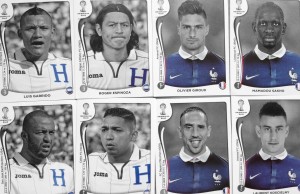 I have a funny feeling about France this year. Whenever they are hyped up they crash catastrophically, normally with massive collateral damage. But this time they have passed relatively un-noticed under the radar on their way to Brazil and now line up in a group that has been thrown wide open by Switzerland’s last gasp win over Ecuador. Honduras wont be a push over, as England found two weeks ago in Miami but the decision to not start with Giroud did seem strange.

Honduras liked up with the fantastically named “Costly” in their starting XI – how long before the commentator could slip in “that’ll be Costly for Honduras” ? 2 Minutes?

1. Bloody Tottenham – France became the millionth team in the World Cup to field a player who was either formerly with Spurs, or was still there now. Not sure whether this is a hallmark of quality or badge of shame? In this case, Hugo Lloris has earned his “spurs” this season.

2. Oops – Did someone forget the music? No national anthems were played in the stadium – conspiracy theories abound. Has the PA system broken (in which case isn’t that a bit of a safety issue?)? Someone stole the CD? The French players went on strike? At least it’s something to talk about at half-time if this game turns out to be the first dud of the tournament.

3. There’s no need for that! – sooner or later it was bound to happen – a team going postal, and that Central American temperament came to the fore in a feisty first period that eventually saw Palacios red carded. Surprised it took so long actually.

4. Studio experts….and Robbie Savage – Vieira and Henry. Two players who have won every honour at club and country level under the sun, respected by their peers and by fans globally. And then there’s Savage who did once win the Worthington Cup…guess whose voice is the loudest, trying to get their opinion over?

5. Big H – You can’t talk about Honduras without mentioning the big H on their shirts. Depending on the game it can either stand for Heroes, for qualifying for the World Cup, or horrible based on their mistimed tackles. No surprises what it stood for tonight.

With no Honduran-based alcohol in the lounge at Gatwick a decision was made that Magners had decided to become duel nationality and adopt it’s Honduran roots. In a tightly fought contest it earned a scrappy draw with Kronenburg 1664.