In 2013 we have so far managed to notch up visits to 31 new grounds in 7 countries, but some will remain firmly in our memories more than others.  The common theme here is that none of the best ones are “new builds”.  The ones that make your foot tap, your spine tingle and heart skip a beat are ones that ooze history.  The top three that we would heartily recommend for different reasons are:-

3rd Place – Sheffield FC – Coach and Horses Ground
The official Home of Football.  Every football fan should make a pilgrimage here to shake the club warmly by the hand for giving us the game we love today.  The ground isn’t actually in Sheffield – heck, it’s not even in Yorkshire but who cares when you have the best pub in the world (The Coach and Horses) next door which has 6 (SIX) Thornbridge beers on tap and some superb food.  You could spend hours scanning the “members” wall which includes such luminaries as Sepp Blatter, Jack Warner and Def Leppard.  The football is in someway secondary to a great afternoon out, thinking about what we would have been doing if Sheffield FC had given up on their dreams.

2nd Place – Arundel FC – Mill Road
Close your eyes and imagine the scene.  It’s mid-August, the sun is shining, you have your best shorts on and a free afternoon.  What else could you want?  A beer?  Well how about some local Arundel Gold Ale?  A backdrop to the game?  One of the most beautiful castles in England?  Oh, go on then.  Arundel’s Mill Road ground is simply picture postcard perfect.  It’s hard to concentrate on the game with such a backdrop and worth the admission alone.  Have I mentioned the beer? Ah ok. 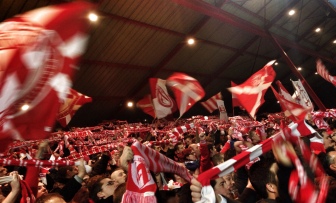 Once in a while you stumble on a ground that just leaves you wanting more.  The Guldensporenstadion doesn’t tick any boxes when you look at it on paper.  The club have been mid-table fodder in Belgium for years, the stadium has a modest capacity with little redevelopment in recent years. But come to the “Battle of the Golden Spurs” stadion on a big match day you will never want to go anywhere else.  It has the lot.  A huge covered terrace where the very vocal fans wave flags, twirl scarves and basically sing their hearts out.  A hulking old main stand that looked like it had been transported from Swindon Town.  Add in some of the best football food, top class Belgium beer and you cannot fail to fall in love with both KVK and the Guldensporenstadion.