Today, Lewes faced possibly their biggest test of the season. Yep, we said that before we travelled to Maidstone United in the pouring rain, and again when we faced the wrath of Wealdstone just 50 or so hours after a bruising encounter at Wingate a few weeks ago but on both occasions we came away with draws. But today we travelled to Dog Kennel Hill, in the Metropolis, to face Dulwich Hamlet.  The Ryman Pemier new boys have certainly adjusted to life quickly in the rarified heights of Step 3 of the Non-League Pyramid, scoring goals for fun and coming into this game in second place in the table.  Competition at the top is intense with no fewer than seven teams having held top spot so far this season and despite the Rooks unbeaten record since day one, they still sat outside the play-offs in 6th place, but just six points (with a game in hand) behind AFC Hornchurch in top stop.

This was a game that had a big red ring around it on the calendar.  Not only do I have a few Dulwich supporting friends who had been nervously trying to taunt me about the impending end of our record-breaking start,  but it was one of our rare away days that I could cycle to.  Could cycle ,I said, not was going to cycle.  Technically, I could cycle to any game but I was never going to get on by bike for the 60 mile trip down to Lewes, was I?  But Dulwich Hamlet, as the crow flies is just 8 miles from TBIR towers.  Being so close obviously meant an opportunity for a beer or two with the Lewes Lunatic Fringe as well as such noble gentlemen as The Real FA Cup team, who just happened to be not only Hamlet fans, but sponsors of their captain Ellis Green.

Back in the day, when I was a few pounds lighter, I often played on the old Dog Kennel Hill ground, which in its day was a fine old-fashioned stadium holding over 20,000.  In fact, it could claim the honour of being one of a small elite of grounds that has hosted Olympic football in this country (alongside Old Trafford, Wembley, Ilford and of course Walthamstow), back in 1948 when over 23,000 saw South Korea beat Mexico.  One of my greatest moments came when I scored here from the half-way line for Fleetdown United versus Dulwich Vista, spotting the keeper off his line and BOOSH…1-0!  Alas, my performance in that game would be best remembered by the dozen or so spectators for taking the ball around the keeper before deciding to smash the ball as hard as I could at the empty net from 8 yards, only to see the ball hit both posts and rebound back to the keeper in a move since copied by Liverpool’s Ronnie Rosenthal against Aston Villa a while back.

Today, the turf I graced is under the cold meat counter in Sainsburys.  Back in the 1990’s, the club having fallen on hard times sold the land to the supermarket giant and built a modest ground next door.  The access road, Edgar Kail Way, was named after the club’s most famous player, who was capped by England whilst still an amateur player during the club’s golden period that saw them win the Amateur Cup three times at Upton Park.  But the spirit of the club has never been stronger.  Their support, both home and away gives them a real advantage but had they yet met their match in the form of the LLF – The Lewes Lunatic Fringe. 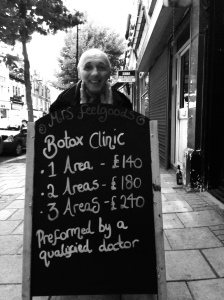 Many have tried to infiltrate the LLF, trying to understand the psychology of the group, but have failed.  To know them you have to be one of them, something I have learnt through years of running alongside them.  Today, I am welcomed into their bosom but it was not always the case. I stood on and watched the carnage in a pub in Dorchester when Terry found out his ploughman’s lunch didn’t have a pork pie in, or the lunacy of failing to buy a bottle opener before the long trip home from Lowestoft Town.  The Dulwich game would be a real test.  The plan was a 12pm rendezvous in Millwall territory, platform 9 at London Bridge where we would aim to give the authorities the slip. Quick train ride down to East Dulwich before we entered the Actress, did unspeakable deeds to The Bishop before larging it with not one, but two different flavours of crisps in the East Dulwich Tavern – right under the noses of the Hamlet fans, armed with footballing trivia, real ale guide vouchers and potentially Cynical Dave’s concealed humus.  People still question why we do it.  Well, it’s the buzz ‘init.

Dulwich Hamlet 4 Lewes 2 – Champion Hill – Saturday 5th October 2013
The run had to end at some point and there was no shame in it being against Dulwich in a very pleasing on the eye encounter.  The toll of injuries, suspensions and a rampant Hamlet side was the undoing at last of the Rooks who probably put in one of their best performances of the season so far but came up short in terms of attacking intent.  The absence of the centre-forwards Nathan Crabb and Ade Olorunda, plus the enforced withdrawal just after half time of Jack Walder put the Rooks on a backfoot that against other teams they would have been able to cope with but today the home side were simply too strong.

After a very enjoyable pre-match warm up around the pubs of East Dulwich we had hardly taken our places behind the goal when a superb cross from the right was turned into his own net by Steve Brinkhurst to give the home side the lead. “That’s his pocket money gone for this week!” said his Dad next to us.  But then Lewes kicked into gear and it is fair to say that they dominated the rest of the half. just lacking the finish to the possession which Crabb or Olorunda would have given us.  But on 35 minutes we got our equaliser when Jay Lovett pounced on a loose ball in the area after Dulwich had failed to clear a Ross Treleaven “Delap-style” throw in.

The second half was barely a minute old when Dulwich had the ball in the net, but it was ruled out for offside. Oh how we laughed at their premature celebrations for all of 30 seconds before Jerome Walker scored for real.  Two became three just before the hour mark when Kevin James scored which seemed to wake up the Rooks and Jack Dixon’s screamer from 25 yards 90 seconds later brought Lewes right back into the game.

For fifteen minutes it seemed that Lewes may get something out of the game.  If Dan Smith would have been wearing stilts then he would have had a simple tap in at the far post from Matt Crabb’s cross but alas such items are still banned by FIFA and it turned out the next goal won the game, scored by dangerman Marc-Anthony Okoye, the player I had highlighted as a major concern for Lewes when I scouted Dulwich a few weeks ago.

At the final whistle there were no complaints from the fans or the management team alike.  It had been a great game of football and we came up short, simple as that. Dulwich had simply been too strong over the 90 minutes and the win kept them in seventh place.  News came through that Wealdstone, the league’s only other unbeaten side, had lost to Margate so we will claim we had the longest unbeaten run in the league, albeit by a few seconds.

It would have been rude not to finish off an excellent away day with a beer and around these parts you don’t have to wander too far to find a pub.  The LLF were in a philosophical mood, contemplating the biggest game of the season next weekend when Sutton United, third in the Conference South, would be visiting in the FA Cup.  As Hamlet himself once said, “Though this be madness, yet there is method in’t.”