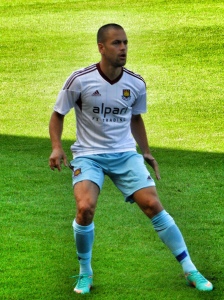 How much is too much to watch a football game?  I know people who have paid hundreds of pounds to watch Cup Finals and World Cup matches, but would you pay four times the average ticket price just to watch a friendly?  This was certainly the question being asked on the South Coast a few weeks ago when AFC Bournemouth shocked the footballing world by announcing they had secured a friendly against the mighty Real Madrid.  Shock soon turned to disbelief when it was announced tickets would cost £60 for General Admission.  £60 to watch a friendly???  Even Chelsea wouldn’t have the cheek to charge this!

But it seems the Cherries had done their Economics homework in terms of supply and demand as this week the final tickets went on sale and were snapped up within hours.  Every one of the 10,783 tickets had been sold.  Instead of running out against Woking next weekend, Eddie Howe’s first XI will be lining up against Ronaldo and Kaka at Dean Court whilst the Directors will be counting their £600-odd thousand pounds of takings.  Who has egg on their face now?

But first up they had a small matter of a visit from West Ham.  I’m sure if tickets for this game were £60 each then it too would have been a sell out, but a £10 price tag obviously put your discerning Hammers fan off who only buy high price tag items now such as Andy Carroll and the Olympic Stadium.  But I wasn’t complaining.  After all I was getting a chance to take the Fuller family to the English sea-side as well as see the game.

Football fever has gripped Bournemouth ever since they won promotion back in April.  In one short season they would be going from taking a few dozen to Hartlepool United and Tranmere Rovers, to welcoming the likes of FA Cup holders Wigan Athletic, Reading and Leeds United.  And of course there would be the return of Bournemouth’s favourite loveable East End rogue, ‘Appy ‘Arry as he brings his QPR team down the A27, stopping off no doubt for tea and biscuits at one of his Sandbanks residences. 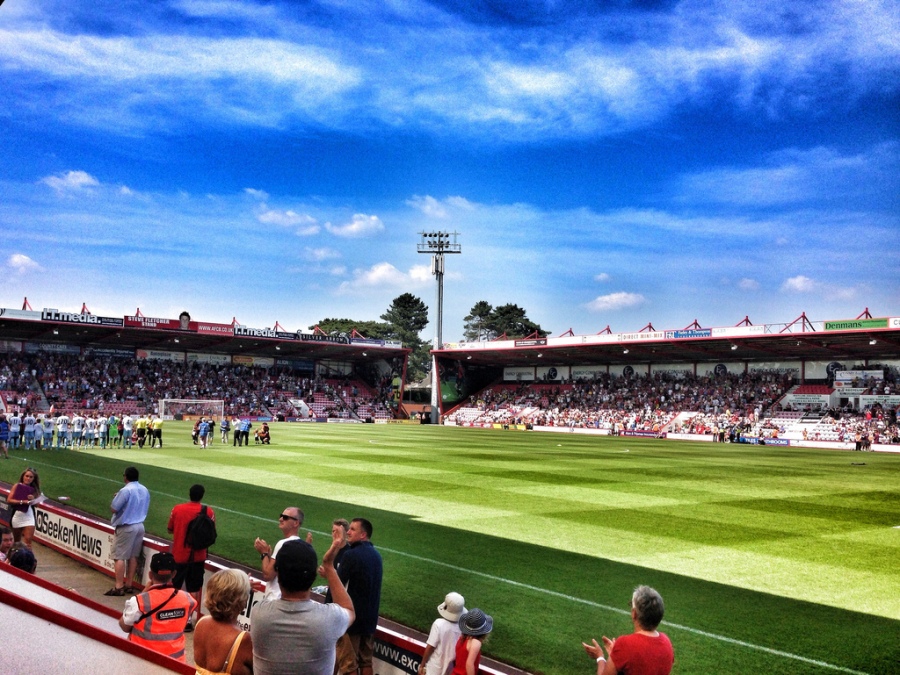 Of course, we wish the Cherries all the best.  It is a huge step up to the Championship, but teams like Watford and Blackpool have proved that smaller clubs can not only hold their head above water but can also challenge to go higher.  Football needs more stories of David’s overcoming Goliath’s like Bournemouth and fellow promotees Yeovil Town.  So it was with some irony that the game against the 10th best team in the richest league in the world (according to Premier League positions in 2012/13 anyway) would be merely a warm up for the big one against Real Madrid next week.

The friendly was actually arranged as a testimonial for Stephen Purches, a 270 game veteran for the Cherries, who had started his career at the Hammers back in 1998. Unable to break into a side featuring such world-class talent as Javiar Margas (only £1.8m for 6 games), Scott Minto and Neil Ruddock under ‘Appy ‘Arry, Purches left for the South Coast in 2000 without once pulling on a first team shirt.  Thirteen years on and the cheeky chappy was still spending other people’s money like crazy on foreign players no one has every really heard of (Redknapp not Purches of course!). 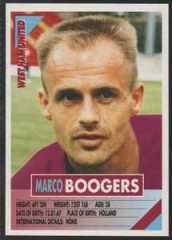 The last time I was down here was over ten years ago, when Lolly was just an annoying two-year old.  I’d taken her out for the day, did the whole beach thing, fed her ice cream and sweets to keep her quiet.  Alas, come 3pm she had probably overdone it and proceeded to throw up over the chap in the seat in front in the East Stand, ten minutes into the game versus Brentford.  We didn’t stay much longer after that.  But she was willing to give Dean Court another go, and after a day in the beautiful English sunshine, we headed along to the ground.  Prior to that it had been to see ‘Appy ‘Arry’s Hammers take on the Cherries at the old Dean Court, the one that was 90 degrees around the other way and falling apart at the seams.  I think it ended 2-2 but what I do remember was a fantastic performance from a new centre-forward we had just signed.  Apparently ‘Arry had signed him after seeing a video of his goals for Sparta Rotterdam and splashed a cool million on him.  The name?  Why Marco Boogers of course! Later voted by the Times as one of the 50 worst Premier League players ever.  ‘Arry of course wasn’t having any of the blame, and blamed it on Betamax, of course.

The plan of action on the hottest day of the year was to be a morning on the beach at Boscombe, football and then fish and chips on the pier.  Alas, the traffic on the M25, M3, A27 and A338 put pay to that as our family day out and the normal 2 hour journey creeped over 4 hours as we pulled up in the brand spanking new Kings Park car park.  Dean Court, Kings Park, Goldsands Stadium, whatever name is the flavour of the day is finally getting a fourth stand, although it may be touch and go whether it is ready for the first game in the Championship against Charlton Athletic, thus meaning Oxford United will be the only three-sided ground in the Football League.

So will little time for the beach we did the next best thing.  We went into the club shop to buy some football socks and then into the ice-cold “Legends” Bistro and bar for a cold pint of beer.  None of your local guest beers available here, Seagulls fans.  Oh, no.  Who wants a taste of a local brew when you can have a Carling, John Smiths or a Guinness!

Even the most Allardyce-allergic Hammers fan couldn’t find fault with a professional performance against Bournemouth.  The game, played in wilting head wasn’t a classic, but was executed by West Ham with two first half goals, scored by midfielders Nolan and Collison.  Herein lies the main issue facing West Ham, again, this season – the simple lack of a threat up front without Andy Carroll in the side.  It wasn’t that they didn’t deserve the win, it was just they didn’t really create any chances.  West Ham started with Maiga up front, and Vaz Te just behind but it was the ever reliable Kevin Nolan who “ghosted” into the box to head home Guy Demel’s cross in the 7th minute.  Commentator’s love that phrase, “ghosting” but really it just means poor defending, doesn’t it?

Whilst Collison skipped around the last defender and rolled the ball into an empty net, just out of the keeper’s grasp before half time, it was Cherry Bear who was the star of the first half.  Despite the pitchside mercury hitting the mid-30’s, he stood in the corner of the pitch, cheering on Bournemouth.  I would imagine it might have been a bit “sweaty” in there.

The second half saw the usual mass substitutions.  West Ham brought on the lesser-seen Joe Cole, and the even rarer sight on a football pitch rather than a night club, Ravel Morrison.  I can honestly say I have never seen the lad play, reading more about his off the field antics than on the field.  Again, an obviously talented player, but far too easily led astray.  If Sir Alex couldn’t tame him, then what hope is there for anyone else.  Another man hoping to impress was the giant of a centre-midfielder, Orlando Engelaar who looked a decent player.  Perhaps the only surprise was that new Spanish keeper Adrian wasn’t given a run out.

The final fifteen minutes saw Purches come on for his moment in the sun, roundly applauded by the 7,030 crowd.  In the current age of football such one-club loyalty is rare, although it has to be said, the players today hold more of the power than the clubs do thanks to the Bosman ruling. A swift get away on the final whistle saw us on the beach at Boscumbe just as Darren Anderton pulled on a Bournemouth shirt for the last time, and even managed the final 6 minutes without injuring himself. 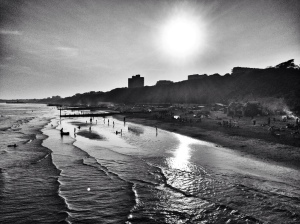 Despite being 5pm it was rammed, and soon the bar on the promenade was full of West Ham fans.  Good natured versions of Bubbles soon gave way to a few less family-friendly numbers and the bar stopped serving for a short while.

It was a perfect ending to a good day out, doing what England does best.  Traffic jams, crap tattoos, women squeezed in bikini’s 3 sizes too small, fish and chips and a stunning sunset.  Oh, and a good away win.