Many non-league football fans dream of a situation like this: a Wall Street millionaire plucking their club from obscurity and securing their financial future for years to come. 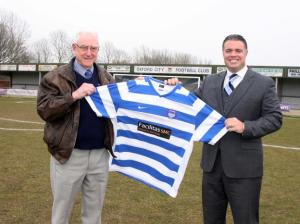 It seems pretty unlikely but that is exactly what has happened to Conference North outfit, Oxford City, who are now owned by Flordia businessman, Thomas Anthony Guerriero.

Given that even the most ardent football fan would struggle to name the second team in Oxford (no offence City fans) the acquisition of the club may have got a few City supporters excited but also a bit nervous.

Football fans in the city might get a sense of déjà vu reading about Guerriero’s arrival. ‘Wealthy businessman promises moon on a stick to football club’ has played out in the town once before.

On that occasion, Fiorz Kassam took Oxford United to the cleaners with the sale of their old stadium, the Manor Ground, before charging them a fortune to play at the ground he named after himself, the Kassam Stadium.

Given the prime retail estate Oxford City’s Court Place Farm-base occupies, City fans would do well to heed the lessons history has taught us, before getting carried away with thinking they will be the next favourite in the football betting odds online before too long.

It isn’t just United’s plight which should serve as a warning to City, just look at the current problems at Blackburn and Hearts, both owned by people who seem to know little about running a football club.

Of course, there are some good stories about mega-rich folk investing in a club, and as such Guerriero should be given a chance to prove himself before he is tarred with the same brush as Venkys and co.

While City’s managing director, Colin Taylor, says Guerriero will not be a sugar daddy to the club, he has funded the recent acquisitions of seven new players, while allowing manager, Mike Ford, to retain all but one of the players who finished 10th in the Conference North last season.

The investment in the team will put Ford under a bit of pressure and the minimum expectation this season will be at least a play-off spot for City.

The ultimate aim will be to overtake local rivals, Oxford United, and eclipse the levels of fame they achieved when World Cup winner, Bobby Moore, took over in 1979. That will be the dream for City fans, with the nightmare being another resignation from senior football.