This week has been painful for us Lewes fans. Our league position and survival hopes were in the hands of others as all of our relegation rivals played, some twice, between Tuesday and Thursday. There, of course, was an ideal sequence of events, but that was never going to happen. The form book was also a guide to how the results went, but once again, that went out of window.

Twitter is a great invention for us football fans as we can get up to the second score updates, but only if people are there and able to relay events first hand. Tuesday night’s game between Cray Wanderers and East Thurrock United was watched by around 150 brave souls, yet it appeared no one thought of sending updates on the score, least of all the two clubs involved. The Nonleaguelive website is fantastic but can sometimes lead you astray as it automatically assumes a game is 0-0 unless it gets updates. So whilst we were happy to see the game still at stalemate at half time, there had in fact been two goals. For those who remember the good ol’ days of watching a vital game unfold on Ceefax, this was just as painful.

On Tuesday night Hastings United finished their game at Hendon with 8 men, after 3 were sent off. On Thursday Thurrock ended with 9 against Lowestoft Town, yet for some bizarre reason neither team will be penalised in the final games of the season with suspensions as the cut off point for this season has already passed. The odds on those five still being at their respective clubs next season is slim so what message is that sending out? Perhaps the clubs will be asked to explain their actions to the Ryman League, but what will that achieve?  In the Premier League, or Football League, suspensions kick in almost immediately. Why can’t non leagues adopt the same model? Doesn’t this send out a message that foul play is acceptable at the end of the season?  Another ridiculous non league rule that needs to be revised, although I am sure they are simply too busy planning their end of season gala dinner (which, by the way EVERY club has to buy at least four tickets for…that’s fair, right?).

Not that Lewes can moan about the situation we find ourselves in. Teams at the bottom of the league are not there because of bad luck. At the end of the season we could easily lay claim to awful decisions in the games versus Hastings United and Kingstonian that should’ve given us five more points (ironically both officiated by the same referee) but so can a dozen other clubs. Teams are never “too good” to go down. The simple act is this season Lewes haven’t yet made the top half of the table, the highest league position being 12th. Too many draws in the first half of the season, too many defeats in the second half have meant we are fighting a relegation battle rather than a play-off one as we expected at the start of the season. Clubs with smaller budges than us are challenging for the play-offs such as Metropolitan Police, Hendon, East Thurrock United and Concord Rangers. These clubs survive on crowds a faction of what we see at The Dripping Pan every other week. 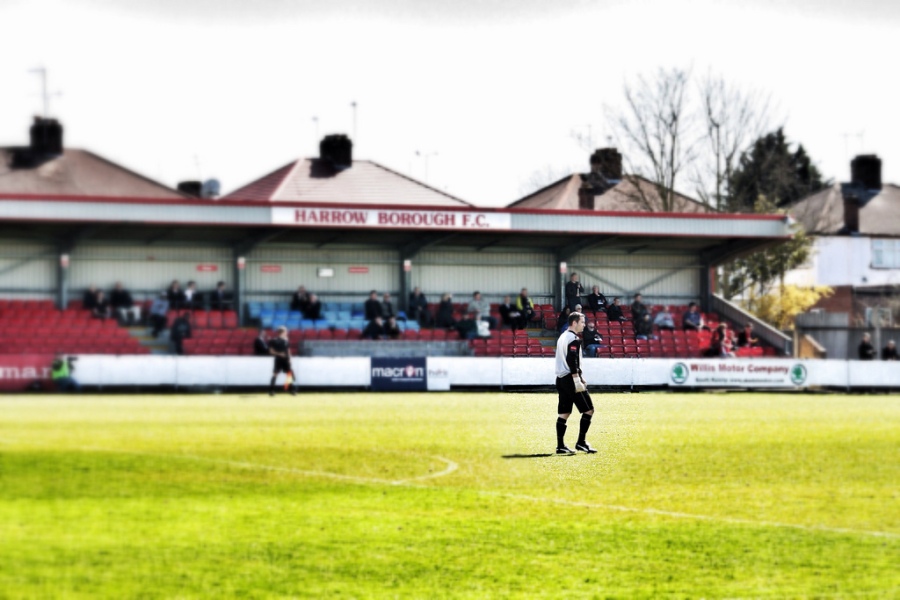 Three games left then. Eight days to save a season. All three are winnable, but we’ve been here before this season. A trip to Dave Anderson’s Harrow Borough could’ve just as easily been a trip to Stamford Bridge, but with a but more atmosphere. Boro’ are far from safe themselves. The results this week had simply pulled them back into the mix, sitting just five points above Lewes in the relegation zone. A win and they would be safe. Defeat and derby games versus Cheshunt next season could be on the cards.

Earlsmead is the palatial home of Harrow Borough since 1934. It is one of the only grounds in England that still has the bomb shelters erected during World War Two. The roof of the ex-Anderson shelter, named after their current manager, Dave, is still visible in the corner of the ground.

With survival at stake, the Lewes Lunatic Fringe met up under the watchful eye of the police at Marylebone. Some cynics would suggest they were there to marshall the Stoke fans arriving for the game at QPR, but we knew better. Big Deaksy, Cynical Dave, Terry Boyle…heck even Patrick Marber had dusted down the Fila for this one. If we were to go down, we’d go down fighting, just like they say on Green Street or Football Factory, but with a few more Greene King London Glory Ales inside us.  The Lewes Express was running fast to Premier League survival, with one stop on the way at Wembley Stadium (railway station).

Harrow Borough 0 Lewes 2 – Earlsmead – Saturday 20th April 2013
This was one of these day which restores your love in the beautiful game.  The sun was shining, the beer was flowing, the company was top notch and we won three points.  Whilst the mood on the way up on the Survival Express was one of uneasy hopefulness, full of “what if’s”, on the way back it was exhausted relief.  It hadn’t been a great game but for the first time in a few weeks we looked tight at the back, organised in midfield and offered a threat up front.

Perhaps it was the very real threat of relegation, or the return from a four month injury lay-off of centre-back and club captain Steve Robinson.  But at the end of the day three points are three points.  Add in some favourable results around us and the win tipped the Rooks from relegation probables to possibles……and with a game against fellow relegation battlers Cray Wanderers to come in just three days time, survival was back in our hands.

The away support was once again fantastic, supplemented by the non playing members of the Lewes squad.  The word “team” has never been stronger than for this must win game.  The sunshine was certainly very welcome, but we would have easily swapped the clement weather for three points any day.  In truth it wasn’t the best of games.  In fact the official twitter account of the home side tweeted in the first half “this is the worst half of football we have seen this season”.  With the game ticking down to half time, and with neither keeper being tested, we were looking forward to some half time hospitality in the boardroom.

But then a hopeful punt in the air saw the Harrow centre-back and keeper hesitate and Nathan Crabb sneak in between and place a perfect lob over their heads and into the corner of the net.  The ball “nestled” in the corner of the net.  Possibly the best word in football.  Nestled.  We all took a second to look at the ball in the net, nestling, before we broke into celebration.  Not only did we look solid, we were now winning.  And the sun was still shining.

The second half saw us spending far too long looking at the scores from elsewhere on our phones, nervously remembering other one goal leads we had thrown away in the past.  But then came the defining moment in the game.  Godfrey chased the ball to the touchline, fell over with a defender who then proceeded to lay on the ball.  Despite our protests and the fact the incident happened no more than five yards away, the linesman gave nothing.  Fortunately, the referee some thirty yards away saw the offence and awarded a free kick.  Harry Harding delivered the free-kick to the far post, Nathan Crabb got his head to it and it appeared to be bundled home by a combination of Ben Godfrey and a defender.  Two nil, time for a little smile.

The last period of the game saw a few nervous moments at the far end, but Lewes looked more solid than we have seen in previous weeks and the final whistle led to a huge sigh of relief.  Cheap Polish lagers and a packet of onion rings were our celebratory treat for the way home and as we passed Wembley we raised a can.  We may not ever get this close to the national stadium, but it looked like we would still be a Premier League side for another season.  Away days don’t get much better than this.