Whilst looking for inspiration for the legendary matchday poster (see the gallery here), Lewes FC Marketing Director Charlie Dobres happened upon the amazing fact that on January 19th 1968, Lewes Town Hall hosted a remarkable Pink Floyd Gig. And not only that, the gig was promoted by the football club itself or at least by one very special supporter.  The club planned to celebrate the 45th anniversary of this concert in conjunction with the game today against Margate, but the wintery weather put pay to the celebration. 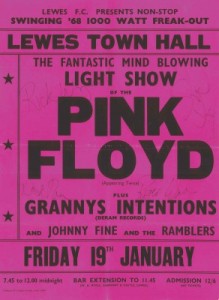 In the mid sixties, Lewes football club was hitting one of its growth spurts. Up until then, Lewes had only a solitary Sussex RUR Cup win to their name – the trophy contested by County League teams. However, further RUR Cup wins in 1962 and 1963 lead to a breakthrough season in 1965. That year the Rooks not only won the County League title for the first time (and promotion to the Athenian League), but also won both the RUR and Sussex Senior Cups – the treble.

Further success came in winning the Athenian League 2 title in 1968, and then promotion to the Premier Division just two years later. Lewes FC was on the up but success meant doing some serious renovation to the old ground.

It was clear that for the club to progress much further, the Dripping Pan was going to need floodlights for the first time ever. But how? With gates that rarely went over one hundred, the funds were simply not there and Tom Carr, the then Chairman (and local farmer) was not going to supply the funds.