League Two in the past few months seems to have gone through a bit of an image change. We’ve had Luis Boa Morte sign for Chesterfield, a former double winner with Arsenal. James Beattie, once a £6 million player who counts Everton and Rangers among his former clubs, is now at Accrington Stanley.

Three weeks ago, we had the pleasure of seeing the former Rangers midfielder Barry Ferguson control the midfield when Fleetwood came to town. It’s scary to think that it could have been Joey Barton, who decided to swap the north-west for the south of France and Olympique Marseille. Their central midfield could have been even better if the two had been in the same team.

Ferguson though was excellent on the day. Ok, so no-one on the day impressed with their “Movember” efforts, but facial hair aside, he was clearly a step above everyone else on the pitch that day.

In League Two, a decent central midfield player is absolutely vital, and if you can attract someone of that calibre, then you stand half a chance of doing well. Once the players around them catch on, then you can have a very good year, as Fleetwood are doing at the moment. When we got into the League, the signing of Peter Gain was a big factor in our staying up. While Gain may not be on the same level of Ferguson or Davids, he played a huge part in us retaining our league status, and then going on to bigger and better things. There have been occasions this year when it appears that we have missed his influence, but that is diminishing as the season progresses.

Of course, the biggest signing by a League Two club this season was indoubtedly made by Barnet. It’s strange to think that Edgar Davids, one of the more influential midfielders of the past fifteen years, and a player who has played for some of the biggest clubs in Europe, as well as made over seventy appearances for the Dutch national team, is here and in League Two.

The appearance of players that have spent so much of their careers at a higher level in League Two just all seems a bit mad, given that the normal perception of this division is that it is full of players who haven’t quite made it at a higher level, and have found a living in the lower reaches of the league. Years ago, players would drop down the leagues, possibly to keep playing and in hope of delaying the inevitable march of time and their retirement, and also to have one last payday. Then there was a lull, but now they are flooding back. And now that David Beckham is leaving Los Angeles Galaxy, perhaps he may, just may, end up at Victoria Road.

It’s been a while since my last Daggers game, with the last being that stoppage time win over Fleetwood. Since then, I’ve sampled the delights of Barcelona (and a 5-1 win over Athletic Bilbao), a mid-week trip to a very silent Lille, and then last Saturday, to Crystal Palace. In that time, we’ve lost at Torquay while I was in Spain, and then registered a win at Bristol Rovers while Dagenham Dan and I were freezing ourselves in South London, watching Palace and Blackpool play out an entertaining 2-2 draw. 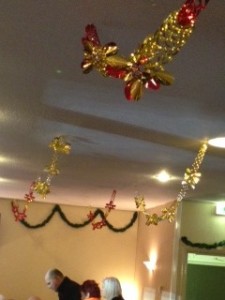 There is an early half chance for each side, but mostly the play is a bit on the messy side. Barnet are being commanded from the middle of the park by Davids. It’s reminiscent of when Deitmar Harmann ruled the midfield for M.K Dons against us in league one a few years ago. So impressive was his performance that day that he was probably directing the whole of the county, let alone that one game.

The rest of the team though are not on the same wavelength at times, and there is more than one occasion when he is telling the rest of the team where they should be putting the ball, gesticulating and shouting at his fellow Bees. Someone wonders if he is doing a put on London accent, in the style of Steve McLaren in Holland.

The only goal of the half arrives after seventeen minutes. Elito is able to get the ball into the centre, where Sam Williams is waiting on the edge of the area. He lays the ball off to an onrushing Matt Saunders, whose first time shot flies past Stack and into the net.

Barnet offer very little by way of an attacking threat in the half, whereas at least we look like providing some kind of problem for the opposition defence.

There is another close call for the visitors as a Sam Williams volley hits the crossbar, and the half ends with the Daggers leading 1-0, and although I may be slightly biased, it is deserved.

There are the usual presentations at the interval, while the queue for the burger bar behind us doesn’t seem to get any shorter as the second half beckons. I’m starting to wonder if they are being served, walking round the back of the stand and joining the back of the line.

The only other thing to hold our attention at the interval (aside from the performance of Davids) is the age of our team. While the experience of the Barnet captain is well known, we try to work out who our oldest player is. As the players start to wonder back out, we reckon it is twenty five, with most a few years younger than that. Given the form we are in at the moment, this bodes well for the future, but of more immediate concern is the second half. We just hope that one goal is going to be enough.

The second half starts with the Daggers attacking the sparsely populated away stand. The half is engaging enough without being of the really entertaining nature that we were hoping for. We look in enough control to see the game out at 1-0, but with about fifteen minutes to go, we start to play very defensive leaving just one player up front, and now Barnet start to offer a threat. There are a couple of occasions where a goal for the visitors looks imminent, but somehow the ball doesn’t end up in the net. Based on the game overall though, the result is probably about right.

Referees normally attract the ire of at least one set of supporters, and today it is no exception. Today’s pantomime villain is Mark Brown, who manages to infuriate the home support with some (from our point if view) lenient decisions. The first card is finally produced with eight minutes to go (the ironic cheer is probably the second loudest of the day, after the goal), although they could have come a lot earlier. Perhaps he had forgotten they were in his pocket.

The three minutes of added time are seen off, and most of the crowd leave the ground happy with another win, one that will are us move into the top half of the table, just a few points off of a play off place. There is an appreciative round of applause for our former forward Jon Nurse at the end of the game, before the team do their usual warm down lap.

The bar is still busy an hour after the end of the game, although given that most will not see each other, it’s not a surprise. Next weeks trip to Morecambe is in doubt, which is down to a lack of people willing to travel, rather than the weather. Given that it will be the last Saturday before Christmas, I suppose that it is only to be expected. We do have a back up plan, but to be honest, I would sooner be setting the alarm for 4am, than going anywhere else.