New Year’s Day was supposed to be a day of celebration.  Since the fixtures were released back in July we had been looking forward at welcoming Maidstone United at The Dripping Pan today.  With an expected four figure crowd, a special bumper edition matchday programme written and enough organic burgers to feed at least a dozen people we were ready to put on a show.  On Saturday our pitch team battled against the elements to get our game versus East Thurrock United on and we all did a collective sigh of relief when the final whistle blew and over 650 fans applauded the efforts of those who had not only performed but had got the game on. 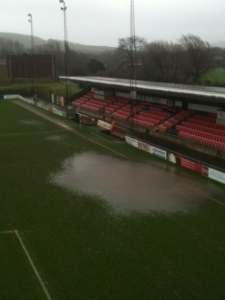 Alas, the forecast for the days before the New Year was poor, and so it was.  We put “Pitch Watch” in place via Twitter, with images of the ground posted regularly to give us all hope.  Alas, the torrential rain on New Year’s Eve meant that the standing water on the pitch wasn’t to the referees liking and with a very heavy heart our game was cancelled.  The cost to us?  Thousands of pounds.  Instead of welcoming a crowd of 1,200, we will be lucky to get 400 when the game is squeezed into a midweek slot in February.  Gate receipts will be down by £8,000.  Programme sales down.  Catering down. Bar takings down.  Yet our costs don’t change.  Players still need to be paid this week, utilities have to be paid, printers still want their invoices paying.

We weren’t alone.  In fact every game in the Isthmian Premier fell by the wayside, and only one game in the Conference South made it to 3pm.  But with a “free game pass” I had little options as to where to go.

I was literally driving around Essex and Cambridgeshire looking for a game to go to as my options reduced.  I had one last chance.  Dagenham & Redbridge.  Despite the appalling weather, it looked like the game at Victoria Road, or the London Borough of Barking and Dagenham Stadium to give it its catchy shorter name was on, so headed down the A13 to meet up with the Daggers Diary team for the first game of what promises to be a great year of football. END_OF_DOCUMENT_TOKEN_TO_BE_REPLACED

The Daggers Diary team take the long road up to Morecambe to see whether their promising start to the season could continue.

Last weekend’s win over Bristol Rovers at Victoria Road was a first win in five league games for us. Granted, there had been three 1-1 draws in that run, but also a 3-0 defeat at Mansfield which was described as “not the best day out we’ve ever had” by those that attended. The defeat at the Conference champions was swiftly followed by a home tie in the JPT against Colchester.

Going one down just before half time had us facing up to another early exit from a cup competition, but a second half recovery, aided by a much better performance and a red card for former Dagger Magnus Okuonghae produced four goals without reply to earn a second round trip to Southend United.

Exeter City then provided tougher opposition a few days later. While the performance was good, the wasting of so many chances when we were on top meant that we never capitalised on our one goal lead, and in the end, were grateful to hang on to a point, as the visitors scored their first away goal of the season, and threatened to follow it up with a second.

It was a similar story last Saturday against Rovers. Once again, we scored first, and were playing quite well, but gradually it levelled out and soon we were under the cosh. When Brian Saah was penalised for handball inside the area, the feeling of deja-vu was the overriding emotion as the ball was placed on the spot. Matt Harold’s spot kick though was well saved by Chris Lewington, and despite a few more nervy moments, the game was settled by a second Daggers goal to produce that first win since York City visited in mid-August. 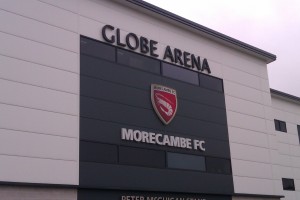 The new style of play is winning a few people round, although this is certainly not being reflected in attendances. For the last few years, we could take some small comfort in the fact that we were at least getting more people than Accrington. Last week’s gate of 1,423 was the lowest for some time, but follows a trend that started last season. In a week when Leyton Orient’s request for a review of the decision to allow West Ham to take up tenancy in the Olympic Stadium was refused (and with it, the possibility of cheap tickets flooding the area), it’s slightly worrying to see so many empty gaps appearing at home games. There are some deals on to get more people into places like the Boleyn Ground at the moment (the league cup tie on Tuesday against Cardiff is £15 for anywhere in the ground), but will this take floating fans away from clubs like ourselves and Orient? Mostly, ourselves and Orient are at home when West Ham are away, so it could be argued that they are not denying either of us supporters. However, I would suggest that perhaps the pricing structure at the lower level is turning people away. END_OF_DOCUMENT_TOKEN_TO_BE_REPLACED

“Fancy a match report?” Steve Wilson asked me at Dagenham Dan’s wedding recently.  Thinking it would be from your run of the mill European game in Spain, Germany or Italy (nothing wrong with these mind) I of course agreed, but wondered where I could find a home for it.  “Sure.  Where you off to?…”Oh, I am running a marathon in the Faroe Islands and there is THE big derby the next day”.  Steve had me at Faroe Islands, as I am sure he would have in your case. 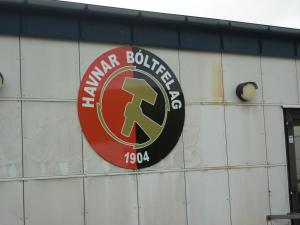 The Faroe Islands have been traditional minnows ever since their admission into FIFA in 1988 and UEFA in 1990. Their results would back up this standing, having a record of P152 W18 D15 L119 of their officially recognised fixtures to date (including friendlies), a record not dissimilar to Lewes’s in recent years although I was mildly surprised they had won so many games. However, even the Faroes have had their moments in the headlines for the right reasons – their very first competitive fixture was a Euro 92 qualifier against Austria, which they won 1-0, to the surprise of everybody. Indeed, in the December 1992 FIFA World Rankings, the Faroe Islands peaked inside the top 100 for the only time, attaining a ranking of 94th.

More recently the Faroes have been justifying their minnow status, and at the time of writing sit in 175th in the FIFA Rankings, below such powerhouses as Pakistan, Sao Tome e Principe and Bermuda. The aforementioned victory against Austria, whilst being a home fixture for the Faroe Islands, was actually played in Landskrona, Sweden since there were no suitable pitches on the Islands at the time. Nowadays home fixtures are played at Tórsvøllur, a small 6,000 capacity stadium situated in a sports complex on the edge of the capital city – Tórshavn. END_OF_DOCUMENT_TOKEN_TO_BE_REPLACED

On a day when the rain didn’t stop falling, the storm clouds kept away from Dagenham & Redbridge for a couple of hours, reports the Dagenham Diary team.

The Daggers had been reasonably active in the transfer market over the summer. Not on the scale of £90+ million for one player, but there had definitely been a reasonable turnover of the playing staff. Gone were the older, more experienced (but also some would argue, more injury prone) players, and in came some that we had heard of, but like always, bought in on a small budget. While we may have got some cash as a result of a sell on clause for Dwight Gayle’s transfer from Peterborough to Cystal Palace, all those who have been watching the club for any length of time weren’t expecting much to be spent on the team.

Brian Saah has been excellent at centre back so far, and is forming a very good partnership already with the almost always reliable Scott Doe. Getting a central defender was important, especially as Like Wilkinson continues to struggle with injury. After a very good year last time out, Wilko will have to go some to get back in the team. Competition though is definitely a good thing, and to have three decent central defenders going for two places should mean that they will be kept on their toes.Similarly, up front, the signing of Rhys Murphy has been a good move so far. Taking the number of ex-Arsenal academy players in the squad to three, Murphy has settled in very well, scoring twice already. The front three (Murphy, Brian Woodall and Josh Scott) have been excellent in the games that I have seen, and as mentioned previously, this is a make or break year for the last two. So far, things have gone well. END_OF_DOCUMENT_TOKEN_TO_BE_REPLACED

Whitstable, home of England’s biggest village green (despite the fact it is a town), Alan Davies and TV’s worst comedian, Harry Hill.  Twinned with Mölndal in Sweden and “just good friends” with Sisimuit in Greenland.  And the final venue for my 2012/13 football season.  Yes, you may say it is nearer to the start of next season than the end of the last, but I play by the official rules.  UEFA told me over a coffee a few weeks ago (not all of UEFA but someone who works there) that the season ends on the 30th June each year, and so despite not seeing a game for over 4 weeks, today I bow out of the 2012/13 season having seen a grand total of 93 games.  Not quite the high of 2011/12’s 105 games, but even still – pretty bloody impressive if you ask me (which of course you are). 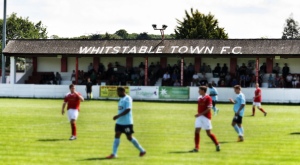 We all dream of fixtures falling into place for the Best.Day.Ever and here we are at the end/start of the season with a double-header of Ryman League South v Football League teams, separated by just a few miles, or one stop on the train.  Alas the lack of match action in the past few weeks has driven us to the extreme.  I wasn’t the only one who had seriously looked at the World Stool Ball this weekend before I stumbled across Dagenham and Redbridge’s visit to the Kent seaside.  As 80/1 outsiders for the nPower League Two title next/this season with Betfair.com, Dagenham & Redbridge will hope for a season similar to the start of next season rather than the end where they were in freefall. Add into the mix Gillingham’s first run out of the season at Faversham Town and it was a day better than hospitality at the FA Cup Final, or a free ticket for the All-German Champions League Final.  Probably. END_OF_DOCUMENT_TOKEN_TO_BE_REPLACED

The Ball is Round
Blog at WordPress.com.