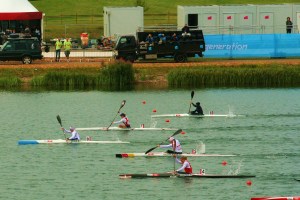 So after ten different events in eleven venues it was time to head to our final Olympic session. With only two more days available before we headed to our pre-season football training camp in the wilds of Suffolk, and few new tickets appearing on the website (even at 2am when I set my alarm to check) this was likely to be our last session of the 2012 London Olympics. Eton Dornay had been the scene of some fantastic triumphs last week with Team GB proving once again that we were the kings and queens of the water and we hoped to see that continue with our trip down to Royal Berkshire.

After the success of the rowing it was now time for the canoeing and the kayaking. It’s quite confusing as to the difference between them all, especially as you also factor in the Canoe Slalom that had taken place at Lee Valley last week. So here is my explanation of the differences between them all:-

Slalom Canoe – a race down a 300 metre course that has a 5.5 metre drop from start to finish and involves passing through up to 25 gates along the way. However, unlike the spring canoe, they are seated all the way down.

Kayaking – Similar distances as the Sprint Canoe but the people are sat inside, just like the Slalom Canoe

So, not confusing at all then.

Whilst Team GB had dominated in the rowing competitions, we weren’t expected to do so well in these events. However, it was still going to be a great event, and like eight of the ten events we had seen so far, it would be a first for the Fuller family.

The start time of 9.30am meant a very early departure from TBIR towers. Fortunately SouthWest trains had realized there was a major event on and put extra trains on for the hour(ish) journey down to Windsor and Eton Riverside. On arrival in the royal town we were supposed to be met by shuttle buses to take us on the next leg of the marathon. Unfortunately, it appeared that they were all at Eton Dornay, the organiser failing to co-ordinate their arrival with the trains. Finally a few arrived and we made the ten minute journey to Windsor Racecource where the next stage was the 1 kilometre walk across the racecourse to the security screening. Total journey time – 3 hours.

The weather wasn’t great and it seemed that the privileged few in the stands opposite us had not bothered to attend again with virtually the whole stand empty (this was another “sold out event” but the real spectators were in fine voice, cheering on the early heats featuring the GB team. Apart from the Athletics yesterday, this was one event where it seemed that there was more non GB fans in the crowd than our home fans. That lead to a good atmosphere in all races and something that encapsulated the Olympic spirit perfectly.

Tuesday 7th August 2012 – Canoe Sprint
The whole complex, featuring this huge 2 kilometre long stretch of water, is actually part of Eton school. Let’s just think about that again. The best rowing/canoeing/kayaking facility in this country and one that was hosting the top athletes in the world was actually a small part of a school. The privileged few eh!

The delays at the station had meant that we had already missed a couple of the heats, but we arrived in time to watch the women’s 500 metre heats. The purpose of these was to produce 24 semi-finalists from four heats. All sounds quite simple, right? But the ridiculous situation was that there were only 25 competitors in the four heats. So four races, in which all six canoeists qualified from three heats, and in the fourth six out of seven went through. The (very) unlucky loser was the girl from Iran. The announcer justified the need for the races by saying they were competing for the lane draw in the next round, but it did seem relatively pointless to most of the crowd.

During the next two hours we saw races in 500 metre and 1000 metre variations of the Canoe and the Kayak. The highlight was the heat and semi-final featuring Tim Brabants who had won Gold in the 1000 metres race in Beijing and once again qualified for the final.

In true Olympic spirit there were competitors from countries who knew they had no chance of a medal but saw it as an honour to simply compete. In the various races we not only saw the “lucky loser” from Iran, but also canoeists from The Cook Islands, Uzbekistan and Cuba.

Two hours flew by and before we knew it it was time to head back to civilization. Another notch on the new sport bedpost and long may this Olympic adventure carry on.

More photos from the morning can be found here.

With the Olympics coming to an end, the sporting focus will move to the start of the Premier League season.  But if you cannot wait for this, then kill some time playing some sports games over at Betfaircasino.com.  There are some great football games to play, including ‘Penalty Shootout’ and ‘Football Rules’.  Which one will you choose?