After the excitement of the Beach Volleyball on Monday, I was unsure about going to watch the standard game. The game is essentially the same but with a few big differences, if that makes sense. Firstly, instead of having just two players per side on court at any one time there would be six. Secondly, in the beach variation the initial “block” is counted as one of the three shots and finally skimpy bikinis are frowned upon. It is similar to the reaction of the members to the MCC sitting in the pavilion at Lords watching a floodlight Twenty20 game.

I had seen impromptu games played all over the world, whether it be in swimming pools in the Costa del Sol (well, ok, Centerparcs) to Greenwich Park. With the only equipment needs a net and a ball it was hardly the most technical game to play. Oh how wrong I was. I mentioned the simplicity of the game to a chap at work. Forty five minutes later, with my cup of tea still in my hand now stone cold I managed to pretend my phone was ringing to escape the lecture.

Did I not understand the differences between playing a 5-1, 3-2-1 or a 3-3 formation? Did I not understand the role of the Libero (no I had to Google that one) and wasn’t I aware of variations of the game including Hooverball (created by ex-US President Herbert Hoover that used a medicine ball) and his favourite Nuke ’em Ball where the ball is basically thrown at the opponents. Next time I will get someone else to make my tea.

Tickets had once again been easy to come by a few weeks before the Games started and we made the early morning trip into London. The Littlest Fullers, now on just their second “commute” of the week were already questioning why people did this every day. Getting up at 7am is not fun for 9 and 12 years olds apparently, nor is having to stand on trains. Oh the beauty of naivety. On the way to West Brompton (thus avoiding a 15 minute walk at Earls Court – *tips his nose with his finger*) I gave the Fuller girls a run down on the venue.

Originally the plan was to have four arenas within the Olympic Park that would host events including the Volleyball. However, planners were concerned that firstly the Park would get too crowded at peak times, and secondly they could not find a legacy for another venue there. So a decision was made to find an alternative venue in the capital. Earls Court, built in 1937 was one of the few venues that could be used to host the event as well as ensuring that less pressure was put on the transport hotspots around the capital.

The history of the venue is certainly interesting. In the 19th century it used to be a fairground site, hosting such events as Buffalo Bill’s Wild West Show (which sold over half a million tickets in its short tenure), a huge funfare with a 300ft wheel, called the Gigantic Wheel and Captain Paul Boynton’s Magnificent Water Chute which was THE white knuckle ride of the Victorian era.

It wasn’t until 1935 that plans were laid out for an Exhibition Centre to fill the barren wasteland. Interestingly enough, at the same time Chelsea FC were looking at options for their Stamford Bridge ground just a mile to the south of Earls Court. If only they had been able to move back then – none of the issues surrounding their ground and lack of expansion opportunities would be relevant.

It opened late and over budget in 1937 but it was viewed as one of the finest exhibition spaces in the world. It is hard to believe that in 1939 a capacity crowd listened to the doctrine of Sir Oswald Mosley and his British Union of Fascists in the there – I cannot see that being allowed today!

But we were here for one reason and that was more Olympic fun. Another breeze through security thanks to the efficiency of the Armed Forces and we were in the cavernous old venue. There was certainly no shortage of space in the concourse areas, and after a long walk up the stairs we found our seats…

Hmmm…I was aware that some venues “may” have restricted view seats but having one directly behind a massive support column was certainly a “very restricted view”. Fortunately we seemed to be sat in the “we think nobody will want to sit so high up” section, and it was pretty much empty (this was of course another “sold out” event). In fact all the blocks on the top-level seemed to have lots of empty seats – again, not exactly a tick in the box for LOGOC and their flawed ticketing strategy.

But back to the games. I had been given a handy(!) print out by the chap at work on some of the moves the players would make. I needed to understand the difference between a Dig and a Spike (check), a Shank and a Pepper and of course a Six Up. When I read the last one out, CMF couldn’t help a little giggle…apparently there were adult films that featured such acts although I had no idea what she was talking about (Although I think she was referring to a Six-Way) 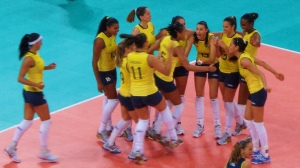 First up was the Brazilians versus the Chinese. I had heard good things about Brazilians…and also their volleyball team (boom, boom). They were one of the favourites for gold and to use a relevant adjective, they were Amazonian in size. Everyone of the team, bar the “libero” was over six-foot tall. I expected this game against the Chinese to be a walk in the park but it was nothing of the sort.

Another thing I was completely unaware of was how long these games could go on for. I applaud the fitness of the girls (as opposed to applauding them being fit) that they are still standing after 2 1/2 hours of rough and tumble. Whilst Brazil took the first set with relative ease, China bounced back and leveled the score. Brazil then went into a 2-1 lead before a tie-breaker in the fourth set saw the Brazilians lose three set points before China snatched it and leveled the score. However, sheer power won in the end and Brazil took the game 3-2.

However, this long game had caused a problem. The session was a 3 1/2 hour one and due to end at 1pm. The second session was due to start at 1.45pm and obviously people would be entering the venue from an hour before. But the Brazil v China game had already eaten up 2 1/2 hours, and we still had Russia v Japan to come (the second session finally got underway at 3pm).

The second game was never really a contest. The Japanese team were dwarves compared to the Russians and apart from a little wobble in the second set, they won with ease. However, the atmosphere in the arena was still very good. It is without question that the use of music, especially in enclosed arenas, adds to the whole event and the Japanese fans were making themselves heard. Few people had departed after the first game, which considering the other multi-session events we had seen, was unusual.

Overall, great value for money – nearly five hours of top class sport for £30 each (less for the Little Fullers). Volleyball, whilst not quite hitting the aesthetic quality of the Beach variety had got a big tick in the box.

More pictures from the event can be found here.