There is something special about travelling around the country to watch your beloved team play. You get a totally different atmosphere at an away game to at your own ground as Thomas Rooney muses.

Punters that chase free betting offers will hopefully agree that the whole day is fantastic, getting up at a ridiculous time in the morning to get the coach/train or drive from one end of the country to the other.

There are a certain brand of fans that go to away games, everyone wants to be standing up, singing and really cares about the team.

As a Norwich fan, two away games that really stand out are Colchester United back in January 2010 and Tottenham in the season just gone. 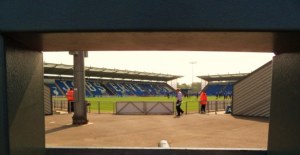 Although these games were two divisions apart, both meant just as much. The Colchester game in League One was a match that we had been looking forward to for a long time.

At the time, both sides were in with a shout of automatic promotion and after they had dumped the Canaries 7-1 on the opening day of the season, it was payback time. There was also the added spice that Norwich had taken their manager at the time, Paul Lambert.

The Norwich fans took over the town that day, showing what a massive fan base they had. With one end of the ground filled with yellow and green shirts, we watched a one sided demolition of Colchester, taking the game 5-0.

It was the kind of atmosphere that would be difficult to get at Carrow Road. The thing with away days is that all the action is in one stand, all the supporters are in one area.

It was that day that the Norfolk side really started to show they meant business and were serious title contenders. Even though the rain was pouring, everyone was in party mood.

Then, in April this year, Paul Lambert took his side to White Hart Lane and put in a superb display to beat Champions League hopefuls Tottenham 2-1.

Right from the off, Norwich fans did not stop singing and when Elliot Bennett scored the winner, it was pandemonium.

It was then when we realised that it was not going to ever get much better than this. When the team you support goes to a giant of English football and moves on to 43 points in their first time back in the Premier League, things are going very well.

No matter whom you play on your own ground you expect to pick up some points. However, away from home any sort of result is a bonus, making when you win even more special, especially against the big sides and that is why it makes for such a good atmosphere.