Back in the days of Henry VIII when the boat was the only method of continental travel, Tilbury was THE place to be. It was like the Las Vegas of England. It was the hotbed of sin, and the home of the finest culture. Quite simply, everyone who was anyone would at some point be seen in Tilbury, or Tilberia as it used to be known. Its fame and fortune came because of its strategic location on the Thames Estuary. Even today it has an important place in everyday commerce as one of the first or last (depending on how you view it) deep water docks on the river.

On the 19th August 1588, just as the rest of England was preparing for the start of another season of ye olde football, Queen Elizabeth (obviously the first but she was never known as the first as she would not have known there would be a second 400 years later) made a surprise visit to Tilbury. War was in the air with the Spanish (what were the odds on a Spanish victory back then I wonder?  Same as for them winning Euro2012?), and any day soon it was expected that an Armarda would sail up the Thames, stopping at Margate for a visit to Bembon Brothers Amusement Park, before continuing to London where they would buy a day pass to rape and pillage. Lizzy was obviously a tad concerned so she wanted to rally the troops at Tilbury. Her speech is one of legend today and it included the immortal lines:-

“I know I have the body but of a weak and feeble woman; but I have the heart and stomach of a king, and of a king of England too, and think foul scorn that Parma or Spain, or any prince of Europe, should dare to invade the borders of my realm; to which rather than any dishonour shall grow by me, I myself will take up arms, I myself will be your general, judge, and rewarder of every one of your virtues in the field.”

Rousing stuff indeed and it seemed to do the job as today we can still call the settlement Tilbury and not El Tilburia. But the river still dominates the daily life of the town. The fort that was build to protect the Thames is still in existence, the landing stages now welcome more paper for newsprint than anywhere else in Europe and cruise goers get their first taste of London with a view of Tilbury power station when they alight at the London International Passenger Terminal here.

But to me, a North Kent lad, Tilbury is all about the ferry. History shows us that enterprising individuals first starting charging passengers to cross the river in rowing boats in the late 16th century. The service was one of the most important river crossings in the 19th century as land owners from Essex brought their produce across the river to the market in Gravesend.

Today, the ferry is still going strong and the 700 metre river crossing takes just 8 minutes. During my school days in Gravesend we had often ventured across the water, and for a period of time when I was a bit too young I had a girlfriend in Tilbury and used this route frequently when I should have been studying. She was a bit older than me (me 17, her 26), had a strange tattoo on her left breast of the Winnie The Pooh, and had a 10 year old sister (which looking back now I think was actually her daughter) but this was in the days before Pumas, Cougars and Panthers so it was a badge I wore with pride, especially as she worked in a supermarket (on the kiosk) and used to supply me with packets of Marlboro, which I of course brought back across the river (did that make me a smuggler – if so I apologise) for my friends who indulged. So I have always had a soft spot for Tilbury.

So with a spare few hours on a Saturday I planned to take a trip back in time and revisit my youth. I was going to get on the ferry once again and see one of my true loves. CMF needn’t have worried – I was not going to fall back into the arms of Sally (names have been changed to protect myself) but into those of Chadfields, home of Tilbury FC of the Rymans League North. 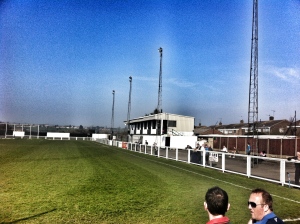 South Essex is awash with non league football clubs.  Within a 15 minute drive of Tilbury there is Thurrock, Grays Athletic, East Thurrock, Canvey Island, Concord Rangers, Brentwood Town, Aveley and Billericay Town.  Add in the attentions of professional clubs such as Southend United, Dagenham & Redbridge and of course West Ham United and you can see how difficult it is to sustain a club in this area.  But Tilbury do OK.  Despite fighting a battle last season against relegation back to the Essex Senior League they are faring better this season, in fact coming into this encounter they were in the play off spots, mainly thanks to the incredible goal scoring record of Alex Reid had bagged 10 in the last six games.

Their high point in recent years came when they won the Isthmian League Cup back in 2009, beating Harrow Borough in the final, whilst the undoubted low point came after the “Battle of Chadfields“, in the game last season against Grays Athletic where over 100 fans thought they were on the set of a Danny Dyer film.  Stone Island and Henri Lloyd did very well that day.

Hands up who has heard of Gorleston?  Nope, me neither.  I had to look it up on the t’internet.  To put you out of your misery it is a small village of 5,800 people close to Great Yarmouth.  But back in 1949 it seems that most of the village got in the old charabang and headed down to Tilbury for an FA Cup game.  In fact over  5,500 people crammed into the ground, which today remains a record attendance.  Those post war years were bumper times for all non league clubs (Gorleston actually played Leyton Orient at Highbury in a cup replay in 1951 – so now we are all educated).  This season the average is just 102 so I didn’t really need to worry about getting in.

The sun was shining as the ferry floated across the water, laden with misbehaving children, tired looking young Mums and men wearing lycra.  On the far side were relatives waiting to whisk them all (apart from the cyclists) back into the womb of Essex…all apart from me.  I needed to get a bus.  But in their infinite wisdom the local bus company’s twice an hour bus doesn’t wait for the ferry to arrive; it is due to depart 1 minute after the scheduled docking, so because I was a nice chap and helped two young Mums off the boat with their children from hell, I missed the bus.

So I had the pleasure of walking into Tilbury, past cars awaiting new owners, containers with mysterious cargoes and locals sniffing glue.  Welcome to England circa 1983.  I took the footbridge over the railway line, adorned with musical style graffiti including one which said “Is this the way to Amarillo” to which some local had put “yeah, and she with nosh you off for a £5″…nice.

Even with the sun shining it couldn’t make the place look much better.  Local residents sat outside their flats enjoying a Special Brew whilst berating “Wayne” or “Stacey” and I was expecting to see Frank Gallagher around every corner.

Eventually I found Chadfields.  Walk past Lady Tattoo and do a left, making sure you do not walk into the “Travellers settlement site” next door – you can’t that – it is the one with the biggest collection of Pitbulls in England wandering around.  After such an exertion I needed a beer and fortunately found the very welcoming club house that was busy with people watching the Chelsea v Spurs game on a foreign satellite feed.  Two Strongbows later I was ready to face all that Chadfields had to offer.

Tilbury 0 AFC Sudbury 1 – Chadfields – Saturday 24th March 2012
With both teams vying for a play off spot and just four points between them, this was always going to be a tight encounter and in the end a soft penalty was all that separated the teams.

The game started with the use of the regulation Red Ryman League ball for Sport Relief, which as most clubs have found, is like playing with a beach ball.  Sense prevailed after 15 minutes and it was ditched in favour of the regulation version.  Tilbury had a plan – I know they did because it was taped to the dug out so we could all see it.  Lulling the opposition into a false sense of security perhaps?

Chances were few and far between in the first period.  AFC Sudbury thought they had scored when a lobbed shot was scrambled off the line by a Tilbury player.  Straight away Tilbury had a similar chance with prolific scorer Reid trying to lob the Sudbury keeper but he was tall enough to catch the ball.

Just on the half hour mark Sudbury launched another attack and their centre forward fell to the ground with relative ease and they were awarded a penalty which James Baker slotted home.  A few minutes later the home side could feel further aggrieved when the referee failed to send off Sudbury’s Sam Clarke flew into a challenge with both feet off the ground, missed the ball and caught the Tilbury player.

Half time and as the sun was out I thought I’d treat myself to another cider.  With only a few minutes until the restart I followed a couple of home fans back in, holding cans of beer.  But I was stopped, and was directed to the notices on the wall – “No alcohol to be consumed in the ground.”.  It appeared I didn’t look “local” enough to be allowed to do this (according to someone on Twitter anyway).

The second half was more of the same.  Lots of huff and puff on both sides in quite difficult conditions, with a referee who loved getting things wrong.  A great example came near the end when the Sudbury keeper fell to the floor after catching a high cross.  He appeared to take one hand off the ball and a home player spotted this, kicked the ball from his other hand and started to play on.  Of course the keeper then pretended he was injured, the referee blew his whistle for a foul and consulted his assistant who then picked out completely the wrong player to receive the lecture.  Whilst this was going on, every man to a tee in the ground (players, supporters, woman in the Tea bar) were telling the ref he had the wrong man and who it was, but he was too proud/dumb/ignorant (delete as applicable) to admit his mistake.

The final talking point was a bad injury to Tilbury substitute Bostry Bansende who appeared to fall awkwardly as he turned with the ball.  Play was held up for ten minutes before he could leave on a stretcher, although most of those ten minutes were taken up by actually getting someone to find the stretcher and then get it onto the pitch.

My journey home was less traumatic as CMF had diverted through the lanes of Essex after a shopping trip to Lakeside.  I found her parked on the main road, doors locked and looking worriedly around.  It had been an enjoyable afternoon in the sunshine.  Just like Queen Elizabeth, I feel I had done my regal duty.