Saturdays defeat at Wimbledon dumped Dagenham and Redbridge to the bottom of the Football League.  Things look bleak but with a home game against fellow relegation rivals Northampton Town next up perhaps they could take a massive step to saviour.  Brian Parish gives us the story of the evening. 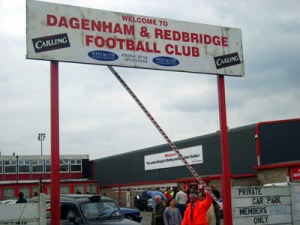 Ten days ago, after beating Bradford to complete a run of seven points from a possible nine, the clouds (although still very noticeable) were lifting with the hope that we might, just might, get away from the bottom of the table and closer to preserving our football league status. Fast forward to tonight, and two straight defeats have sent us back to 24th, and last in the football league. The clouds are gathering again, and this time, it looks like it could get very dark indeed.

March was always going to be a busy month, with seven games scheduled for these 31 days, but thanks to a postponement in mid-February, this was increased to eight, and tonight is that re-scheduled fixture. And not just any fixture, but one that is assuming the role of a major, pivotal point of our season. Our opponents are Northampton Town, who are just a couple of points and places above us. This is one of those games that the term “six-pointer” was invented for.

Back in September, we gave Northampton a two goal start, before a late Oliver Lee strike meant that we hoped against hope for a late, late equalizer. Like so much of our season though, it never came, and so we made our back to the east end of London with a result that has become more frequent that we would have liked.

The club though are still busy trying to halt our slide into the conference, and have completed a couple of loan signings in the last few days. Recent loanees Jonathon Bond and Ben Reeves (from Watford and Southampton respectively) have now been joined by Mathieu Baudry from Bournemouth. This is the fourth loan signing in recent times, with Josh Parker also coming in from Oldham. However, his failure to get to the correct meeting place for the team bus on Saturday meant that he didn’t play at Wimbledon, but the word from the management after the game was that he would be involved tonight. In a way, his inability to programme the sat nav properly, sort of sums up our club. Not in a good way though.

That then brings us to Ahmed Abdulla, who is another who has spent time on loan at the Daggers this season (just how many players can you have in on a temporary basis during a season?). Having gone back to West Ham after his original month loan expired, his contract at the Boleyn was cancelled, and Ahmed is now back, but this time it is on a “short-term” deal, which I would guess means that he will be a free agent come the summer.

It all brings back into the forefront, the thoughts of how effective loan signings can be. Do they provide the impetus that a team sometimes needs? Or are they a hindrance? Those coming in on loan are only there to provide a temporary stop-gap before the regular player returns from injury or suspension. A look through our squad list shows just how many players have come in on loan throughout this season, which according to Dagenham Dan, must be pushing at least a hundred or so.

To be honest, the league position isn’t the only bad news to have hit the club recently. The recent Bradford City game was the clubs annual anti-racism day, which they have done for the past couple of years. There is face painting going on before the game, as well as local school bands, and the great and good of both clubs, local councils and anti racism organizations sign up and pledge to continue the fight.

On this day though, a group of people took it upon themselves to racially abuse a group of Bangladeshi kids that were attending the game. The local papers covered the story, and at this time, at least nine have now been banned from Victoria Road. Given the recent successes of the B.N.P. in local elections, the club are to he commended on their attempts to unite the community. However, there will always be those who attempt to derail the process. At least there are fewer now to spout their views at our ground.

Tuesday 13th March 2012, Dagenham & Redbridge v Northampton Town, Victoria Road
As we make our way towards Dagenham East, Graham makes an announcement that he reckons that tonight’s game is like our home game with Chester, back in February 2008. We urgently needed a win that night as well, and in the process, racked up our biggest win if the season. At least someone is confident, as the atmosphere on the bar prior to the game is one of nervous apprehension.

The game starts with a decent sized crowd (the original fixture had been designated as a “kids for a quid” game, and had been retained for tonight) and the Daggers begin well, with Spillane’s sixth minute free kick being our first attempt at goal of the night, but it is wide of the mark. The visitors take a bit of time to settle, which they eventually do. Adebayo Akinfenwa is a solidly reassuring presence up front, and is apologetic about each mis-placed pass he hits. Like anyone is going to argue with him…

The game really gets going after half an hour. The Daggers get a corner, and it appears that captain, Mark Arber is going to be heading the ball goalwards. A split second before he gets there, it is cleared, and gets to the lightning quick number 24, Tony Silva. He starts his run and just goes on and on, and before we’ve even had time to draw breath, he is bearing down on our goal. His shot though is saved at the expense of a corner. We have been warned.

From the next Northampton corner there is one almighty scramble, and if we’re being honest, they should be in front, but somehow we manage to keep the ball out. From sixty-odd yards away, it’s difficult to see just who does what, but there is an audible sigh of relief as the ball is eventually hacked clear.

As half time draws closer, we are able to reflect that it’s good to have Luke Howell back in the team, having been injured in September. It’s taken a while, but it is good to have someone who is able to offer a reassuring presence in midfield. There is juts time for a Damien McCrory free kick to be deflected back towards the Northampton goal by a visiting defender, forcing Matt Duke to produce an excellent save, but on reflection we can feel reasonably happy with a 0-0 at the interval.

The second half is not so good. Just after the hour, the only goal of the game arrives. Michael Jacobs is allowed to cut in from the Northampton left wing, and shoot right-footed towards the Dagenham goal. Chris Lewington, recalled in place of Jonathon Bond, manages to make a low save, but can only parry the ball into the path of Silva. Six yards or so out from goal, he can’t miss, and doesn’t. Dagenham 0, Northampton 1. The away fans produce the noise, and all we can do is just stand there, hands on heads, with the dawning realisation that this might be the moment that relegates us. All the chat in the terraces stops; it’s like all the life has been sucked out of the home crowd.

With twenty minutes to go, John Still makes his first change; Brian Woodall is replaced by our very own Peter Crouch look-a-like, Rob Edmans. Within a minute, Josh Parker produces a good run, but shoots wide, and the home crowd start to find their voice again. Time though is starting to run out, and in the last twenty minutes, it’s more hit and hope stuff, than structure to the play. We eventually end up with four up front, and Northampton counter this by playing five at the back, withdrawing Akinfenwa and the goal-scorer, Silva.

There are four minutes added, and there is one final roar of encouragement from the Daggers fans. Half way through, Josh Parker is unmarked and free in the six yard box, but his header at goal is straight at the keeper. If the ball goes either side of the keeper, it goes in, and we can maintain the dream of survival.

The Daggers force one more corner, late in stoppage time, and after shouts from the crowd, Chris Lewington advances into the opposition penalty area. The cross is sent over, partially cleared, and falls to a Daggers player on the edge of the box. His shot is lashed back in, and doesn’t get any touch on the way through, and goes out for a goal kick.

The final whistle brings the evening to a close, and with it, many people’s belief that we will still be a Football League club in two months time. This was seen by many as a must-win game, and it was the visiting supporters that go home with the points and the hopes of staying up. For us, ten games remain to save ourselves. In order to stay up, we will need to produce form more worthy of a team chasing a championship, than battling relegation. These are dark days indeed.