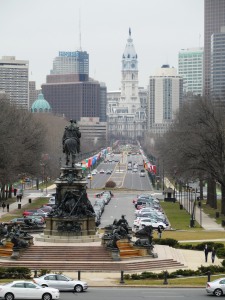 Last Saturday I hopped on a train from New York Penn Station along my very good friends @lugepravda and @Luciejallen. Seventy minutes later and fifty dollars lighter we alighted at Philadelphia 30th street Amtrack station. We were here on a whistle-stop tour of the sights, starting with the famous Rocky steps at the Museum of Art. From this vantage point you can see downtown Philly at the far end of the Benjamin Franklin Parkway. This tree-lined boulevard runs for around a mile in a straight line to JFK Plaza. On either side are the flags of the various nations of the world. As we approached the end of the boulevard we found United Kingdom, which irked us as there had been no English flag yet the Scottish flag flew proudly and not far in the distance we could see the Welsh dragon looking down on us.

Now correct me if I am wrong here but there seemed to be some inaccuracies in the list. We all know that many Americans have yet to travel further than their own state yet alone across its borders, but after the United Kingdom came Uruguay, then Vietnam, Yemen and finally bizarrely Israel. Hang on what happened to Zambia? Zimbabwe to an extent I could understand. I’m not getting all political here but many countries foreign policy of “if we pretend they don’t exist, nothing bad will happen” means they ignore the Mugabe regime, and it seemed that is exactly what Philadelphia had done. 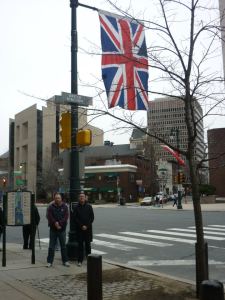 But Zambia? What had they done to offend the home town of Will Smith, Grace Kelly and Teller (of the Penn variety ironically)? Why were they denied a flag? I was outraged at the injustice so I tweeted the mayor Michael Nutter (@Michael_nutter). He didn’t reply, so every day this week I have tweeted him and asked him why the flag has not been given it’s right of place. Zambia, a country now thanks to its exploits in the African cup of nations on everybody’s lips.

At the start if the tournament you would have got at least 40-1 on the Chipolopolo winning the tournament, but that is just what they did, beating Ivory Coast on penalties. Currently ranked 71 in the world the team had overcome one of the greatest ever football disasters in 1993 when a plane carrying the team to Senegal crashed and the whole squad was killed. To come from utter destruction to being the continent’s top nation in just ninteen years is nothing short of staggering. And that is why I feel that the city of brotherly love is bang out-of-order for ignoring the Zambian flag.

The intricate details of the tournament have been covered by greater men than me, but I do have one little further snippet of information up my sleeve.  Let me take you back to March 2004.  At the time I was in a job that basically allowed me to spent my employees money on sponsoring football at the lower reaches of the Football League.  I liked working with certain clubs, and in return they got my “favours”.  One such club was Cambridge United.  Voted Best Football Food club in 2003 thanks to their fantastic bacon rolls, they had a brilliant commercial team headed up by a young lady called Lucie Benn.  Off the field they were doing so much to try to get things working.  On the field it was a different story.  As of the end of February the club had only picked up nine wins and were flirting far too close with the drop zone to Non League football. 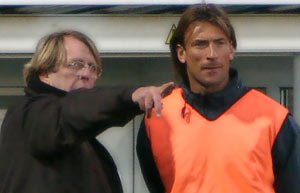 In what can only be described as a coup-and-a-half, The U’s managed to tempt internationally renown manager Claude Le Roy to the club.  The Frenchman had coached domestically and been an advisor at AC Milan before leading Cameroon in the 1998 World Cup.  He also had managed Senegal and Malaysia.  He arrived, as he said at the time, as a favour to his long-term mentor, Hervé Renard, who was to become first team coach.  Renard had worked with Le Roy in France as well as in China with Shanghai COSCO.

On his arrival at the Abbey Stadium, all of the talk was of how handsome he was (well, on the phone calls I had with Lucie anyway) and how he would break some hearts in the city centre.  Sod the fact he had come with a job to do to save the club from relegation!  Initial form showed something had changed though in the club as the U’s picked up points from their first home game against Cheltenham Town.

Two weeks later, on a very chilly Good Friday night I arrived (along with CMF and Football Jo – obviously more interested in the new coach than the football) for the game against York City.  We were sponsoring the game and prior to kick off we got to meet and have a cup of tea with Claude Le Roy.  A charming man, studious in his looks with his scarf, floppy hair and John Lennon-style glasses, he spoke at length about fitness in the English game and the culture of not taking care of diet.  He explained that his role here was as an advisor to Renard, that he thought the team were good enough and finally asked where I bought my tie from as he really liked it. 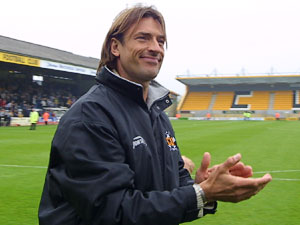 The game saw a fired up Cambridge team easily outplay the visitors York City, winning two nil.  After the game as is the privilege of being a sponsor we had a picture with the ball, Le Roy and a shy Renard.  I unfortunately did not get an opportunity to speak to him, but cougar-in-the-waiting Football Jo did and assured me he was a “proper man”, whatever that means from a 30 second conversation.

Le Roy left at the end of the season, having saved Cambridge from the drop, going on to take the helm in the Democratic Republic of Congo.  Renard stayed in the hot seat until December before he was dismissed, teaming up again with Le Roy in Ghana in 2007.  Just a year later Le Roy advised him to apply for the vacant position in Zambia where he led them to the quarter finals of the 2010 African Cup of Nations.  Despite a brief spell in club football and as head coach of Angola he was back in the Zambian hot seat in early 2011 and the rest, as they say, is history. 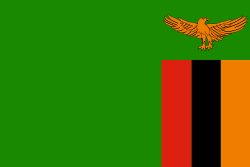 So Mr Nutter, elected mayor of Philadelphia, give some respect to a small African country who defied odds of 40-1 to win a tournament with a young French coach at the helm.  You can tweet Mayor Nutter here.