“Northern Steve loves gravy”…He held the T-Shirt aloft that I bought him for his birthday and chuckled a Northern laugh.  My Brother-in-Law is not predictable – he is married after all to CMFS (Current Mrs Fuller’s Sister) who keeps him just enough under the thumb to ration his gravy intake.  He doesn’t get much joy being a West Ham fan based in Lincoln, apart from an odd outing to see them play at the likes of Derby County.  But a couple of times a year we do enough good deeds around the house (essentially meaning we buy the kids a couple of DVD’s and our respective Newtons a bottle of Lambrini) and we head off to the wilds of the Northern Non Leagues on the search of meat based products laced by rich, smooth, hot gravy.

Our last trip had been to Gainsborough Trinity back in the spring of 2011 where we had found a perfect Pukka Pie which Brian Little had his eye on – I mean he wouldn’t have been looking at us fine strapping lads would he?  So we were long overdue a trip.  CMF and CMFS came up with a cunning idea this year for Christmas.  Or so we thought.  “Let’s not buy each other Christmas presents, but put the money towards a night away somewhere” She told me, which of course translates to, “You pay and I will drink the mini-bar dry”.  I agreed, knowing the power she has over “that” drawer in the bedroom as long as Northern Steve and I could go to football.

“Of course angel.  As long as Rachael and I can go shopping/to the spa/male strip club”..I cannot remember which in all honestly after she said “of course”.  So we looked at venues.  CMFS was set on Liverpool.  Me, less so for a variety of reasons, primarily because I had heard gravy still hadn’t made it that far down the M62.  So Leeds was agreed on and we fixed a date. I set off on Saturday morning, from New Eltham to Kings Cross and then onto Leeds via Newark (anagram of Wanker by the way).  I met the rest of the party there and after checking into the hotel and checking out the bar it was time for some football.

And as luck (insert winkey smiley here) there were a variety of Non League options just a few minutes train ride away from the city centre.  My first choice was Blue Square Bet North side Guiseley but then Hartch stepped in.

“Oh, no Stuart lad.  We will be going to THE NEST”  The decision had been made for Northern Steve and I.  We were heading for the Throstle’s Nest, home of Farsley FC.  The Villagers, as they are known, used to be better known as Farsley Celtic (and also called The Villagers), which is a bit confusing as Farsley is actually a town in its own right and was the butt of a joke in a Monty Python sketch about pink blancmange (according to my Dad anyway).  Hartch had lived for many years in the car park at the Nest.  Not literally, but basically where the old car park used to be.

Hartch promised a top afternoon.  Northern Steve wasn’t sure but I lied and said he had laid on strippers in the Farmers Inn public house.  He was as good as sold on the word “laid”.

Farsley Celtic had been a big name in these parts.  They played for one season in the mid-2000’s in the Blue Square Bet Premier, and were only actually one league below Bradford City and just two away from Leeds United for that glorious period.  They over gambled on what it would take to compete at the top table in Non League football and were relegated at the end of the season.  The following year they started in the Conference North with a 10 point penalty for financial irregularities and by March 2010 the club had called it a day.

But with local support, the sweat of a band of volunteers and some local people with a vision, the club reformed in time for last season and won the Northern Counties East League Premier Division at a canter.  This season the story had been similar as they had surged up the table of the Evostik Division One North, just one level below the Blue Square Bet North.

Warrington Town were the visitors on this cold, crisp, Yorkshire afternoon.  The fifteen minute train journey had been a one can strategy and when we arrived at New Pudsey (not to be confused with that yellow bear from BBC Children in Need who is “Old Pudsey”)  we were met by Hartch.  “You’re on my manor now” he said in a menacing way, not sounding dissimilar to Harold Shand in the Long Good Friday.

We stopped off at the Farmers Inn, a huge cavern of a pub, more akin to a village hall.  We told Steve that the Stripper was off ill after she developed a nasty burn from taking off her nylon thong too quickly. He was disappointed, but the promise of pie, beer and lots of hot gravy soon perked him up.

AFC Farsley 0 Warrington Town 1 – The Throstle’s Nest – Saturday 21st January 2012
With the wind and rain sweeping across the ground it was no surprise that the only goal of the game can be noted with the assist from a Mr Gail Force.  Ten minutes into the game Warrington’s Matty Cross took a corner that found the jet stream and smacked into Farsley’s Tom Jackson and flew into the net.  The wind dominated the first period, causing all sorts of problems for the home team, especially the keeper who could hardly kick the ball out of his own area. 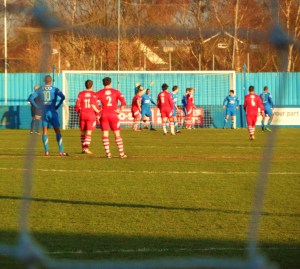 After ticking off the obligatory dog in a football ground, a Deputy Senior Steward (there were only two stewards in the ground) and an aging member of a 70’s pop group during the first half we headed into the bar for some warmth.  In truth the weather was spoiling the game.  The referee was also struggling to control the tackles flying in on the pitch, and the number of “dust ups” had overtaken corners.  It was amusing to see (and hear) the managers also trying to adapt their language in shouting at the female linesman.  Not that it bothered her in the least, telling them to “Shut ya trap” on a number of occasions.

The bar was packed.  In fact it was strange to see so many fans in their with their Farsley shirts on watching Sky Sports News whilst the game was going on.  The clubhouse is a seven day a week venue and is a key source of revenue for the club.  Any move up the non league ladder is dependent on what the club can bring in off the pitch.

The second half saw the wind drop for awhile, and was replaced by rain.  As Dolly Parton once said, you need the rain before you can have the rainbow and sure enough it appeared soon after, distracting most of the 229 people in the ground for a few minutes.  Farsley continued to attack but they simply could not break down a dogged Warrington defence.  The away fans, complete with drum, big flag and a man holding a stopwatch (who occasionally shouted out random times to the crowd around him) looked on nervously, feeling a home goal coming before too long.

With time ticking down they threw everything at the visitors.  In the ninetieth minute they had a final corner.  Bambrook’s corner found that jet stream again and the ball hit the post and there was a big shout for the ball having crossed the line.  “Play on” shouted the referee and a smart overhead kick from Jackson looked like it was blocked on the line by a Warrington hand.  “Play on” came the shout again from the referee but it was too late. Warrington took the spoils and the Farsley fans had to content themselves with a balm cake and a pint of Tetley. It hadn’t been the best of games (unlike the Guiseley game which had ended 4-3), but it had been a warm welcome from a club who pride themselves on being at the heart of the community.

Hartch kindly took us back into the bright lights of Leeds.  The girls were already tucking into the free bar so it was rude not to join them.  By 9pm we had ventured out into the city and stumbled upon the BierKeller.  The place was heaving.  Five hours later after an evening of Oompa music, thigh slapping and general dancing and singing to songs that would really embarrass the kids we headed home, tired, partly deaf but battle hardened.  My journey to New Eltham to New Pudsey  was complete.