Strictly Come Passing was the headline of the email Abi Davies sent me last night with her match report and who can argue.  Possibly the finest win the Swans have ever had in front of a global audience of millions will have put them firmly on the map.  Even the usual Wenger moaning after the game couldn’t detract from a fantastic display of football. 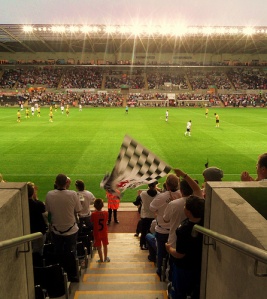 Following two successive victories away from home, Swansea City were looking to continue the form that had seen them defeated just once in their last seven prior to Sunday’s fixture.

Given the calibre of Swansea’s performances thus far in the top flight, the majority of Swans fans were optimistic ahead of the game despite the Welsh side being written off by the majority of pundits.

With Swansea possessing mass strength in depth throughout their midfield, Brendan Rodgers had many options at his disposal for Sunday’s game, and opted to reinstate Joe Allen in place of Andrea Orlandi whilst Kemy Agustien and Leon Britton retained their places in the side.

As expected, Robin Van Persie returned to spearhead Arsenal’s attack, having been rested for their FA Cup fixture last weekend. The Dutch striker didn’t take long to exhibit why he has received many plaudits this season, breaking the deadlock within the opening 5 minutes. The centre forward latched onto a great through ball from Arshavin, pausing to unsettle centre back Caulker before slotting the ball past Vorm at his near post.

The Swans were not trailing for long ,as they were gifted the perfect opportunity to get back on level terms with 15 minutes played, as Welsh captain Aaron Ramsey was adjudged to have brought down Nathan Dyer inside the penalty area. The ref had no hesitations in pointing to the spot and Scott Sinclair calmly stepped up and converted. Retaining his perfect record from the penalty spot.

Following Swansea’s equaliser the visitors appeared to be rattled. For the Swans were controlling the game and doing to Arsenal what you so often see them do to sides. Having been criticised for not creating sufficient chances this season, the home side were relentlessly asking questions of the Londoners, causing countless troubles for their back line.

Despite the queries as to whether Swansea City are the new Arsenal, Brendan Rodgers’ side were playing with an air of resilience, desire and hunger that could not have been a carbon copy of their opponents.

Van Persie had a chance to restore Arsenal’s advantage on the half hour mark when Ashley Williams was caught out of position, however Steven Caulker came across to cover and block the Dutch man’s shot.

Arsenal’s only real threat was coming courtesy of Van Persie and Ramsey who both did well in advanced positions of the pitch throughout the game, causing expected problems for Swansea’s colossal defence.

Brendan Rodgers made his first change at the interval. With the game evenly poised, Sigurdsson was introduced, making his Premier League debut he impressed instantly. A set piece specialist, we posed a far superior threat from corners with Sigurdsson’s perfectly weighted deliveries. The Icelandic midfielder had a great work ethic, quick feet and linked well with Danny Graham.

The visitors were the quicker out of the blocks in the second half, with chances coming for both Arshavin and Walcott- both failing to find the target with their efforts.  Swansea deservedly took the lead through Nathan Dyer with 57 minutes played. The diminutive winger remained composed to fire home his 3rd goal in as many games. Swansea were working as a unit, tracking back and playing some breathtaking football with their rhapsodic rhythmic passing. Neil Taylor was allowing Theo Walcott acres of space to run out wide, playing to the wingers one real strength. The England international seized on this freedom in the 69th minute when he worked his way into the box before chipping the ball over Vorm in order to provide Arsenal with an equaliser, scoring his first goal since October.

The knock out blow came within a minute of the restart as Sigurdsson played through Danny Graham who was able to find the back of the net from a tight angle.

Dyer and Rangel were interlinking to superb effect on the right wing, however Catalan Rangel did not deliver such an assuring performance defensively.

Henry made his Premier League return with just under 30 minutes remaining, however failed to make the same impact as he did when introduced against Leeds in midweek.

For me, the only worry for the Swans at the weekend were the full backs. Offensively both were impressive, however got caught high up the field a number of times. I felt they were drawn into almost playing as additional centre-backs on numerous occasions, meaning both of our wingers were forced into defensive rolls too frequently.

With Fabio Capello present for today’s fixture at The Liberty, Nathan Dyer delivered one of the most exhilarating performances of his career, showing his credentials offensively and defensively, he, along with substantially helping Swans to victory, staked the perfect claim for a place in England’s Euro 2012 squad.

This momentous victory for Swansea sees them soar into the top half of the Barclays Premier League table.