Ben Westmancott travels west to Wales for one of the most local derbies in the United Kingdom and sees an eleven goal massacre. 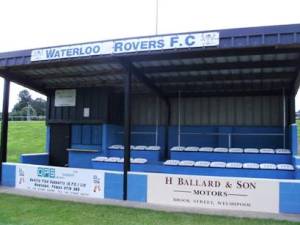 Local derbies rarely get much closer than this (geographically speaking). Waterloo Rovers and Welshpool Town occupy pitches at either end of Maesydre Recreation Ground in Welshpool. As far as value for money goes, £3 for one adult and two children is up there with the best. No programme though and no tannoy announcements, and with only one team sheet (guarded by the referee) matchday information was on the lean side.

The facilities at Waterloo’s ground are functional – just. No toilets, a minimalist tea bar, a 50 seater stand and small rooms for changing was about it. No floodlights hence the 2pm kick off. On the far side, park benches saved supporters from standing. Rudimentary but charming. Did I mention the lack of toilets? The sight of players running for pre-match relief behind the trees was a new one for me. And as for the inevitable, “Dad, I need a wee.” Well, enough said.

The crowd were in a jovial mood and there was a festive buzz around the ground.

The Welshpool manager, David Jones, went into this game with his only goalkeeper, Garry Foster, and influential midfielder Ian Brailsford out with suspensions after seeing red in the 8-0 League Cup defeat to Four Crosses earlier in the month. With several other players carrying injuries or being unavailable for selection, the Lilleywhites could only muster 12 players and that included the last minute registration of veteren goalkeeper, John Gough.

Waterloo Rovers, managed by Dale Roberts, were ready to exploit the makeshift starting 11 despite missing striker Steve Jones to a knee injury. A strong mid-table side, Rovers were looking to close the gap on the top two runaway clubs, Rhayader and Montgomery. Their superior pace and fitness showed across the field and after the first goalless half hour in which Welshpool’s captain, David Williams, was solid at centre back, the tide turned in Waterloo’s favour.

Rovers broke the deadlock on 31 minutes when striker Ricky Litchfield received the ball in the area from the right, chested it down and struck the ball cleanly into the back of the net. 1-0. The floodgates opened. Two minutes later he made it 2-0. Winger Ian MacLeod took the ball down the left channel and crossed to Litchfield who found himself in acres of space. The goal was easy. On 35 minutes it was 3-0 when MacLeod scored for himself.

The half time chats must have been startlingly different. In one room the message was one of keeping it simple and exploiting the flanks. In the other, the stand-in goalkeeper Gough was pulling out with an injury and a volunteer to pull on the number 1 jersey was being sought. Step forward versatile and game player-manager, Dave Jones. The only sub, Andrew Thomas, took to the field to replace the injured Gough.

The second half was barely underway when left back Chris Proctor tested Jones’ goalkeeping skills and found him wanting making it 4-0. Two minutes later a long ball sailed over the back four. Jones was stranded with the setting sun in his eyes and striker Steve Laws couldn’t miss the open goal. 5-0. A minute later it was 6-0 when attacking midfielder William Pritchard finished cleanly from just inside the area.

Moments later a Welshpool free kick just outside Waterloo’s area went straight to the opposition, was hoofed down to the other end and Laws made it 7-0. 8 minutes later it was 8-0 when number 8, Pritchard, struck a low ball past Jones after he had parried a powerful shot from Litchfield. With three players on two goals, the race was on for who would get the first hat trick.

The ninth goal of the game solicited the loudest cheer from the crowd. With all hope seemingly lost, Michael Cockram lined up a free kick for Welshpool, 30 yards from goal on the right similar to the one before. He looked up, picked his spot and struck the ball cleanly to score past McWhinnie’s outstretched arm. Get in!

Pritchard got a deserved hat trick on 88 mins from a tight angle before Litchfield completed his hat trick and the rout when his speculative thump caught a wicked deflection in the final minute of the game. The makeshift goalkeeper could but smile as he turned to watch the ball bounce cheekily into the net for a tenth and final time.

Tough times for Welshpool Town FC now that Waterloo Rovers have completed an unmistakable double over their close neighbours to firmly establish their credentials as the top team in the town.

Rovers look like a club with pride, and with their youth teams in place, all they appear to be lacking are improved facilities before they can push for promotion to the Cymru Alliance.

Welshpool FC count each game played as a success as they battle against the odds to keep the club, founded in 1878, from extinction.

After the final whistle, players and fans trotted back across the park to the superior changing facilities at Welshpool’s ground (they have toilets). Their ground has floodlights too but is not enclosed and is in need of development.

With two clubs so close together, both with grounds in need of investment but with scarce resources, and with no obvious deepseated rivalries, some sort of joint venture to keep football in the town alive and kicking might work. Couldn’t it?