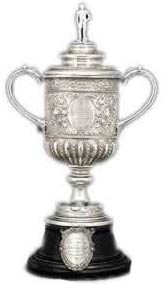 Back in 1872 with football clubs springing up left, right and centre it was the the vision of one man to create a nationwide competition to find out who the best team in the country would be. The Football Association drew up a list of teams who would be invited to play in the first ever competition.

With no Sky Sports, Talksport or 5 Live, nobody had an idea who would be the favourites for the competition, but it soon became apparent that The Wanderers were the team to beat, not only in the first ever competition, but in subsequent competitions.

But what happened in those formative years of the cup?  In the first twelve years of the competition the cup was won by a number of sides who today have disappeared back into the backwaters of amateur football.  But what was life like for them back in the late 19th century?  Well read on McDuff.

Back in 1872 The Wanderers had become a bit bored of the nomadic lifestyle which was not fitting for such a fine bunch of upstanding gentlemen.  Until 1872 the club, made up of ex-public schoolboys and “gentlemen of a fine nature, temperament and spirit” played friendlies across the country, and occasionally used a pitch in Battersea Park as their home ground.  In 1870 they decided that Kennington Oval would be more suitable, and agreed to share the facilities with Surrey Cricket Club.  This move was down to C W Alcock who was not only one of the founders of the football club, but was also to become the secretary of Surrey CC in 1872.

Alcock had his finger in a number of pies and it was his idea as secretary of the FA to set up a nationwide competition.  Of course with his influence on affairs not only did he manage to wangle an invite for his side The Wanderers, but also that the final would be played at their “home” ground, Kennington Oval.  Fifteen clubs accepted an invitation to play in the inaugural tournament which started in November 1871, although Donington School, Harrow Chequers and Reigate Priory all pulled out before a ball had been kicked.

Jarvis Kernick would have been the name on everybody’s lips if Match of the Day was being broadcast as he scored the first ever FA Cup goal for Clapham Rovers in their tie away at Upton Park.

Out of those initial 15 teams, only one exists today in their true form – Crystal Palace.  Others such as Hitchin and Maidenhead have changed their names.  Oh, and lest I forget there was Queens Park.  Yep, that would be Queens Park from Glasgow not the ones from west London.

Queens Park were seen as the ultimate example of playing a modern game of football and so they were invited to play in the competition for sporting reasons.  They were so impressive that they actually managed to reach the Semi-Finals of the competition WITHOUT playing a single game, after Donington School pulled out of the competition twice (see here for the explanation).

In a motion passed on the 11th June 1895 by Surrey Cricket Club football was banned from being played at The Oval. The last FA Cup Final played here was in 1892 when West Bromwich Albion beat Aston Villa in front of over 32,000.

On the 6 May 1954 Oxford University’s Iffley Road Stadium surpassed any achievements the University had ever reached.  Despite being only the second winners of the FA Cup it was athletics that hit the headlines around the world.  On that day the record books were rewritten forever as British AAA and Olympic runner broke the four minute mile barrier.

The stadium announcer for the race was Norris McWhirter, who went on to publish and edit the Guinness Book of Records as well as being Roy Castle’s stooge for many years. He excited the crowd by delaying the announcement of the time Bannister ran as long as possible

“Ladies and gentlemen, here is the result of event 9, the one mile: 1st, No. 41, R.G. Bannister, Amateur Athletic Association and formerly of Exeter and Merton Colleges, Oxford, with a time which is a new meeting and track record, and which – subject to ratification – will be a new English Native, British National, All-Comers, European, British Empire and World Record. The time was 3…”

The roar of the crowd drowned out the rest of the announcement. Bannister’s time was 3 minutes 59.4 seconds.

Anyone would think it was the most exciting thing ever to happen at the University, but they would be wrong.  In the 1872-73 FA Cup, the second year of the competition, Oxford University won through to the final in a very strange set of events.  After wins against Crystal Palace, Clapham Rovers, Royal Engineers and Maidenhead they raised Queens Park in the Semi-Finals.  That would be Queens Park, the Scottish league side who had been given a bye all the way to the semi-finals.  Unfortunately costs were prohibitive so they pulled out of the game, leaving Oxford University qualifying for the final.

At Lillie Bridge (now Earls Court 2) they faced cup holders Wanderers, who had been given a bye directly to the final. In front of just 3,000 spectators, Wanderers won 2-0.

The following year the competition was expanded and teams such as Brondesbury, Pilgrims, Amateur Athletics Club, Swifts and Trojans had entered the tournament in the first round.  In round three the two finalists were drawn together again.  After a one all draw at The Oval, Oxford took the cup holders back to University Parks and in front of 1,500 they inflicted The Wanderers first ever defeat in the FA Cup.

Drawn at home in the semi-finals against Clapham Rovers, Oxford University already knew if they won they would be facing the favourites for the cup, Royal Engineers who had beaten Swifts four weeks previously. Despite making additional provisions for the crowds at The Parks only 1,500 came to see the University win 1-0.  Less than three weeks later after beating Royal Engineers 2-0 at the Kennington Oval, Oxford University were the second ever winners of the cup.

At the time The Parks was simply a patch of common ground.  Today, it has been developed into an area of recreation for the city and also hosts the University cricket team. The University eventually moved to Iffley Road in 1921 when Spurs provided the first visiting team.  And the rest, they say, is history.

The most successful military team ever in England?  Few can doubt this claim after the Royal Engineers were three times runners up in the FA Cup sandwiched between their sole win in 1875 against Old Etonions at Kennington Oval.

The Royal Engineers in the late 19th century were the place to do your military service and so they had the pick of the best players.  They played at Great Lines, a hill high above the town centre and home today of the Naval Monument.  The club were pioneers of the pre-season tour.  It is amazing to think that top clubs these days head thousands of miles at the drop of a hat whilst in the late 19th century Nottingham and Derby were classed as exotic for the likes of The Royal Engineers.

The following year they began the defence of their title by beating High Wycombe 15-0 in Chatham, before getting a bye in the next round when “Panthers” failed to show up.  In round three they lined up in Great Lines against Swifts FC (who later became Slough Town) and the world of football was shocked as the Berkshire club ran out 3-1 winners.  Two years later they reached the final again, beating , Highbury Union, Druids, Pilgrims, Oxford University and Old Harrovians before losing to The Wanderers.

Unable to offer professional terms to players during the early part of the twentieth century the team their influence on the game faded.  The regiment still puts a team out today, although only within the local levels of the game playing in the vicinity of the original ground although, the Great Lines ground has since disappeared, but the Royal Engineers Social Club meet every year on FA Cup Final day on the original site to commemorate the achievement of their forefathers.

Part two featuring the FA Cup winners from 1879 to 1883 follows next week.