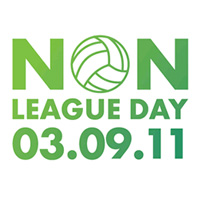 This weekend sees the second Non League Day.  With Engerland playing on Friday night and no distractions of the Premier and Football League, Non League clubs up and down the country are throwing open their gates to encourage those fans who have never really experienced real football to give it a go.

The simple fact of the matter that the majority of football going fans drive past these grounds week in week out to head off to the cathedrals of Old Trafford, The Emirates and the B2Net Stadium. This weekend is all about trying to encourage those fans to experience something new. Non League Day is not meant as a charitable act – in fact many non league teams are slashing their prices to encourage more people to attend a local game. Let me repeat that.  Non League clubs are reducing their biggest revenue stream to try and encourage those fans who think nothing of paying £40 to watch Championship football.

If 10% of the fans who go to watch the Premier League every week paid just £10 to watch a non league team then there would be £350,000 more going into the pockets of clubs who desperately need it. And if a fraction of those came back to watch a game then the state of football at the lower levels would see a small improvements.

Just over a year ago, fed up of the damage being done on and off the pitch to the club I have loved all of my life, I stopped going to West Ham every other week and decided to follow Lewes FC instead.  There were a number of reasons for this which I will not bore you with but in the past few seasons I had been all over the country watching the game in all steps  of the pyramid (aka the non leagues!) and had simply “seen the light”.  Last season Lewes were relegated.  Some of the performances were truly awful.  But did that stop me?  Actually no, it made me get involved even more and now I am proud to say I am an owner of Lewes FC, giving up my time free of charge to help the club.

But I understand you Premier League fans might be wary.  What happens if I cannot see the video screen?  Can I buy popcorn?  Will I have to wait for ever just to buy a pair of branded slippers?  Fear not – below is a simple ten point guide as to why Non League football is the best thing since sliced bread. And if you need more details on where your local non league team is then head over to the official Non League Day website.

Because you never know who you will bump into

Want to meet a West Ham legend?  Head into the bar at Braintree Town, or The Waterside at Walton Casuals and you can chat to Alan Devonshire and Tony Gale.  What about one of England’s finest wicketkeepers?  Well that will be Jack Russell sitting in the stand at Forest Green Rovers.  A European Cup double winner?  What about Basingstoke’s manager Frankie Gray.  It’s the way I tell them?  Well certainly at Chasetown where a regular visitor is Frank Carson.  Players, managers, celebrities and fans alike all head for the same bar after the game.

Because the players are playing for the love of the game
Few non league clubs below the Blue Square Bet Premier are full time, and so players are expected to feed themselves outside of the game.  This means that they are human, understanding the pains that fans feel themselves.  It also means that sometimes they have to miss a game to work (one non league coach regularly misses midweek games as he can earn more money as a taxi driver doing airport runs), because they are still on their summer holidays or to study for exams.  After the game they like doing human things too, so expect to see them in the bar having a diet coke, playing on the “fruitie” or even, dare I say it, talking to the fans without an agent, PR manager and a security guard in close attendance.

Because the fans are realists
Sure, every club has a website forum, and debate can rage about any issue.  But it is never malicious or vicious.  You will rarely meet a non league fan who thinks his team have a god given right to be top or constantly challenging for promotion.  Non League fans thrive on disappointment and broken promises.  They rarely believe spin or platitudes and that means reality hardly ever hits us hard.

Because it is great value for money

In the Blue Square North or South Bet this season the most you will pay to get into a game is £12, the least £9.  Most clubs charge £10.  And the kids?  Some clubs don’t charge a penny for under 16’s and most clubs only charge a couple of pound.  Or of course you could buy a programme and a burger at The Emirates for the same price…that is after you have paid your £50 to get in.  A day out at Three Bridges, just a stone’s throw from Crawley Town for two adults, parking, programmes and tea and a bacon burger will give you change from £20.  Some clubs are slashing their prices for Non League day even further.

Because at the start of every season every team has some hope
It is very unusual for any fans to get above their station at the start of the season.  With some very very rare exceptions the season kicks off with a relatively level playing field.  Apart from last season when those lovely chaps at Crawley were made favourites, it is rare for the bookies to get it right.  This season in the Ryman Premier the early markets suggested Lewes were favourites.  Four games in and rank outsiders Hendon are leading the pack.  And if you have a bad start, there is always the FA Cup.  And when you are out of that there is the FA Trophy or Vase…or county cup.

Because the hospitality is heartfelt
The people who work behind the scenes at the non league level often do so for nothing more than the pleasure in seeing people smile.  They go out of their way to try and provide a warm welcome, a nice environment and a cheery goodbye.  They welcome fans, not resent them being there.  I bet if the law could be changed they would encourage us all to be on that pitch come 5pm having a kick about.

Because you are still allowed to have a beer 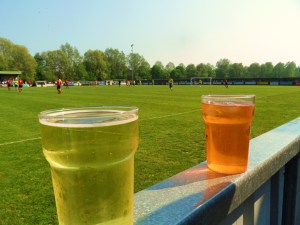 I am not going into the rights and wrongs of the Taylor Report but I fail to see how being allowed to have a nice pint of Harveys on the terrace at The Dripping Pan is allowed, yet if they are promoted to the Blue Square Premier it is illegal and I could be arrested.  And it is not just your fizzy pop lager on sale either.  As I mentioned, Lewes sell local Harvey’s Ale, Horsham sell the local Pullman beer, and Lowestoft still have a few barrels of Stones Bitter from the 70s that they sell on matchdays (not that the beer quality is in question, it is just a name we hadn’t head for decades).

Beer and football have always gone together and at this level to many clubs bar sales are a vital income stream.  The ironic over side to this is that in the FA Trophy or Vase where crowds are often a fraction of the league matches, alcohol cannot be served within site of the pitch.  Why is that ironic?  Well the title sponsor is Carlsberg.

Because the clubs are pioneers 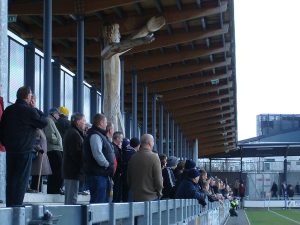 In 2010 Mansfield Town came up with the idea to “pay what you want” for their game against Gateshead last season – the result a sell out 7,000+ crowd.  Whilst the experiment has faded to an extent, remember Myfootballclub’s take over of Ebbsfleet United?  Free entry for under 16’s?  Lewes, Farnborough Town and others have given this one a go.  Half price admission for season ticket holders has been in place at clubs like Thurrock and Basingstoke Town for some years with success at getting “floating fans”.  Supporter owned clubs?  Really?  Yes – look at FC United of Manchester, AFC Wimbledon, Chester FC, AFC Telford United and of course my own club Lewes.  All owned by the fans on a one share one vote principal.  No one can own more than that.

And then there are the grounds…A twelve foot wooden man holding up a roof with grass on it?  Dartford said sure why not.  None of your identikit stadiums here. Tell me one real football fan who cannot look at the picture below and just feel a little bit in love with it?

Because you can make a difference
Contact a Premier/Football League club and ask if you can help out in any way and they will either point you in the direction of their commercial webpage or to the company that provides the stewards.  Do the same at a non league club and you may end up serving behind a bar, painting the changing rooms, giving our leaflets in the town centre about the game or contributing to the match programme.  And afterwards they say “thank you”. 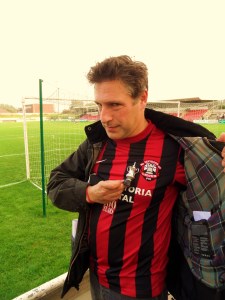 Blyth Spartans reached the fifth round of the FA Cup in 1977/78, Harlow go to the fourth round in 1979/80 and in January 2008 who can forget Havant and Waterlooville taking the lead in the FA Cup third round against Liverpool at Anfield.  Every year a couple of teams from the non leagues make it through to the third round and will financially secure them for years to come.  Every year the chairman of all non league clubs pray this year it will be them.

I could go on.  I feel more at home now standing on the terrace at a non league ground (or even a simple grass bank) than I ever was at Upton Park in my plastic seat.  I feel I have more in common with the people around me rather than the Premier League branded blinkered fans I used to share my Saturday afternoon/whenever Sky decide they will move the game to with.  And finally, I feel I belong to something more than a faceless brand – I feel like I belong to something worthwhile. 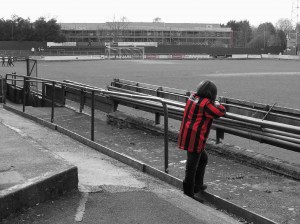 So what are you waiting for sitting in your armchair?  Don’t tell me you plan to spend this weekend watching “The Premiership Years” or that DVD of the Carling Cup 4th round game when you actually managed not to lose to Man Utd reserves in 90 minutes?  Do you bit for the good of the game.  Get down to a Non League game this weekend.  You never know, you may just like it!

21 thoughts on “In praise of Non League Day”