Hands up who knows what footballing event happened on Saturday 3rd March 1995 in a place famous the world over for golf?  It was change that has literally resulted in billions of pounds worth of revenue flowing into the game in some form or another.  Still none the wiser?  Well what if I said that it also resulted in us TV viewers being exposed to the intellect of the likes of Andy Townsend, Harry Redknapp and Edgar Davids?  OK I can see you have thrown in the towel so I will tell you.

On that blustery Saturday in the Turnberry Hotel on the Perthshire coast of Scotland the International Football Association Board met for their annual meeting.  Representatives from the four home nation associations plus the delegation from FIFA discussed a number of changes to the game.  Point eight on the Agenda was a proposal from the English Football Association to extend the half time period to a maximum of fifteen minutes.  Interestingly enough, the existing rule only permitted a five minute break, unless approved by the referee. Their reason was that the change was needed to “reflect the needs of the modern game”.  Apart from a slight amendment from the Scottish Association that half time could be shortened with the agreement of the referee the motion was passed and came into effect across the world on the 1st July the same year, changing the face of the game forever.

So the first few seasons of the English Premier League were played with just a 10 minute interval, as too was the 1994 World Cup in the USA.  Was that enough for players and fans?

It certainly changed the habits of the spectators in a stadium.  As new grounds started to be built, more emphasis was placed on food and drink revenue streams, but with such a short half time period, people didn’t want to miss parts of the match and so stayed in their seats.  So clubs benefited by giving fans that extra five minutes to go and queue to buy their £8 Emirates Burger or their £5 Manchester United souvenir popcorn box.

Did the teams benefit?  There is a medical argument that suggests that a fifteen minute “cooling” down period after a first half of football can lead to an increase in the likelihood of muscle injuries.  Significant amounts of research into the human brain suggests that our concentration span is actually less than 30 seconds, so any half time motivational talks by the managers have to be very short and very punchy.  Again hardly ideal for the extended break. So who was the real winner when the rules were changed? 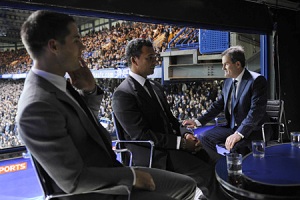 Simple answer – commercial television.  An extra five minute half time period meant and additional 3 minute advert break and thus doubling the amount of revenue the stations could gain.  During the World Cup, this meant billions to television stations around the world.   A longer break also gave the programmers an opportunity to introduce match “experts”.  Today we groan in disbelief as these former professionals struggle to string together a few words of interest about something that happened a few minutes ago.

One plus side though has been the opportunity for clubs to try and amuse the fans.  I have seen some cracking half time entertainment throughout the past fifteen years, and also some dire stuff.  My favourite still has to be a competition QPR used to run.  Pick three random people out of the crowd, make them run ten times around a broom handle then get them to run ten yards and score from the penalty spot.  Even funnier on a wet and muddy pitch.  Health and safety soon put an end to that one.  Danny Last recalls the age old tradition of Police Dog displays – “Pompey v Brighton in 1985 and at half time they lent the pitch over to a team of police dogs. Not to clear the pitch of hooligans, but for them to jump through hoops and over fences and stuff. And they did that thing they do when they shimmy through large plastic poles at a rate of knots. Marvellous scenes.” 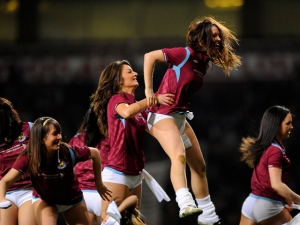 Today most clubs have abandoned the idea of providing anything for the fans.  Gone are the days of the Hammerettes dancing on the pitch at Upton Park in their two hundred denier American Tan tights, fake smiles and enough foundation to build a housing estate.  We did once have Bonnie Tyler singing “Total Eclipse of the Heart” although I am not sure why, and we used to bring out a table and chair for a youth team player when he signed professional forms but now their agents want an appearance fee and a revenue share of the gate receipts for such an act.  And of course Phil Brown took to entertaining the crowd a few years ago by doing his whole Hull City team talk including flip chart presentation on the pitch. Instead we are treated with the sight of up to eight substitutes playing keepy-uppy whilst wearing enough layers to impersonate an arctic explorer.

In their letter to West Ham fans at the end of last season, David Sullivan and David Gold assured them: “We want to bring the fun back. We want you to be excited on a matchday, and not just about the style of football. We are looking at ways to improve our pre-match and half-time entertainment and will welcome suggestions.”  What did the pair serve up to despairing supporters on Saturday as they trailed Chelsea 2-0 at the break? Nothing less than the Match Attax World Championship – i.e. two teenagers sitting on chairs, turning over football cards. Every bit as exciting as it sounds. (Thanks to the Daily Mirror for this little nugget). 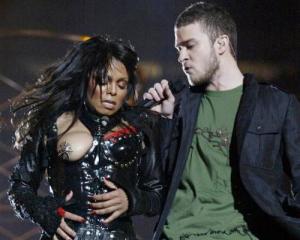 We are light years behind the US in this area, with almost every A,B and C list celebrity going wanting to appear on a pitch or court at some time during a game over there.  And who can forget the legendary half time show in the Superbowl.  A perfect lesson there as to how to feel a right tit!  But then again we do have an attention span longer that a gnat in the UK so we do not need such showmanship.  Audience participation seems to be the key these days.  The glamour of the “cheerleader” approach has been undermined by the easy access to scantily dressed women in our media.  And it wasn’t as if clubs used them for their dancing abilities, was it?

A search of some clubs forums on the subjects has thrown up some interesting ideas.  Hearts fans suggest “Beat the mascot” where fans have the opportunity to beat up the mascots (the furry ones on the child ones), blindfolded penalty competitions comes up frequently as too does pie eating. 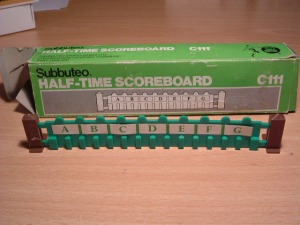 Even the anticipation of the half time scores has gone out of the window.  We used to have a complicated letter grid along the side of the pitch at West Ham, with each letter corresponding to a game listed in your programme.  At half time they used to put the scores up, sometimes written in chalk to “oohs” and “aahs” of the crowd.  So whilst one week A may be Arsenal v Leeds United, the next week it could have been Charlton Athletic v Bury.  The excitement of those few minutes.  Today?  Everyone has a mobile and many of us use a service like Livescore.com which gives us ridiculous amounts of information about any game in Europe.  “Pepe has been sent off again for Madrid” was a comment I heard at a West Ham game last season from a bloke next to me.  Really?  Does anyone really care?

At the non league level half times are valuable money earners for the club bars.  With smaller crowds they can serve more people and fifteen minutes is a perfect “one pint strategy”, of course whilst watching Jeff Stelling and the Soccer Saturday team running through all the scores.

If it ain’t broken, don’t fix it is not a maxim that applies to football, so it was with no surprise that a motion was included in the agenda for the meeting of the IFAB in February last year to EXTEND half time to twenty minutes.  The reason given:- “such that the walk from and back to the field of play can take players and match officials much of the current 15-minute half-time interval.”

What a load of crap.  What stadiums locate their dressing rooms so far away that it takes that long to get back to them?  The reason is simply more money.  More money spent on the clubs food and drink and of course more money in advertising.  Sponsorship analysts have calculated ITV’s advertising take at the last World Cup to have been at least £300,000 a minute, rising to £1m for England games. Easy to see who the winner would be for a longer break.

The motion was not approved, but based on the fact it has now appeared on the agenda twice in the past five years it is only time before it is approved.

So what would the consequence be for the average fan in the ground?  Twenty minutes is a long time to be “unamused” for.  Most clubs in the Premier League have big screens but they all feel that they need to pump out the same content on a ear splitting five minute loop.  There is only so many times you can relive the “Great Escape” highlights consisting of one Scott Parker goal against Wigan Athletic in a fifteen minute period, let alone a twenty minute break.  Clubs will need to come up with more ideas to engage with their customers, something they have failed to do for well over a decade.  When the product on the pitch is poor the last thing the fans want is an extended period of boredom, but then again when was the last time the fans had any say in the running of today’s game?