For over a hundred years football programmes have been the vital accompaniment to any match. Even the smallest, most insignificant game is normally commemorated by the issue of a matchday programme. I know some people who will not count that they have been to see a game unless they can get a programme or at least a team sheet.  They have also been in some instances a valuable commodity, with some programmes being sold at major auction houses around the world for more than £20,000, although ironically these days when programmes are mass produced glossy “brochures”, the programmes that fetch the highest bids on the likes of eBay are pirate programmes, often complete with spelling mistakes and miscredited photos.

When West Ham went on their last “European Tour” there was not a programme issued for the game in Palermo.  There was an official press pack that of course found its way onto eBay, but the greatest demand came from a fake programme issued in small numbers, and sold to arriving fans at Palermo airport complete with photos of Rio instead of Anton Ferdinand, and the recently departed Marlon Harwood instead of Carlton Cole.  Oh, and of course the club were managed by Alan Mildew instead of Pardew.

Original editions of some games are still in great demand from collectors around the world, but has the day of the programme now passed? Modern technology and our leisure time activity means that programmes are out of date the second they are printed. In the days of modern squads there is no finese in what the clubs produce, simply listing the whole squad, rather than listing the potential starting XI normally given to the programme editor by the manager himself. So why do clubs still persist in producing them, and more importantly why do fans still buy them?

I still tend to buy a programme when I go to visit a new club. Take Wealdstone for instance. I have nothing against them – it just happened to be one of the last programmes I bought when they played a pre-season game in late July against Dagenham & Redbridge. The club produced a 32 page programme covering their pre-season games against Dagenham and Watford later in the week for £2.

Value for money? Well not really. Take away 4 pages of adverts, 2 pages dedicated to the team line ups, 2 pages taken up by forthcoming season fixtures and you have 24 pages of content. Plenty there for everyone wouldn’t you say? Well, 9 1/2 pages were taken up to a review of the visitors Dagenham & Redbidge yet there wasn’t a single page devoted to Watford. The rest was a mix of photos and articles that had also appeared on their website. So what value did any fans get out of the programme? 9 1/2 pages for the away team? When there was more Dagenham players than fans at the game? Wealdstone fans surely don’t want to have such detail about a team they will more than likely never see play again.

Social media networks such as Twitter allow information to be shared as soon as it is released to all interested parties with ease. Wealdstone themselves use it to send out club news and update on games. Free software such as WordPress, Joumla and Drupal has enabled clubs to build websites that are attractive, feature rich and can be updated with ease. So is there a place for the match day programme as we know it?

Most clubs struggle to fill a 24 or a 32 page programme on a regular basis. There is a fine balance to be made in the lower leagues between making it profitable by selling advertising space or by filling it with well written and exclusive content that is fresh for the fans who buy it. Fans no longer want to read interviews with players who claim their undying love for the club and its fans, or that their favourite meal is steak and chips. They want something new, or do they? Adverts are usually irrelevant to the club and are simply in there because the commercial manager managed to do a deal on selling the space. How often do you see an ad “Wishing the Club all the best for the forthcoming season”? Simply a space filler. 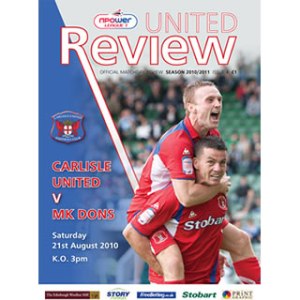 Carlisle United have taken a very bold step this year. They realise that most of their fans visit the website on a daily, if not a weekly basis. Some will also sign up to the club’s email newsletter sent once a week, and a few will follow the official and unofficial Twitter feeds and Facebook pages. So instead of churning out a 48 page programme filled with old content and adverts for £3, they are producing a much smaller edition for £1. Less content, but more relevant and interesting content.  And the result?  Virtually every edition has been sold out with a penetration rate of over 20% of match day attendees purchasing the programme.

Whenever and wherever England play an international you will find a small FREE magazine being given away outside the group called Free Lions. Written by the Football Supporters Federation it includes items such as location themed quizzes, information on the next away destination (or the current one), special offers for the fans and interesting content written by journalists and not the FA. But what is interesting content?

I have got involved heavily with Lewes FC’s matchday programme this season.  We realised last season that it wasn’t what the fans wanted.  So now the 40 page matchday prorgamme, which sells for £2 includes 12 pages of adverts, but 28 pages of new content.  Each away team has one page on the club itself, focusing on 10 facts about them whilst each player in the squad has one line on them on the back cover team line ups – for instance Andre Foster “has represented Trinidad in the World Youth Games”.  Other content includes articles that have appeared on this very blog (and Danny Last’s European Football Weekends site such as interviews with Clive Tyldesley and Kevin Day), a fans review of a previous away game and an unusual guide to forthcoming away days.

Why do clubs dedicate, as Wealdstone did, so much information on the away team? The away fans know everything there is to know about their team so its irrelevant to them, and do home fans really care about indept profiles about their opponents? Take West Ham (no, please). Last season when they played Manchester United they dedicated sections on Wayne Rooney and Sir Alex Ferguson – as if any fans who went to the game didn’t know about them.

Stats pages were always the most interesting part of the programme – but again the internet has changed that. The emergence of OPTA has revolutionised the way us nerds watch and analyse football. Want to know the impact of making a substitution had on a game, well there are sites for that too such as the excellent Zonal Marking. Away Travel section? How many fans would take one a programme with them when they travelled to a new away group? Compare that to those who simply type the postcode in their SatNav system to get accurate information including the latest travel. Away fans want to know where

Do we really want to read the egotistic ramblings of the chairman or the manager who throws in every cliche in the book in their description of the 6-0 defeat last week? Pictures from the most recent games? It is hard to make football pictures interesting at the best of time. Some of the best sports photographers I know, such as David Bauckham and James Boyes who specialises in non-league football, focus on the events around the pitch that bring life to the game.

So what is the future? Carlisle’s model is an interesting one and I will monitor it to see if it works. Certainly clubs need to invest in external content, looking at articles not just about their clubs, but about the world of football as a whole. There are thousands of excellent websites out there that produce new content every day – all they need to do is ask.