The waiting was finally over – whilst the “official” season isn’t due to start until mid August, the pre-season friendly season started today.  Yes I know we have the little matter of the World Cup going on in South Africa but I have been without a game for four weeks.  Four blooming long weeks.  Sure cricket had filled a gap, and the children had seen more of me than they ever had on a Saturday, but as soon as the pre-season fixtures started leaking out I constructed a schedule like no other to take advantage of a few interesting games.

So first up was Saturday 3rd July.  Not much really going on..that was until I saw one game that I simply could not miss.  Leyton versus Greenwich Borough was hardly going to set the pulses racing but when I saw the venue I had to re-arrange our family day out and forsake the Germany v Argentina game on TV to be there.

A few of us have experienced that feeling of coming down the steps at Wembley Park tube station on Cup Final day when your team is playing.  Butterflies in the stomach, everyone with their hopes and dreams still in tact and that walk….Well what else could match that?  What about finding a game on your doorstep?  Sure I have stayed at hotels that are part of stadiums (The Reebok, The Madejski and Upton Park) and hotels that are within a few minutes walk (San Mames hotel in Bilbao, Marriot in Hannover and Tulip at Old Trafford) but one that is within a few minutes of your house? 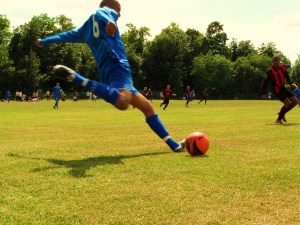 For some bizarre reason Leyton (the home team and from East London) had decided to play this game on the other side of the Thames in South East London – New Eltham to be precise.  And what does New Eltham have to offer?  A railway station, a Co-op, a dodgy pub, two tanning studios and a Greek restaurant – your average outer London suburb and home to TBIR towers.  At the end of our garden is a private golf course, actually one of the oldest in England and previously the hunting ground of Henry VIII no less.  And just next to that is EDF’s Sports Ground.  So can you see a link here?  Nope, nor can I but who cares – for the first time ever I was walking to a game.  Well, technically I could have walked, but I actually got the old bikes out for Lolly and myself and we left home at 2.57pm.

Three minutes later we were in position for THE match of the day between Rymans League One North Leyton and Kent League’s Greenwich Borough.  Both teams had claims to fame.  Leyton were formed in 1868, making them one of the oldest football clubs in England.  They once played in front of over 100,000 in the FA Amateur Cup Final against Walthamstow at Wembley stadium in 1952, and more recently have been embroiled in some controversy as the club had to go to the High Court to gets its name back after it was lost in a mire of mergers.  Last season the club hit the headlines for all of the wrong reasons as their chairman was jailed for his part in a VAT fraud (not related to the club).

And on the subject of chairman, what about Greenwich Borough’s?  The original South London cheeky chappy Danny Dyer.  and not only that – Tamer Hassan, his co-star in The Football Factory and The Business is also involved in the club, although I have to say I didn’t see him on the sidelines in his role of Player/Manager, but after speaking to his agent (no, really I rang his agent on the off chance) I found out he was in Detroit, filming with Richard Gere.  The motor city or New Eltham – tough choice eh.

With this in mind I was disappointed that we didn’t see any “antics” as we had done in the Football Factory.  What we did see though was a blinder of a game.  End to end, competitive (a bit too much for the referee who had to warn both managers to cool their teams down).  In the first half we had two goals, a missed penalty and the woodwork struck on three occasions.  All played out with the bloody orange ball.  Why?  It’s July not snowy January, the grass is green not white, and it is 3pm not 11pm.  So why do we need an orange ball?  It’s a big bug bear for me this whole ball colour thing and has been discussed at length before here.

So with all this excitement did the game disappoint?  Not in the slightest.  Leyton should have gone into the lead early in the game when they were awarded a fortunate penalty, but the Greenwich keeper made a brilliant save, punching the ball up in the air and then getting a fortunate bounce as the ball came down on the line and spun away.  No need for goal line technology here FIFA.

Ten minutes later and we had the first goal.  Greenwich had already hit the post and the bar before a well floated corner was powered into the net by their centre back, despite the efforts of the keeper and the defender on the line.

The lead lasted all of a minute as Leyton played the ball wide from the restart and their impressive right winger cut inside and hit an unstoppable shop from all of thirty yards into the top corner.  Whilst the Leyton player (number 7 Ebeneezer as I come to understand from the comments of his manager on the touchline) was impressive, he lost his cool on a number of occasions and had a monumental lecture from the referee at one point, telling him “One word, just one more word whether it be please, thank you or f@ck you will be off my son”.  Classic lecture.

Unsurprisingly the second half saw mass substitutions.  Leyton not only changed their whole team, but they changed their kit, taking the field in their away kit.  Greenwich were the better team without a doubt.  Word had reached us of a cracker of a game unfolding in Cape Town and so I apologise now for the fact that we literally got on our bikes and headed off home just in time to see the 2nd (and 3rd and 4th) goals go in in South Africa.  So I bet you want to know what the final score was now in the game at Stadium EDF?  Well I cannot tell you!  Try as I might to find it somewhere on the internet or on a website I simply cannot.  Any of the other dozen of so fans out there could help me out here? If not then you will all have to suffer in silence.

So game one (well 5/8ths of a game) under our belts for 2010/11 and it could not be closer to home.  and who knows what might come off the back of the game?  An interview with a holiday star perhaps?  Or just more sunburn!

More photos can be found here.