“You can never have enough heads”, so Worzel Gummidge once said and nothing could be closer to the truth than the roles I currently have at Lewes.  Director, co-website editor, co-programme editor and post-match interviewer. But I wouldn’t change them for the world.  We all have numerous roles at the board level, all unpaid and all done because we love the club. But this season I have taken on a new role.

In his recent book, the Nowhere Men, author Michael Calvin explores the role that scouts play in modern football.  These incredibly poorly paid, dedicated people see hundreds of games a season, often being paid no more than expenses, to try to find the next “Wayne Rooney”.  The book, one of the finest I have read in the past year, details Calvin’s interactions with the unseen, unheard of, secret layer of football. The Scouting network.  Whether it is trying to spot the next Rooney (Wayne rather than his cousin John) before anyone else, or trying to spot a weaknesses in the way a centre-back reads the game, a scout’s success or failure can often be a margin call, a gamble or even a gut feeling.

Tonight I have joined the Nowhere Men at Carshalton Athletic versus Dulwich Hamlet.  Whilst most football fans will be sitting comfortably at home, beer in hand, watching Olympiakos versus Manchester United, I am at The War Memorial Ground , struggling to see what I am writing in the darkness of the main stand, as I compile a scouting report on our forthcoming opponents.  With the information fresh in my head I will burn the midnight candle to get my observations onto a formal report before sending off to our management team.

It has come to something when I now get a formal nod of respect from others who tread this lonely path.  I made by scouting debut some years ago, but it wasn’t until this season that it become a regular gig.  I now look after “Scouting operations” in Kent, London and Essex.  Sounds flash, eh?  Well it is a self-awarded title but one I am proud of.  Essentially whenever I have a spare evening (or a Saturday as has been the case all too often this winter) and one of our opponents are within an hour’s drive I will be there, huddled in my big coat trying to work out if the right back really is right-footed at all and whether the centre-midfielder is really a holding player or simply unfit.  With every game you watch, you learn more about the game, more about how players minds work and more about the vulnerabilities and weaknesses each team has. And how desperate we all are at this level to pretend we are really making a difference. END_OF_DOCUMENT_TOKEN_TO_BE_REPLACED

Despite the fact we conceded two goals in 45 injury-time seconds against ten men on Saturday, Non League Day was once again a success. Our previous experience in hosting a game on NLD was four years ago when Hampton & Richmond Borough came to visit in our Conference South days. Seven hundred and eight eight fans saw the game on Saturday, the highest crowd in the Ryman Premier League this season (bar Maidstone United), up 48% on our last Saturday home game against Canvey Island. Across the Ryman Premier League every club who played at home on Saturday saw a rise in attendances from a normal Saturday. Hornchurch up by 50%, Bury Town up by 60% and even Cray Wanderers saw a 25% rise. 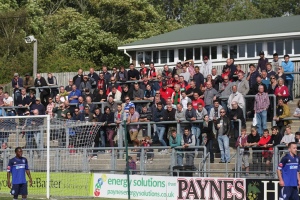 But Non League is for life and not just for one day when the Premier League players are on the piss in Marbella. So the big test would be how many fans would come back to games this week when the temptation of England’s latest borefest would be on the TV. Last season, the average attendance at the Pan was 542 and this year the first Tuesday game had seen 532 come through the gates, with the average already over 650. There isn’t much more we can do to get our message across in the media. Last week we saw the cameras from Sky Sports News come to the Pan to get an insight into how we have bounced back, in true Partridge-style, from the brink of Non-League extinction as well as the Guardian once again issuing a rally call to come and watch the Rooks. As one of my more media-savvy fans said to me over a few beers last Christmas, “For a club of your modest size, you get a fucking ridiculous amount of attention from the lovely-doveys, don’t you.” But grass-roots football is all about sustainability to steal the latest post-Olympic buzz word. To clubs like Lewes that means becoming a bigger part in the local community. That is where the fans of tomorrow will come from.

Few football clubs really understand the need to recruit new fans these days. Encouraging young fans to come to games means that they will bring along their parent(s) and spend money over the bar and in the club shop. Make the entry point affordable, or even free as with the case for many clubs in the Non-Leagues, then slowly they will return time and time again. Football is in competition with other leisure activities on a Saturday afternoon yet some football clubs still simply see all fans, irrespective of age, as cash machines. The concept of affordabilty and value has simply never been considered by many clubs. END_OF_DOCUMENT_TOKEN_TO_BE_REPLACED

It had been quite a good few weeks for the Rooks. Results on the pitch had been poor – in fact we were bottom of the current form table – six defeats from the last six games had brought Mr Relegation sniffing around our front door and our chance of a home win against Margate (and a chance to see match ball sponsor Luge Pravda lead the teams out in his PE kit) were dashed by the freak snow that hit East Sussex, cancelling the game for the second time in 2013. 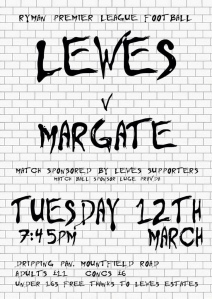 But a football club is not just for Christmas, it’s forever and so our job as Directors is to build a sustainable club on and off the pitch. We are all 100% behind Simon Wormull (oh God, that sounds like a dreaded vote of confidence! Sorry Simon!) and believe that the team will comfortably avoid the bottom two. So it was positive to see our fantastic match posters get some of the press they have deserved. Both Proworx and East Web have a done a sterling job in recent years as designers, under the guidance of the likes of club Directors Charlie Dobres, Ben Ward and Patrick Marber (see the set here) and this week the national press came calling. BBC local news, Freund11 in Germany, MSN, Yahoo!, The Independent, The Sunday Times, heck even the Daily Mail got in on the act (although their interpretation of the facts still leaves a lot to be desired). Fine praise indeed, and it felt like the world and his wife were now following our results.

So after we put away our Kiss-Me-Quick hats from the Margate postponement, I looked forward to a short trip on the bus to Cray Wanderers for a relegation six pointer. After a morning of stripping (window ledges rather than with the employees of FYEO alas) CMF approved my efforts in the “Husband” department and sent me off to the bus stop, packed lunch and Thermos (you should always write that with a capital T as it is a brand and not an item – just like Hoover, Portakabin and Airtight), slipping my bus fare in my pocket and telling me to be home by 6pm. Alas, just as I set foot out of the door, Mr. Monsoon paid South East London a visit and another game fell by the wayside. 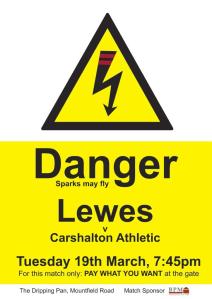 So roll on 80 hours and we were back at the Pan. If Cray Wanderers was a six pointer, then the visit of bottom of the table Carshalton Athletic was a twenty-four pointer. Of course, this wasn’t the first time Carshalton had come to visit us. Just a few weeks ago they arrived in town, had a player sent off after less than 100 seconds, found themselves two goals down and then lost their manager all in the first half. As the teams headed for the dressing room the power to the Pan failed and despite us all holding up our mobile phones, the referee deemed it wasn’t enough so the game was abandoned. END_OF_DOCUMENT_TOKEN_TO_BE_REPLACED

Peters and Lee, Strawberries and Cream, Katie Price and anyone….Classic partnerships that all the family know and love. For us blokes we could throw in the likes of Pamela and Anderson or Natalia and Velez (what do you mean who??? HER!)…but there is one partnership that rises above all others. Football and pies. Let’s face it, if it wasn’t for those two, we wouldn’t be able to sing “Who ate all the pies” to any visiting keeper. We wouldn’t have had the marvellous book 92 Pies by occasional Lewes FC visitor Tom Dickinson and every weekend we would go hungry at the game.

We are especially proud of the match day experience at Lewes FC. We do not have luxurious surroundings like a Premier League club, but we have heart. A team of unpaid fans are constantly trying to pushing the envelope with new ideas that are rarely seen at football. But pies aren’t new are they? True. But few clubs are able to boast their own brand of savoury delights.

In celebration of National Pie Week, Lewes were planning on launching their own range of RookPies at the game against Carshalton Athletic. Take your pick from Steak and Harveys (of course, Harveys), Chicken and Leek, Chicken Tikka or a special vegetarian Homity variety. All served by some fans in their finest black and red striped outfits wandering amongst the good and the great of the Dripping Pan. Ideas formulate quickly and the club are already looking at ways to use social media for pie consumption. Tweet @rookpies with your name and location #chickenandleek and within minutes a steaming hot pastry delight can be yours. END_OF_DOCUMENT_TOKEN_TO_BE_REPLACED

Through a combination of the Ryman Premier’s fixture scheduling and the famous FA Cup balls, the legend that is James Boyes was facing a football-less Saturday a few weeks ago.  He dealt with it like a true football-loving man that he is.

There was no football on….no game I could go to. But it was Non-League Day. 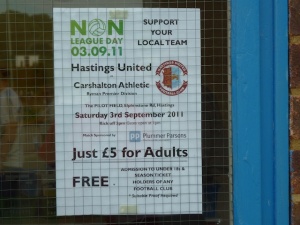 My team, Lewes, were due to play away against Hendon in the Ryman Prem who ground share with Wembley at Vale Farm. However Wembley were drawn against Ardley United in the FA Cup and despite looking at a Friday fixture or a Saturday double-header, the league game was moved to Sunday.

So, the choice was mine. I could take the afternoon off, spend it with the family, do some gardening or go shopping. But instead I opted for a trip east to Hastings United. END_OF_DOCUMENT_TOKEN_TO_BE_REPLACED

The Ball is Round
Create a free website or blog at WordPress.com.