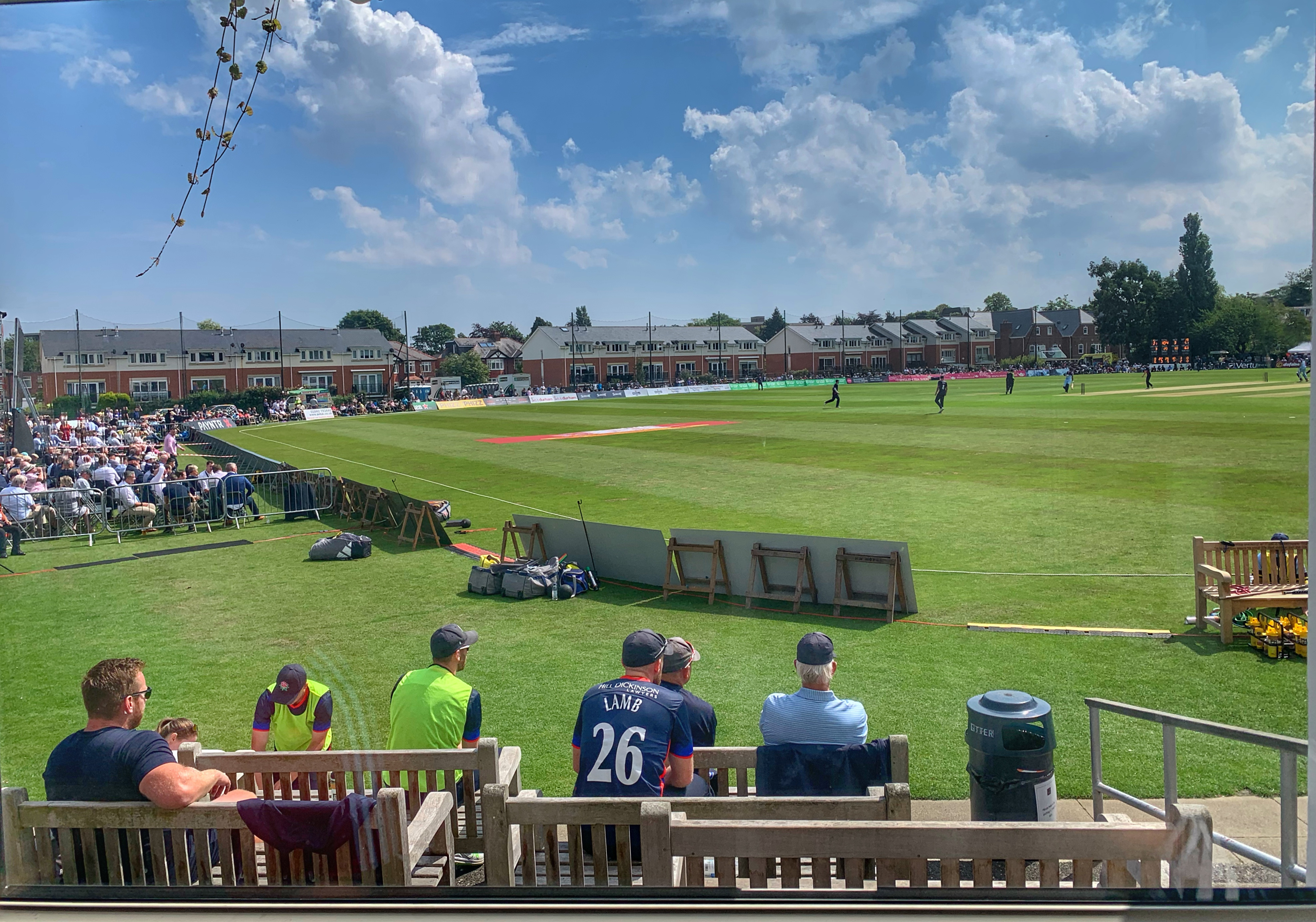 In any quest there will be challenges, outliers or simply going to the extreme. Before today I had managed to see cricket at 16 of the 18 County Grounds. I had been en-route to Riverside, home of Durham Cricket back at the start of July but a late call from Yorkshire’s ticket office saw me divert to the Roses T20 match at Headingly. Ironically, my one and only trip to The Riverside this season will be so see Yorkshire play Sussex in the T20 quarter-finals in a few weeks, with Headingly being used for the Test Match against India.

With the season starting to wind down, opportunities to watch the newest county championship side this season were diminishing. It’s not like you can just pop in to watch Durham after work in London. But 18 months of not being able to spend the years of air and train miles collected through work trips were burning a hole in my digital pocket and so I took the opportunity to see Durham’s one and only trip to Tyne & Wear this season.

Of course it’s not quite County Durham, sitting in the heart of Northumberland, but then against they will also play at Scarborough in a few weeks. Did anyone care? Absolutely not, as once again we were treated to a superb day of 50-over cricket.

It would have been sensible of course, to get the train to Newcastle but that was ridiculously expensive, requiring an overnight stay or a very early departure from London. So I flew. Most sensible people would have flown to Newcastle – it has a decent-sized airport and there are flights from London but that would have been too sensible. So instead I found myself on a 7am departure from London City to Edinburgh. 8.15am arrival, bus to Waverley station and then the 09:30 to London, with the second stop being Newcastle. Metro to South Gosforth and here I was, six and a half hours after leaving home, with a journey that had cost me 50p.

I’ve been to a few out-ground games. Some have been sparsely attended such as Northwood and Cheltenham but others like at Guildford and Beckenham had been busy. I think that unless you arrived at the South Northumberland Cricket Ground by 9.30am you would not have got a seat or a space anywhere near the boundary rope.

Hemmed in on three sides by housing, there wasn’t much room for many rows of spectators around the perimeter and the locals had come out in force to watch one of the best batting sides in the fifty over game. The ground is basic in terms of facilities, with a small bar that looks out over the area in front of the changing rooms, a couple of refreshment tents and then a massive area for corporate entertainment at the north end of the ground, where the ratio of watching cricket to drinking Prosecco was approximately 34:1.

The game had sold out, with a chalk board outside saying “Sorry No Walkins!!!”. Thankfully, next door to the entrance of the ground was a Wetherspoons that was welcoming any waifs and strays.

Lancashire won the toss and put the hosts into bat. Did they see Clark and Lees at Beckenham a few weeks ago and the damage they caused? Obviously not because the two openers looked put build runs quickly, scoring at 6 an over before Clark fell LBW to Bailey. Skipper Borthwick lasted just three balls before a direct hit from extra cover ran him out.

With no space to call home, I headed to the bar and found a corner with one of the best views in the house. From there I saw the preparation of the next batsmen, the intricacies of what goes on whilst the game is progressing and the amount of food the non-batting batsmen eat. Dickson looked nervous, unable to sit down waiting for a wicket to fall so he could go into bat.

Lees finally for 59, swiftly followed by Bedingham who made 60 and at that point with the score at 171-6 with 17 overs to go it looked like the innings may peter out. In the bar the talk wasn’t of the Lancashire attack but the namby-pamby sportsmen of today.

One elderly chap was very disappointed that Ben Stokes wasn’t playing for Durham. “Mental Illness – it’s all in his head” (he wasn’t joking when he said that). “What he needs, and any of those softy England footballers, is to go down the pits for a few days. That’ll sort out the men from the boys”.

The bar had almost fallen silent, listening to his unbelievable statements. He said that Tom Finney and Stanley Matthews were real men’s men, who would play for free in today’s Premier League and still do a shift down the mine (he was obsessed with mining). Thankfully, he was gently escorted out of the bar by someone in his party before he could do more damage. But not before all our attention was grabbed by someone, with an earnest attempt to change the conversation, who said “if you could only eat one crisp for the rest of your life, was there any one better than a Beef Hula-Hoop?” Bold statement and one that got everyone talking for awhile.

Back on the pitch Durham had steadied the ship and Dickson, now he was in the middle, and Doneathy were building a decent partnership. Both hit their half-centuries at the same time, then with the overs running out they were scoring at eight an over. Balls were flying out of the ground at regular intervals, much to the delight of the home crowd. With an over to go, and Dickson still eight runs short of a century, it seemed he would be out of luck. But Donearthy gave him the strike and he took 11 off the final few balls to complete a superb hundred. Durham ended their innings on 327-6, with the seventh wicket partnership worth 156, including ten sixes and twelve fours, Donearthy remaining unbeaten on sixty nine.

The between innings break saw an over of fans (is that what you call a group of cricket fans?) head across the road to Wetherspoons whilst the Lancashire team were being grilled for some shoddy fielding that had seem them put down three very easy catches. The message seemed to sink in as they started their innings confidently, with Wells and Bohannon trying to keep the run rate above the six an over mark. But after the former’s wicket, their response came off the rails.

An eighty run partnership for the fourth wicket gave the small band of travelling fans hope but as soon as Lavelle and then Jones departed, it was the beginning of the end. 203-5 after 37 overs to 241 all out seven overs later. It was a poor performance all round from Lancashire who had hopes of a place in the knock-out phases before arriving in Newcastle.

Not that the hospitality guests even noticed the game was over, let alone it had restarted after lunch. They were still quaffing outside long after the players had retired to the bar, and as I left the ground groups were heading off to take in the bright lights of Jesmond.

It may be a four hour journey home on the train but with almost every other game rain-affected in England, once again the Royal London Group had come up trumps for me.