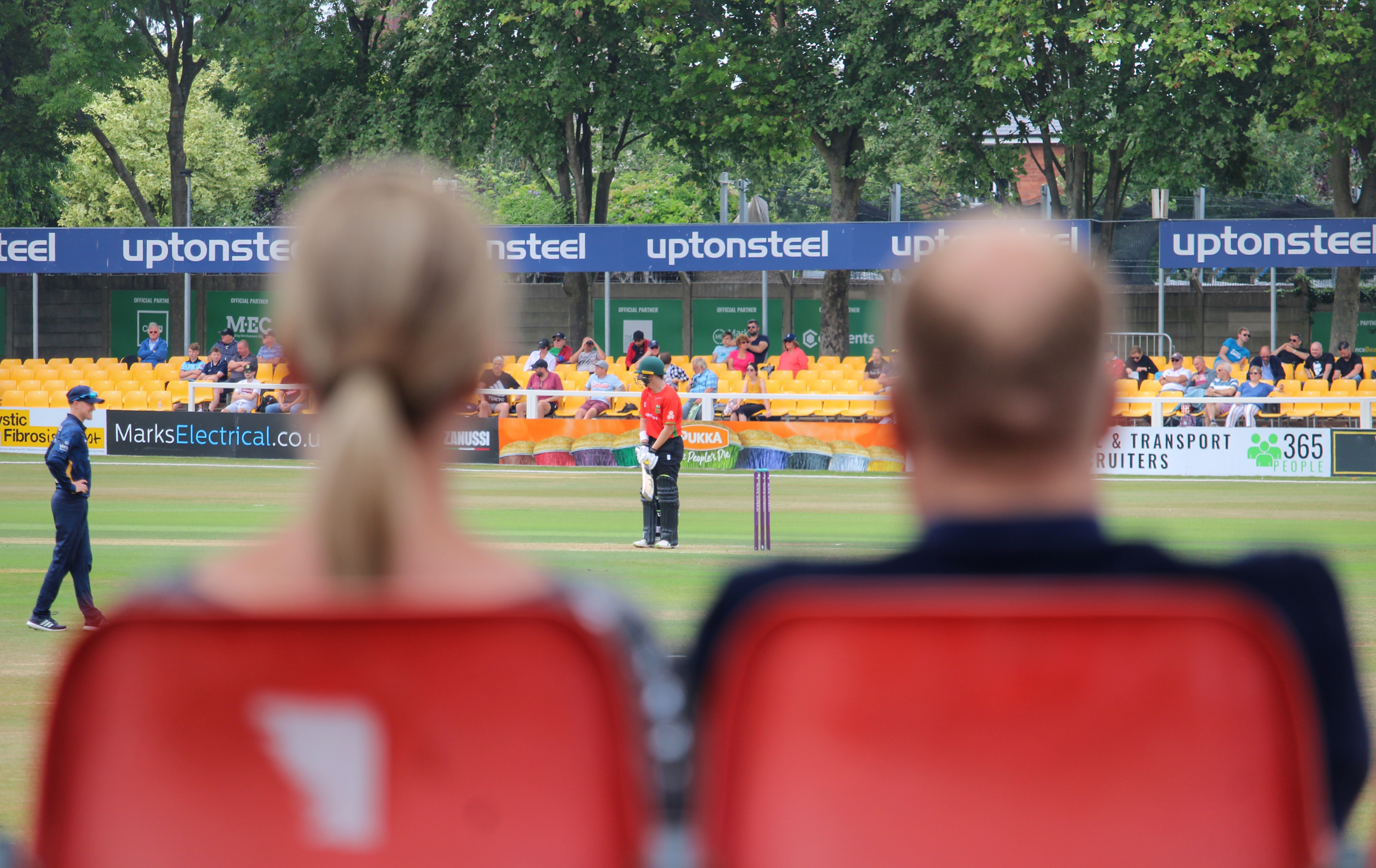 There’s a club that football fans can join if they have been to a competitive game at every one of the 92 Premier and Football League grounds. Called, unsurprisingly, the 92 Club, there’s a list of criteria that determines whether a particular game is “valid” enough to count, which to the formal purists keeps the tyre-kickers out. To me it’s simple – attend a game, at the ground and you’ve visited. Tick.

But there’s not an equivalent club for first class county cricket and if there was, I’d be sending off my application after the visit to Grace Road/The Upton Steel County Ground in Leicester. There’d been a few aborted attempts in the last couple of months, and the initial weather forecasts were poor but here I was, sitting in the ground with the sun shining and a beer in hand before midday. That’s worth a double tick in anyone’s book.

Despite there being two Hundred games taking place on what they were calling “Super Sunday” (hmm, I may be wrong but I think that slogan may have been used before somewhere), the Royal London Cup was carrying on regardless with 8 games being played. What was even more remarkable was that with such appalling weather in the South of England, only the game at Hove didn’t provide a result, abandoned before a ball was bowled.

It’s early days in the competition but with three sides from each group progressing and factoring in for poor weather, four wins from the eight games could be enough to reach the quarter-final stage. Hundred or no Hundred, the Royal London Cup offers the best opportunity for any county side to win a major trophy in the domestic season and having witnessed the run-fest at Beckenham last week, expectations were high for both sides on what appeared to be a batting wicket.

It wasn’t a big or noisy crowd in at Grace Road but they were certainly appreciative of some excellent individual batting performances with over 650 runs scored, three centurions and one further player ending the innings 90 not out.

Grace Road doesn’t have the formality of the bigger county grounds – I’d put it in the same bracket as Northampton – surrounded by housing on all sides, with perfect viewing angles on all sides with an appreciative crowd and one where having forty winks after lunch won’t get you drowned in beer, or sporting creative writing on your head.

I snagged a double bench to myself, working out that in the early afternoon it could well be converted into a chez lounge for a power nap. The home side won the toss and decided to bat first. Rhodes hit two fours in the first four balls of the innings and was then clean bowled by Waite. T20-style batting won’t win many friends in the 50 overs game. Patel was the second man out when the score was on 49, the home side jogging along around 5 an over. Nothing much to note and on course for a par 250 score.

But the partnership between Marcus Harris and Lewis Hill most definitely wasn’t ordinary. The two Leicestershire batsmen put on 212 in just over 30 overs, Harris punching the air when he reached his century, eventually falling for 127 off 130 balls, whilst at the other end Hill finally fell for 108, caught in the deep. A late flurry of boundaries and wickets saw the interest levels kept high as lunch approached, finishing on 327-7 with Matthew Waite the pick of the Yorkshire bowlers, finishing on 5-59 from his 8 overs.

Any score of 300+ is a decent run chase in the 50 over game and Yorkshire started strongly, with Will Fraine on course for a double-quick half century before he was caught by Hill for 45 with the score on 61 in the 10th over. Ballance and Duke kept the score slightly above the required rate before Ballance fell for 45, with Yorkshire needing 180 off 27 overs. But there were no further dramas as the royally named Harry and George (Duke and Hill) saw Yorkshire to the brink of victory with a superb 172 run partnership. Duke and Tattersall guided the visitor’s home with two overs to spare and a comprehensive victory for Yorkshire.

That’s two RLC cup games in a few days, with a total of 1,400 runs scored. Whilst The Hundred is billed as cricket with added entertainment, can you really go wrong with the county game, at its finest on days like today? I don’t think so.