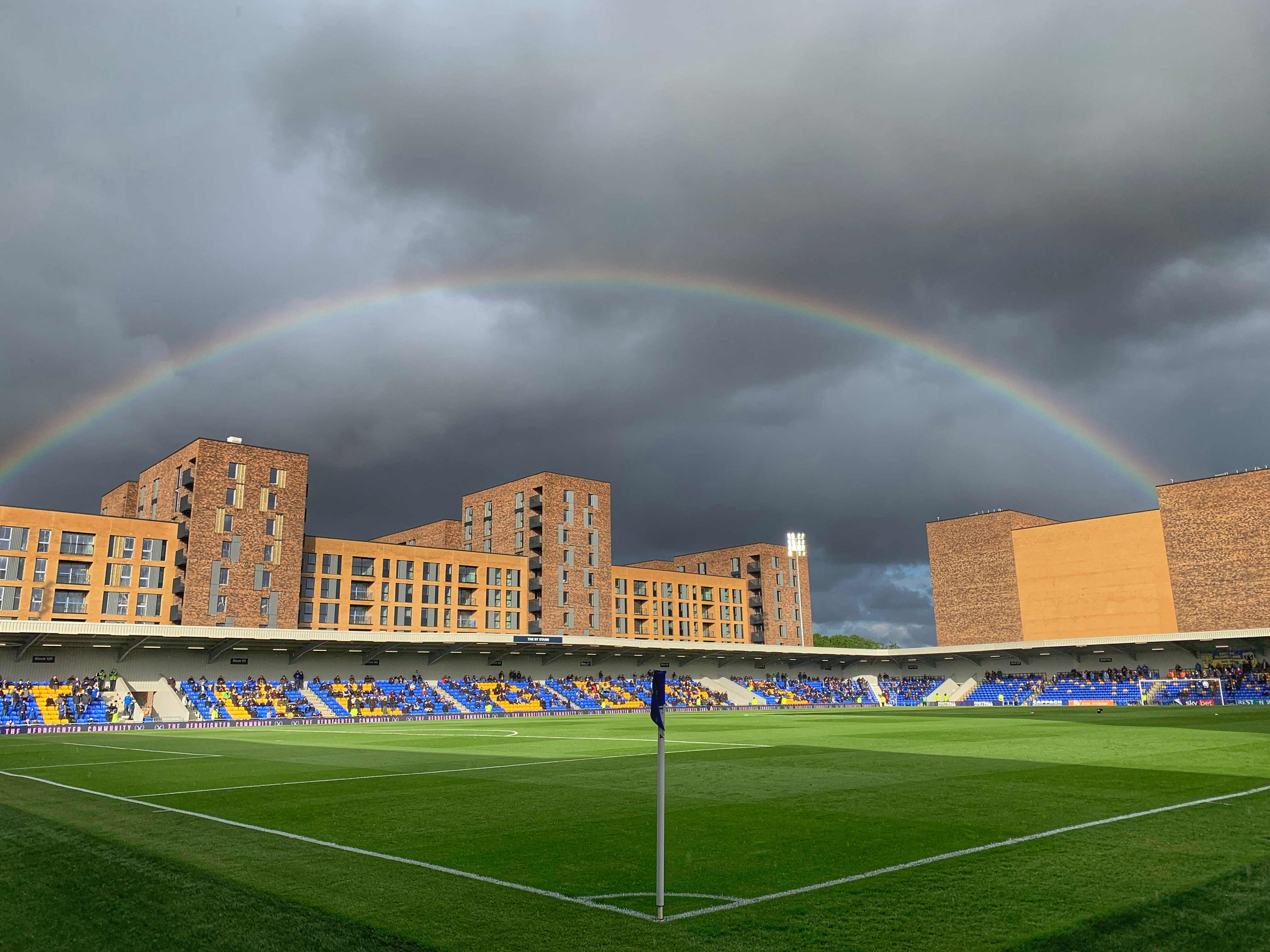 “We are home”….An AFC Wimbledon fan sprints to the exterior wall of the stand as I pass him and he plants a kiss on the concrete. It isn’t just the relief of finally being able to watch a game of football in the flesh, but returning home after decades away. Whilst the stadium had been hosting football for some months, tonight was the first opportunity for a small number of AFC Wimbledon fans to experience it for themselves.

In some respects, the timing had worked out for The Dons, being able to move into the new stadium whilst fans couldn’t attend. Naturally, every club would have wanted to play in front of fans, but without them it meant for AFC Wimbledon they could continue to build the stadium around the match day. Whilst the building work continues at a pace around the exterior of the new ground, come the start of the 2021/22 season and it will look a very different place.

In preparation for the expanded return of fans next season (finger’s crossed!), this was a ramp-up event with only a limited number of fans (2,000) able to attend. It was always going to be a bitter-sweet evening. Sweet for those who were lucky enough to get a ticket, bitter for those equally loyal fans who couldn’t. But in the fullness of time, all of the fans will be back and this game will become secondary (notable point of interest – the first game played back at the redeveloped Wembley Stadium was an England U21s game, played on the same day as the national side were playing in Estonia).

The welcome we received at the stadium was certainly warm and friendly, compensating for the torrential rain that had driven some fans into the Corner Pin pub, a firm favourite from the days when Plough Lane was a ramshackle intimate venue that took more than its fair share of big scalps. And talking of scalps, the Liverpool side were never let to forget THAT day in May 1988 as they warmed up in front of the main stand.

The stewards did an excellent job, patiently answering the same question dozens of times, trying to make sure that the fans who arrived early were sheltered from the at times horizontal rain and efficiently guiding the fans out at the end. This wasn’t the time or the event for stress-testing the food, the drink, the commemorative match programme or the club shop – it was one to get everyone familiar with one-way systems, social distancing in a crowd and making sure everyone followed the rules.

That being said, the rain and the Covid measures never damped the spirt of the crowd, who rose to a man to welcome the AFC Wimbledon team onto the pitch. There was some Isthmian League interest with former Kingstonian striker Cori Andrews on the bench, ultimately coming on to replace A Trialist, who I can reveal (and sorry if I am not allowed to), Aaron Cosgrave, who had been a Lewes player up until the season ended, playing his last game for the Rooks in our 3-1 defeat in similar conditions at Lowestoft Town on the 31st October.

The performance, and ultimately, the result were less important than the event as a whole but for the record AFC Wimbledon took the lead in the 6th minute when Callum Reilly slotted home as the Liverpool players stood around with their hands held high, appealing for a decision that was never coming. The Reds, as you would expect, dominated most of the first half, scoring two goals in quick successful, the second from the highly rated 16-year old Kaide Gordon, who added a third just after the break.

As an owner (one of 1,600) of a fan-owned club a few steps down the pyramid, the stadium is a remarkable achievement. Lewes were never lucky enough to play Wimbledon as they moved through the leagues after their rebirth in 2002, passing each other as one team went up, the other down but it is inspirational as to what they have achieved. With a significant nod in the direction of the greedy big six, one fan was quoted as saying “Never let anyone tell you fans can’t run a football club. This is a statement that highlights the force of fan power”.

Chief Executive Joe Palmer received confirmation the morning after the game that the authorities had been impressed with how the club had managed the game and they had been granted the all-important safety certificate they need to be able to have up to 25% capacity from now on. In the grand scheme of things a piece of paper doesn’t mean much, but in the road back home for the Dons is is a massive step, one that every football fan will applaud.