Another day of our looking back without anger..This story is one for all West Ham fans to remember and pull from their sleeves when other fans start asking what we have won….

I like to think I know the history of West Ham quite well.  When I was younger I poured over statistics, history books and programmes to learn the managers, the players and the key games in their history.  I knew all about the War Cup victory, the FA Cup Final appearances of 1923 and 1964, the European Cup Winners Cup campaigns of 1965, 1966 and of course 1976.  I was lucky enough to experience the “golden” age of 1980 to 1986 first hand, and once touched the Intertoto Cup we won in 2000. But last week whilst researching Czech Republic football for a new project (coming to your bookshelves in 2013) I came across the International Soccer League which ran from 1960 to 1965.  When I looked at the winners of the trophy during that five-year period I was stunned.  Back in 1963 the Hammers became the first, and only English team to win the trophy.

I always look forward to my work trips to New York.  It is a chance to experience one of the greatest cities in the world, and often to get a slice of sport, US-style.  Unfortunately my timings this week meant that there was no sporting action on the agenda.  The MLS was about to kick off the 2013 season, Baseball was a month off and the NBA is dullsville.  ut over dinner at Swine (vegetarians look away now) I heard an amazing story about a little known football tournament from 50 years ago.  And apparently, West Ham had been a household name in these parts.

I can see you scratching your head, assuming that this was some random one-off game played between small clubs at the start of the season.  But you would be very very wrong. The tournament was created by a wealthy US Businessman called William Cox who saw an opportunity to bring international football sides to the US to play local sides in more than just exhibition games.  The politics of American Soccer at the time meant that its format was never rigid and was often complicated, but was ultimately a success.  In fact, the creation of the North American Soccer League in 1969 and the import of marquee players was in part due to the success of the tournament.

In its first season in 1960 Cox managed to convince some of the biggest names in European football to play.  The concept was that the ISL was divided into two “sections” formed of six teams played at different times during the close season.  The winners of the two sections then met each other in the final.  Bayern Munich, Nice, Glenavon, Burnley and Kilmarnock competed with the New York Americans in a round-robin tournament played within New York State.  The Scots shocked everyone by winning Section 1 and eventually went on to meet Bangu, from Brazil who had topped a group featuring Red Star Belgrade, Sampdoria, Sporting Lisbon, Norrköping and Rapid Vienna.  Unsurprisingly, the Brazilians took the first ISL title by beating the Scots 2-0 at The Polo Grounds (there is even video of the game here).

The following year the tournament was expanded to feature eight teams in each section with Everton winning six out of seven games against Bangu, New York, Karlsruhe, Kilmarnock, Montreal, Dinamo Bucharest and Besiktas before losing in the final to Dukla Prague 9-2 on aggregate.  Such was the interest within North America that half of the games were played in Canada.

In 1962 the organisers decided to add in the American Challenge Cup, pitting the season winners against the previous years champions.  The only British team to enter in this year was Dundee who finished fifth in a group won by eventual champions America RJ from Brazil.  They then faced 1961 winners Dukla Prague over two legs in New York, losing to the Czech’s 3-2. 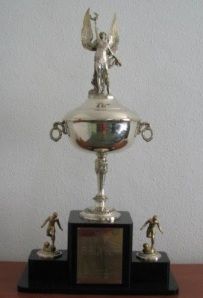 But in 1963 it was the turn of the Hammers to take part, accepting an invite from the organisers to play in Section I along with the Italians Mantova, Kilmarnock, Recife from Brazil, Preussen Munster, Deportivo Oro from Mexico and France’s Valenciennes.  With Bobby Moore leading the side, the Hammers topped the group in one of the tightest competitions yet, with just four points separating all seven teams.  They went forward to play Section II winners Gornik Zabrze from Poland and beat the Poles 2-1 on aggregate on Randalls Island to claim the title as well as Moore being named the tournament’s “MVP”, winning the Eisenhower Trophy, and Geoff Hurst the tournament’s leading scorer with eight goals.

The following year the tournament had a number of drop-outs, reduced from fourteen sides to just ten, with Polish side Zaglebie Sosnowiec beating Werder Bremen to win the trophy, although the Hammers decided not to compete for the American Challenge Cup, passing the honour instead to 1963 runners-up Dukla Prague who beat the Poles 4-2 over two legs in New York.

The final year of the tournament was in 1965 and the Hammers were back, fresh from winning the European Cup Winners Cup against 1860 Munich who they faced again in New York.  This time they finished bottom of Section 1 with the US team, New York Americans finally winning the group, although they had to settle for the runners-up spot after losing in the final to Polonia Bytom.

This was the last season of the ISL.  The United States Soccer Federation Association filed a law suit banning the “import” of any foreign teams to play in the competition, although Cox later won a court case to overturn the decision which led to the strange United Soccer Association League in 1967, but that one is for another day.  For now I am safe in the knowledge that West Ham have won ANOTHER tournament (to go along with the Intertoto Cup) that no other English team has.  And that will buy me plenty of ammunition in the office football banter wars.

The wonderful Pitch Invasion has a complete history of the tournament that can be read here.