It is a clear free-kick on the edge of the Inter Milan box.  25 yards out, dead centre and ten world-class players queueing up to create some magic.  86,000 fans wait expectantly.  The stadium all of a sudden lights up with tens of thousands of mobile phones, trained on the pitch, the owners of them choosing to view the incident through a small screen rather than with their own eyes.  Welcome to Modern Football. 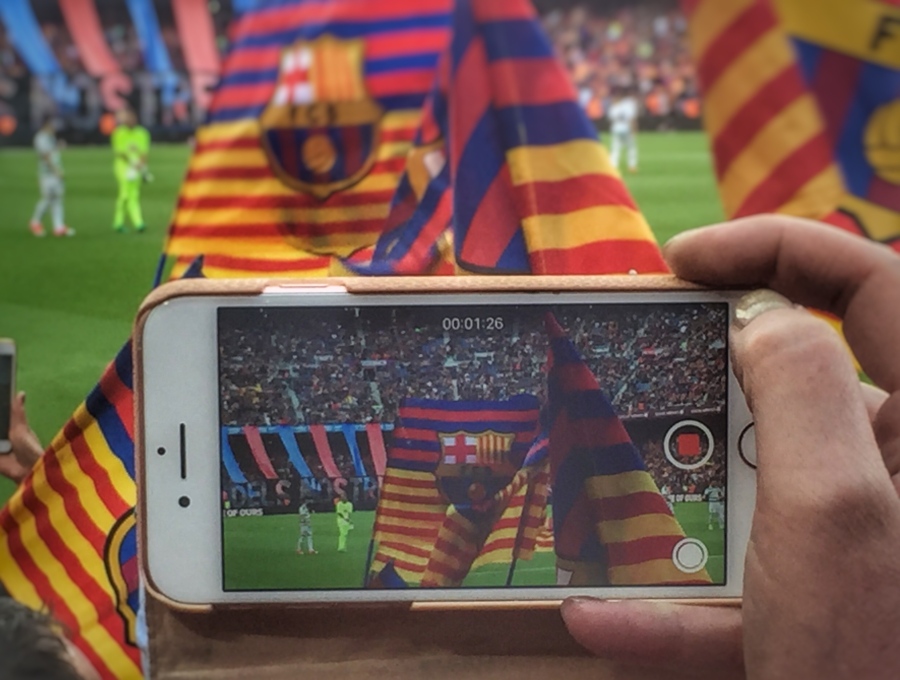 It was an opportunity that I couldn’t miss.  A major industry event in Barcelona coinciding with Barcelona’s Champions League tie against Inter Milan.  I wasn’t the only one who had the same idea and almost everyone I bumped into during the day around the conference centre mentioned they were heading to the Camp Nou for the game.

For many of them, especially our cousins from across the Atlantic, would be attending their first ever game.  For me it was Charlton Athletic versus Burnley at a decaying Valley back in 1974, so a visit to Europe’s biggest stadium isn’t a bad way to lose your cherry.

For the club, European games are a gold-mine for the club.  With season tickets not valid for these games, it is all pay and with so much demand for seats, the club set the price high….eye-watering, vertigo-inducing high.  By the time I bought my ticket I paid €109 for a place in the top tier, almost closer to the stars than the gutter. 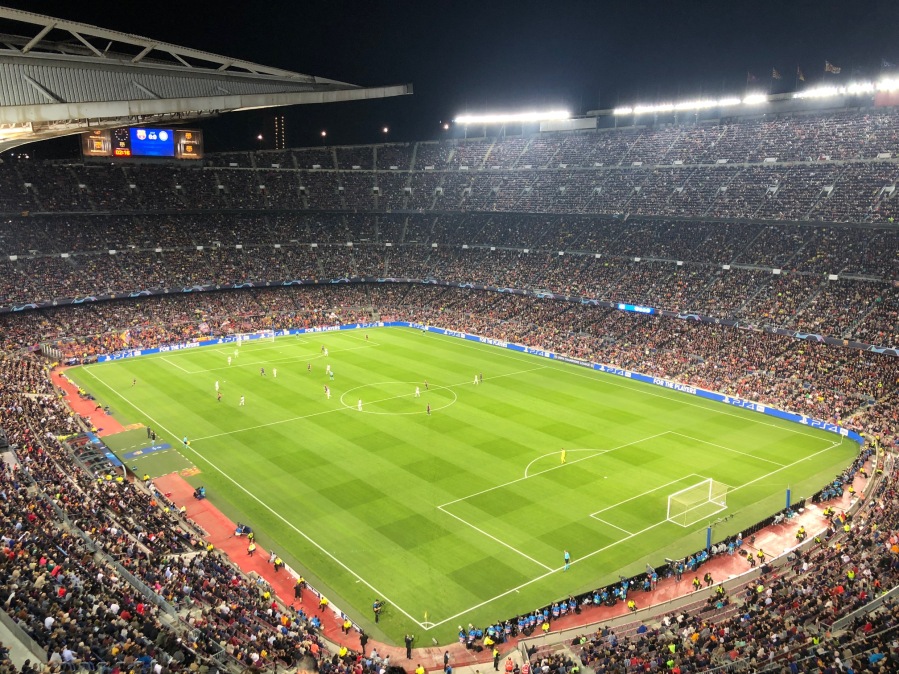 As you climb up towards the Gods you see that the Camp Nou is far from a world-class stadium behind the veneer.  The stairwells are cramped and show their age – some parts of the stadium haven’t been touched since 1982.  Whilst there are plans in place for an upgrade and expansion of the stadium in the near future, today it is light-years away from the image of the club on the pitch.  At half-time fans have to queue on stairways to get a drink or something to eat, with the narrow concourses dangerously overcrowded.

The seating areas are basic to say the least.  Seats exposed to the hot Catalan sunshine have faded over time, offer little leg-room and are exposed to the elements.  It’s hardly any different to the San Siro, the Stade de France or Stadio Olimpico.  But few who visit care, they are here to watch the magic on the pitch..in theory.

I took my seat just as the teams came out on the pitch.  My first sign of the demographic of the fans around me was when the club anthem, Cant del Barca, fired up.  All around me the phones came out, videoing the scene.

The couple in front of me settled down for the next 90 minutes.  Each of them had a carton of popcorn and got their phones out.  As the game started he pressed the record button on his phone, she fired up her Netflix app and started watching ‘The Good Place”.  Welcome to the world of the Modern Football Fan.

Resplendent in their £70 shirts (or £99 if you want the ‘vapour’ version whatever that is) and half/half scarves, they are the perfect fans for Barca.  Spending close to £500 on a single visit to the Camp Nou is what Modern Football is all about.  Popcorn-eating, Netflix-watching fans who actually don’t care what happens on the pitch but have at least Instagramed their visit and ticked off another tourist destination.

The free-kick in question caused quite a stir.  Not for the quality of the strike but for the tactic used by the visitors in laying a player on the floor to stop the genius of a free-kick hit low to take advantage of the jumping wall.  The fan in front captured the moment on his phone and replayed the moment first to himself and then to his non-interested girlfriend, missing the resulting corner and goal-line clearance.

I’m sure my neighbours aren’t unique either in the Camp Nou or in most other major stadiums in Europe.  The huge increase in commercial and TV revenues now means major clubs and their stars are as big as movie stars, and people are prepared to pay top dollar to watch them.  That means clubs are prepared to price-out some of their traditional, loyal fans who turn up close to kick-off, don’t spend in the club shop or overpriced concessions stands.  Unfortunately, that is Modern Football.

As a self-appointed Football Tourist I have nothing against the sentiment of travelling around the world to watch football, but that is what it should be – watching football.  Not watching football through a lens, or watching US hit TV shows.