Watching the great Dynamo Tblisi team of the early 1980’s is one of my foremost footballing memories.  This piece, written in March 2010 captured the trials and tribulations of “exotic” travel thirty five years ago.

We take travel today with a pinch of salt.  Budget airlines have opened up a world we would have never seen and thanks to this t’internet thing we can now get independent reviews, photos and even videos of hotels, bars and restaurants around the world all from the safety of our DFS sofa.  But can you remember what it was like to travel thirty years ago?  Sure you had your package deals with DanAir or British Caledonian, somehow managing to get off the ground and heading for the cultural high points of Majorca and the Costa Brava but what would it have been like to make a trip behind the Iron Curtain?

Having travelled a few times to the ex-Soviet states I know how hard it is today to get a visa, fill in the landing card and remember to keep enough dollars spare for the inevitable bribes for standing in the wrong place, or taking a picture of some government building.  Take this experience back to the early 1980’s when the Red Machine was in full effect and Russia was an almost closed country.  But football has always been a universal language, crossing even the most difficult borders and with three European football competitions every season it was inevitable that every so often our brave boys would have to experience a slice of life in the Eastern Bloc.

In March 1981 in the middle of their record-breaking promotion season, West Ham United headed off to Tblisi, capital of the Soviet region of Georgia to play the second leg of their European Cup Winners Cup Quarter Final.  It was never going to be an easy trip as Liverpool had found a few years before in the European Cup, but to go there on the back of a 4-1 defeat and just four days after a League Cup Final appearance at Wembley it was always going to be a tough trip.

But there is tough, and there is tough. Whilst the club had known that Tbilisi would be their opponents at this stage for some time, the winter break had made it almost impossible for the Hammers to find out much about their opponents before the home tie.  They had been given a brief scouting report by Waterford Town, who had played them in a previous round and Liverpool who had lost there in the European Cup the previous year suggested not to go at all!  The club found some help from unlikely sources.

The London Correspondent for TASS, the Soviet news agency had a friend who supported the club and managed to send over some videos of the team, plus a Swedish based journalist whose company had daily Russian newspapers was able to translate a few things relevant to the tie.  “Latin flair in lifestyle and play” he wrote on one memo to West Ham.  In the same report, published in the West Ham programme for the game that Russian football was not like our own game.  It was in fact much more controlled and regimented.  For instance, none of this playing for a draw every week – once a team had drawn 10 games in a season they simply got no more points from drawn games.  And penalties handed out to players were incredibly harsh.  A player who showed dissent to a referee could expect a 10 game ban, and feigning injury or time wasting a 3 game ban…..so what went wrong?

Most West Ham fans who turned up on Wednesday 4th March 1981 at Upton Park had never heard of any of the Russians and probably expected another easy home win, which they had become accustomed to during the season.  However, Tbilisi came to London with a squad full of class. Ten full Russian Internationals and four players who had represented their country at the Olympic Games the previous summer.  Included in this was Russian Football of the Year for 1978 Ramaz Shengelia, described in the match day programme as “fast and always on the move”, and the captain of the side, Aleksandr Chivadze.

At the time I was a promising young striker, happily banging in 4 or 5 goals a week at schoolboy level, but it is fair to say that on that March night I wanted to be like Chivadze from that moment on.  He had been voted Russian Player of the Year in 1980, beating Oleg Blokhin by some 80 votes from the Russian sports journalists and had become one of only a few footballers ever profiled by Pravda – the modern day equivalent of featuring in Tatler I would assume.  In a recent game against world champions Argentina, the world cup winning captain Daniel Pasarella had been quoted saying Chivadze would “grace any footballing nation”.  He was the best thing since sliced beetroot in the Soviet Union AND was clever to boot, studying for an Economics degree whilst playing for Dinamo.

It seemed that all attacks stemmed from Aleksandr bringing the ball out of defence.  He swayed past Trevor Brooking and rang rings around Alan Devonshire.  David “Psycho” Cross, at that moment the leading scorer in all of the English leagues may as well have been on a beach in Magaluf – he simply did not get a sniff out of Chivadze. 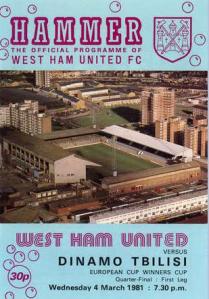 Chivadze opened the scoring in the game, starting and finishing a move that swept from one end of the pitch to another.  A second followed from Gutsaev before half time but the near 35,000 had seen enough to realise that the Hammer’s European adventure would go no further.  Cross pulled one back after the break but Shengelia added two more to put the Russians out of sight.  At full time, to a man the West Ham fans applauded Dinamo off the pitch, rubbing their eyes at what they had seen.

“I think West Ham underestimated us but even by our standards, that was a very special performance. We had 11 players playing at their best” said coach Nodar Achalkatsi after the game whilst John Lyall could only comment that “if you are going to lose then you want to lose to a team like Dinamo.”

Only a couple of journalists made the trip out to Georgia after the first leg result, giving the Hammers very little chance of overturning the 4-1 deficit and their brief reports simply focused on the 1-0 win rather than the trip itself. A few Hammers fans made the trip, and with their reputation preceding them were surrounded by hundreds of soldiers for their time in the Georgian capital. Very little was ever heard about their trip, but fortunately, West Ham’s Club Doctor, Dr Gordon Brill wrote a report for his diary.  Below is an extract, published in West Ham United’s official programme in April 1981:-

“In retrospect, we cannot be sure which (if either) reflected the true situation, because the 27-hour “outward bound” venture contained so many incidents that we were beginning to feel like James Bonds of soccer.

The almost incredible snags which interrupted schedules, frayed tempers and brought physical discomforts to many were eventually overcome thanks to the bonhomie and mutual co-operation of the 40-odd members of the official party.

Stories filtered out of the plight of our squad in Moscow Airport.  This included the fact that it took approximately one hour to obtain permission to leave a departure compound in order to visit the toilet some 20 yards away under the vigilant eye of four strategically placed guards, visibly equipped with walkie-talkies.  The rules were “go one by one, and the second cannot go until the first one comes back”.  It was just as well that during the preceding four hours at the immigration desks most of the party had only been able to grab a small beer or a coffee.

Eventually, after three passport checks of anything up to 15 minutes per person, and two close scrutinies of every piece of luggage it was decided that we should stay at a hotel overnight.  Fortunately permission was obtained for some food to be unloaded (after a specially convened doctor’s certificate was signed), but unfortunately our baggage containing the grub was back on the plane and could not be unloaded – so it took a whip round on what was in everyone’s hand luggage to provide some sustenance.

The efforts of our catering team produced a meal in the airport  restaurant and we arrived at the hotel around 2am GMT.

Orders were for an 8am alarm call in preparation for a 9am departure on the second leg to Tblisi.  Those above the third floor had a cold water shower and a lucky few found some coffee and stale rolls in the restaurant during a further wait until 11am when the bus eventually arrived for the five minute back to the Airport.

We eventually took off just after noon and arrived in the Georgian capital at 4pm local time.  Our hosts had literally been awaiting us since the previous night with no word on our whereabouts. 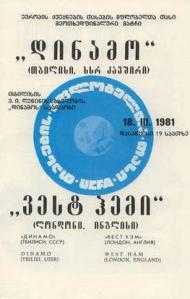 From thence on it was roses all the way.  Our hosts catered for our needs and entertainment in various ways.  For the players it was training in the Olympic stadium – indeed being allowed to use the Dinamo Sports Science Complex – a real honour for the club.

The match is dealt with elsewhere but a 1-0 victory for the Hammers was a great result, although it was the Russians who went through on aggregate.

And then we came to the journey home.  We arrived at Tblisi airport to find that our plane was still some 1,500 miles away in Moscow.  Thanks to our hosts we at least had some food as they had given us all before we left, not knowing when our next meal would come from.  We were luckier this time at Moscow airport as it only took two and a half hours to be processed through a deserted airport, although a few questions arose over some of our declarations.

For instance Trevor Brooking’s “cash declaration” showed that he had more sterling to bring out than he brought in thanks to Trev’s card school win that took some careful explaining.

Twenty seven hours after we left we landed at Stansted airport in Essex, and with a day and a half until we faced Oldham Athletic.  The club would like to thank all those who helped make the 8,000 mile trip as smooth as possible, especially Tescos for kindly donating some steak for the players.”

An interesting summary of what travel was like then.  Dynamo went on to win the European Cup Winners Cup in that season before slowly fading into the background of Soviet football.   Chivadze stayed at Tbilisi his whole career, making nearly 350 appearances for them before going on to coach the Georgian national side on two separate occasions.

Footballers today with their private jets don’t know they are born and what happened to those disciplinary rules?  Can you imagine them in force today?  Ronaldo and Drogba would be permanently banned!  Can I have the number for FIFA please?