It was only fit that West Ham’s official opening game in their new home was actually taking place three days after they first played here.  After all, having “turned the lights out” at The Boleyn Ground in the final home game of the season against Manchester United back in May, they then proceeded to host a number of other games there.  Every time you think that the club have turned a new leaf and rid itself of making mistakes, along comes another example of organisation curtosey of Captain Cock-up.  In this instance, the game against Juventus was announced prior to the end of the season when the club was still involved in the chase for Europa League (and even Champions League).  Surely, someone, somewhere in the upper echelons at the club must have said “hang on chaps, what if we qualify for Europe?”.  Still at least we have the co-Chairman’s son to spout rubbish every day.

This would be a real test of logistics.  Thursday had seen nearly 55,000 leave the ground after the 3-0 win in the Europa League without many issues.  Today would see a similar number having to negotiate tens of thousands of shoppers plus the crowds heading to the “urban beach” next to the stadium.  The route to the stadium took us through the shopping centre where blue-rinsed shoppers berated the Hammers fans for delaying the opening of Marks & Spencers.  “Oi! I want to buy my bloody Sunday lunch for my old man.  But no! I have to wait for you lot”.

The club had promised that unauthorised street traders would be banished from the area around the stadium, so no badgeman or old programme stall.  However, it seemed acceptable that ticket touts and half ‘n’ half scarf sellers were allowed to peddle their wares.  I could rant here about intellectual property abuse but I don’t think the club actually cares.

The stadium certainly looked magnificent from the outside.  The “wrap” around the perimeter featured some of the current squad, which is a bit dangerous as and when they may leave, as well as silhouettes of various players such as Noble and Payet.  Entry was painless but then you hit the first issue.  The queues for food and drink stretch along the concourse, meaning as you enter you have to negotiate through a line of queuing fans.

Just behind those concession stands was a temporary bar set up selling Iron Ale (there is also supposed to be Boleyn Bitter somewhere around), a beer mysteriously brewed specifically for the club and the ground (and at £4.90 a pint).  Once again, you get the feeling that the club could have done something with the pricing on food and drink, but decided not too.

As we made our way to the seats we found plastic bags on our seats.  “We’ve paid them £1,000 and all we get is a bloody plastic bag” was the response from my neighbour.  Apparently, when you held them all up it spelt out “Come on you Irons!” but we didn’t know that.  The whole opening ceremony was a little bit strange.  There had obviously been a few bits taken from the European Championships, whilst the fireworks added to the occasion but it did seem a little bit unorganised. 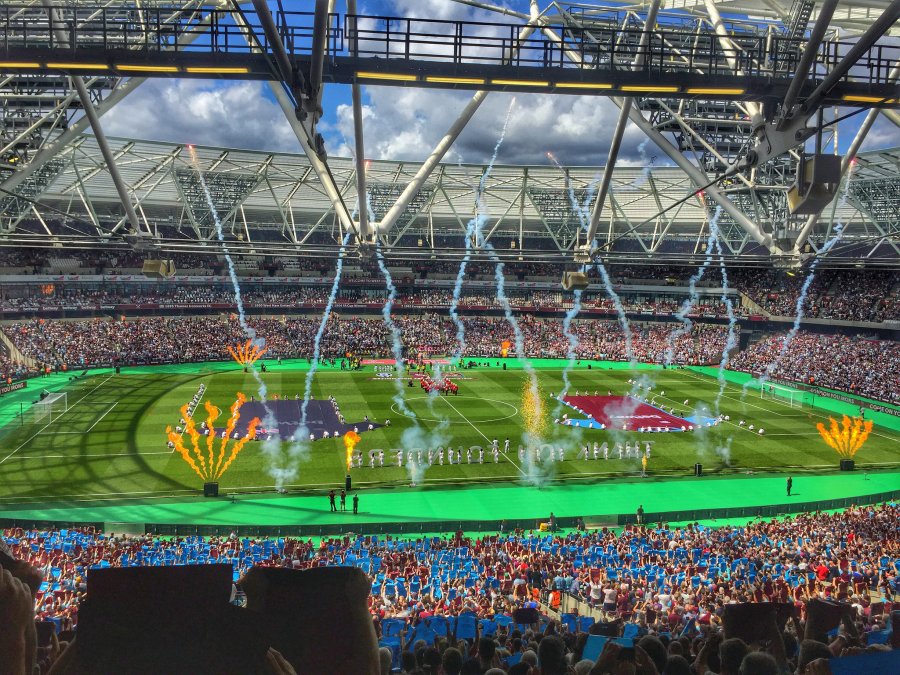 West Ham would be wearing their new third kit which for once one that most fans bought into.  In commemoration of the first season at the stadium the club had permission to wear a black (or very dark blue) kit that had the badge of Thames Iron Works (TIW in case you see the initials later in the season) rather than the new West Ham badge.

Despite all of the reservations, the political arguments and the rights and wrongs of their residence at the stadium, there was no going back.  Bilic fielded a strong starting XI with the impressive Nordtveit in the holding role whilst Josh Cullen was thrown in at the deep end, coming up against players like Dani Alves.  Whilst the result was in some ways unimportant, the fans wanted to see some of the flair that had seen West Ham challenge at the top end of the table last season.

West Ham United 2 Juventus 3 – The London Stadium – Sunday 7th August 2016
At the end of the day, it was irrelevant who won “The Betway Cup Final”.  Today was all about the Stadium.  Quite how Juventus went from dominating a game, with levels of possession in the 80 percentile in the first half, to nervously defending with five minutes to go to stop West Ham taking the lead I will never know.  If there was ever a definition of the gap between Champions League and Europa League then just watch the first 30 minutes of this game.  This was of course a Juventus side without Paul Pogba who had handily hitched a lift to London to sign for Manchester United.

The close passing play of the Italians was a pleasure to watch.  Both of their well worked early goals, scored by Paulo Dybala and Mario Mandzukic, were applauded by the West Ham fans as well as the small group of Juve supporters in the Sir Trevor Brooking Stand.  Then all of a sudden we clawed our way back into the game as Carroll scrambled home a loose ball after 38-year-old Gianluigi Buffon had made a great save from his headed effort.  Two minutes later the woodwork and a combination of Carroll, Adrian and Reid somehow kept out Alex Sandro’s effort.

The second half saw a slow trickle of substitutions with Bilic, patrolling the biggest technical area in world football, blooding a number of his new signings including Fletcher and Quina, some of the promising youngsters such as Oxford, Burke and Page plus of course, the man of the moment Dimitri Payet who made his entrance in the 74th minute to a standing ovation and a chorus of his song.

Nobody had any idea what would happen if it ended 2-2 at the end of 90 minutes.  There was no reference to details in the programme nor was there any announcement made.  With just five minutes left it became academic when Zaza finished neatly after a through ball from Marrone, the queue for thousands of fans to make their way to the exits.

Whilst the vast majority of fans headed to the shopping centre to deliver chaos and carnage to the blue-rinse brigade, I took a left and went to Stratford International where I walked straight onto a train bound for Ebbsfleet and the waiting CMF.  Exactly 30 minutes after leaving my seat I was in the car.  Alas, that 12 minute train journey costs an eye-watering £16 one way.  Surely someone at the club or South Eastern railway realises there is a huge opportunity to alleviate some of the issues by making the route cheaper on a match day?   Or am I simply talking common sense again?

It’s far from ideal to be a football stadium that will please everyone.  Sitting in the Upper Tier you are along way from the action (everyone would really need binoculars higher up in the stands) and any atmosphere soon dissipates.  That may change when fans have their assigned seats come the start of the Premier League season.  The outside of the stadium looks fantastic, the inside still unfinished with the troublesome gaps where the retractable seating is.  But if the club gets 54,000 for every game will they really care?