My original ticket application for the European Championships was divided into two distinct trips that would essentially have taken in a game in every venue, working my way up the country with a small break in the middle. Five years ago, whilst travelling between Trnava in Slovakia and Budapest, the idea of touring France had first been discussed. During the course if the evening we’d decided to buy an old London double-decker bus, do it up with sleeping quarters upstairs and a bar downstairs. What more could we want.

There were a couple of stumbling blocks. First there was the small matter of finding £30,000 for a bus. Surely a company out there would want to sponsor us? A brewery for instance? I’m sure that Meantime and Fullers will one day answer but it’s a big too late. Then there was the issue of driving. It was great that Danny, Deaksy and Stoffers contributed to the idea but none of them could contribute to the actual driving. I didn’t really want to be the Reg Vardy of the group if truth be told. Finally, there was the issue of trying to get tickets for the games we wanted.

When the original ticket allocations were announced our hopes of a Summer Holiday were dashed. Two tickets for two games over a week apart at opposite ends of the country put pay to our great ideas.

So after the trip to the chic and sunny Riviera I was now heading to the gloomy coal fields of Pas-des-Calais swapping the Promenade des Anglais for the slag heaps of Lens, with the ginger bearded wonder James Boyes at my side.

Despite the industrial hinterland, for football lovers you can’t go wrong with a visit to Lens. There’s no surprise that the town, where the whole population could fit into the football ground and still have a few spares, is a favourite when tournaments come a-knocking. And not just football either – the Stade Bollaert-Delelis has hosted games in the Rugby World Cup (twice) too. It is one of the most atmospheric grounds in France, built in a style not too dissimilar to Villa Park or a slim-downed St James’ Park (Newcastle United not Exeter City), which rocks on a match day.

A few years ago I read a story about the number of English-based fans who had season tickets for RC Lens. Fed up of the spiralling cost of tickets for the sanitised Premier and Football League games, groups of fans realised that it was cheaper and in some cases, quicker to head across the Channel and watch their football. From leaving TBIR Towers the 116 mile drive took around 3 hours including the time on Eurotunnel and cost less than £80. Add in a season ticket in the Delacourt Stand behind the goal at a ridiculous €125 for the 19 league games and you have a great day out.

The ground is not only really easy to find but also has plenty of street parking within a ten minute walk. We dropped the car off and headed into the town centre to find a spot to watch whether Northern Ireland could upset the odds and get a result from their game against Germany. There aren’t many drinking options in Lens and even less that had a TV so we attempted to go into the Fanzone.

If you want evidence that the pen is mightier than a sword then go and visit the UEFA Fanzone in Lens. Anyone trying to enter the area with such offence weapons as a pen, an iPad mini or even a keyfob with a badge on will be denied entry. Six foot flag pole? Come on in sir! Of course, I may have been singled out by a West Ham (key fob), technophobe who favoured the quill but I doubt it. I was denied entry, much to the amusement of James, and the chap who managed to sneak in a pack of beers whilst the stewards attention was drawn to my pen. Another example of the head-scratching, juxtaposing, randomness of everyday life in France.

Fortunately we found a bar that had converted it’s back yard into a “stadium”, as the signs read. The rows of plastic chairs were hardly The Emirates but it did the job and provided shelter from the impending doom that the dark clouds overhead were threatening before we headed to the stadium. Both sets of fans mingled without any sign of any problems whilst hundreds of individuals lined the route back to the stadium trying to sell spare tickets – it was certainly a buyers market with some fans who were prepared to hold their nerve being able to pick up a bargain as kick off approached. Once again, entry into the ground was swift with little regard paid to the contents of my bag (the lethal pen, mini iPad and key fob) or any checks on whether I was the named individual on the ticket (I was).

The two sets of fans were giving it their all in the build up to kick off. Both could still progress even though they only had one point between them such was the complexity and confused caused by the third place situation with a win, although based on their poor showing in their opening two games the odds were stacked against the Turks. But perhaps their fans could lift them at the eleventh hour and give them a chance of a few more days in the competition?

Czech Republic 0 Turkey 2 – Stade Bollaert-Delelis – Tuesday 21st June 2016
It wasn’t just the Turks who were dancing in the streets of Lens at the full-time whistle. The two-nil win meant that Northern Ireland would also progress to the second round joining the Turks who simply blew the Czech Republic away in a performance that was up there with the best in the tournament. 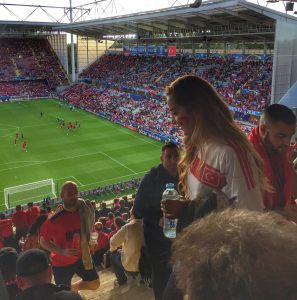 It took just ten minutes for the Turks to take the lead. The impressive Arda Turan played in young full-debutant Emre Mor down the right and his perfect cross was met at the near post by Burak Yilmaz to fire home, giving Petr Cech no chance. The celebrations both on and off the pitch were fuelled as much by relief as delight – the Turks had been disappointing up until this point on the tournament.

The Czechs immediately responded. Tomas Sivok powered a header from a corner against the base of the post, full-back Pavel Kadeřábek wasted a couple of good chances and Jaroslav Plašil seeing a vicious long-ranger tipped over the bar. But they were ultimately undone by a second goal from Turkey scored in the Ozan Tufan in the 65th minute, smashing the ball home after the Czechs couldn’t clear their lines.

The Turkish fans at the far end responded by lighting flares. Not just one but at one point we counted eleven. A number of Turkish players ran to the crowd to plead with the fans but they needn’t have worried – UEFA appear to have turned a blind eye to the incident despite once again it underlined the appalling lax security on getting into the ground. I’m sure if the incident was reported it would have been blamed in England fans. 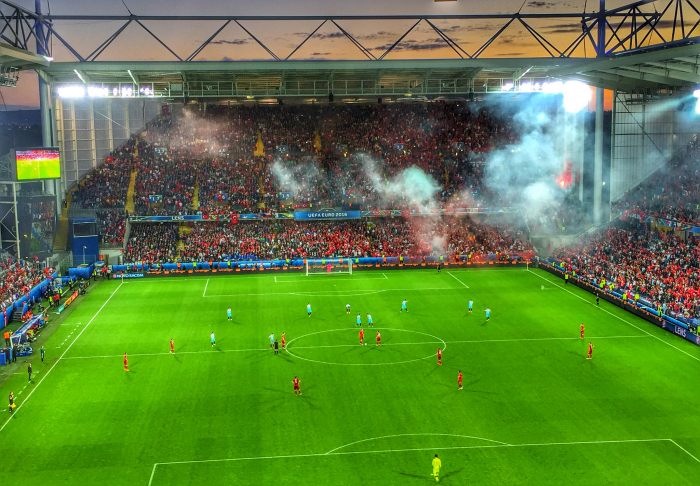 The atmosphere for the whole games was up there with the best I’ve experienced. Two hours of intense noise. I had to drag James away at the end – being a Man United fan he’s not used to an atmosphere. Seventy five minutes after leaving the ground we arrived at the terminal at Calais.

“Where have you been lads?” Asked the UK Border Guard.